KYIV, Ukraine — More than two months before the phone call that launched the impeachment inquiry into President Donald Trump, Ukraine’s newly elected leader was already worried about pressure from the U.S. president to investigate his Democratic rival Joe Biden.

Volodymyr Zelenskiy gathered a small group of advisers on May 7 in Kyiv for a meeting that was supposed to be about his nation’s energy needs. Instead, the group spent most of the three-hour discussion talking about how to navigate the insistence from Trump and his personal lawyer, Rudy Giuliani, for a probe and how to avoid becoming entangled in the American elections, according to three people familiar with the details of the meeting.

They spoke to The Associated Press on condition of anonymity because of the diplomatic sensitivity of the issue, which has roiled U.S.-Ukrainian relations.

The meeting came before Zelenskiy was inaugurated but about two weeks after Trump called to offer his congratulations on the night of the Ukrainian leader’s April 21 election.

The full details of what the two leaders discussed in that Easter Sunday phone call has never been publicly disclosed, and it is not clear whether Trump explicitly asked for an investigation of the Bidens. 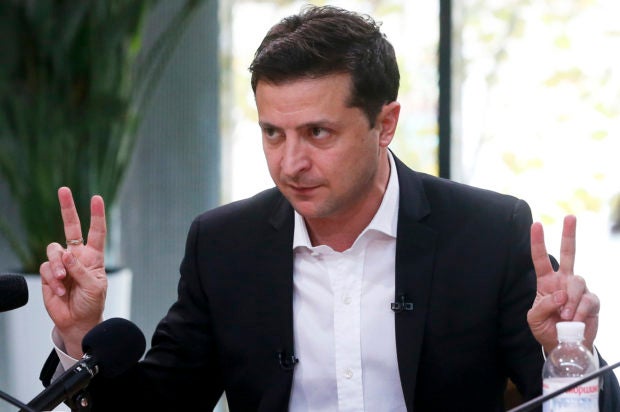 The three people’s recollections differ on whether Zelenskiy specifically cited that first call with Trump as the source of his unease. But their accounts all show the Ukrainian president-elect was wary of Trump’s push for an investigation into the former vice president and his son Hunter’s business dealings.

Either way, the newly elected leader of a country wedged between Russia and the U.S.-aligned NATO democracies knew early on that vital military support might depend on whether he was willing to choose a side in an American political tussle. A former comedian who won office on promises to clean up corruption, Zelenskiy’s first major foreign policy test came not from his enemy Russia, but rather from the country’s most important ally, the United States.

The May 7 meeting included two of his top aides, Andriy Yermak and Andriy Bogdan, the people said. Also in the room was Andriy Kobolyev, head of the state-owned natural gas company Naftogaz, and Amos Hochstein, an American who sits on the Ukrainian company’s supervisory board. Hochstein is a former diplomat who advised Biden on Ukraine matters during the Obama administration.

Zelenskiy’s office in Kyiv did not respond to messages on Wednesday seeking comment. The White House would not comment on whether Trump demanded an investigation in the April 21 call.

The White House has offered only a bare-bones public readout on the April call, saying Trump urged Zelenskiy and the Ukrainian people to implement reforms, increase prosperity and “root out corruption.” In the intervening months, Trump and his proxies have frequently used the word “corruption” to reference the monthslong efforts to get the Ukrainians to investigate Democrats.

Trump has said he would release a transcript of the first call, but the White House had no comment Wednesday on when, or if, that might happen.

After news broke that a White House whistleblower had filed a complaint about his July 25 call with Zelenskiy, Trump said the conversation was “perfect” and that he had asked his Ukrainian counterpart to do “whatever he can in terms of corruption because the corruption is massive.” 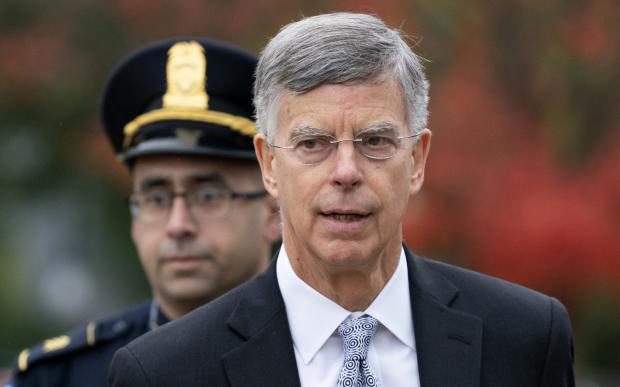 Ambassador William Taylor is escorted by U.S. Capitol Police as he arrives to testify before House committees as part of the Democrats’ impeachment investigation of President Donald Trump, at the Capitol in Washington, Tuesday, Oct. 22, 2019. (Photo by J. Scott Applewhite / AP)

During the call, Trump asked Zelenskiy for “a favor,” requesting an investigation into a conspiracy theory related to a Democratic computer server hacked during the 2016 election campaign. Trump also pushed Zelenskiy to investigate Biden and his son. Trump then advised Zelenskiy that Giuliani and Attorney General Bill Barr would be contacting him about the request, according to a summary of the called released by the White House.

Within days, Giuliani flew to Madrid to meet privately with Yermak, Zelenskiy’s aide who was in the May 7 meeting.

Trump has denied that an investigation of Biden was a condition for releasing military aid as a quid pro quo. But on Tuesday, the senior U.S. diplomat in Ukraine at the time, Ambassador William Taylor, starkly contradicted the president, saying that Trump had demanded that everything Zelenskiy wanted, including the aid and a White House meeting, was conditional on a public vow that he would open an investigation.

Taylor also detailed multiple previously undisclosed diplomatic interactions between Trump’s envoys and senior Ukrainian officials in which the president’s demand to investigate the Bidens in exchange for American aid was clear.

The continued flow of high-tech U.S. weaponry is seen as essential to the survival of the Ukrainian government, which has been mired in a long-running war with Russian-backed separatists in the east of the country. In 2014, masked Russian troops took control of Ukraine’s Crimean Peninsula. Russia later annexed it, provoking Western sanctions against Moscow.

In a joint September 25 news conference with Trump at the United Nations in New York, Zelenskiy denied he felt pressured to investigate the Bidens.

“I’m sorry, but I don’t want to be involved, to democratic, open elections of U.S.A.,” the Ukrainian leader said. “We had, I think, good phone call. It was normal. We spoke about many things, and I think, and you read it, that nobody push it. Push me.”

Trump then chimed in: “In other words, no pressure.”

Before Zelenskiy was elected, however, a public campaign to initiate investigations into the Bidens was already underway.

For weeks, conservative media outlets in the U.S. had trumpeted unfounded accusations that Biden, the Obama administration’s top envoy to the war-torn former Soviet republic, had sought the removal of the country’s top prosecutor in order to stymie an investigation in Burisma, a Ukrainian energy company that later hired his son to serve on its board.

Both Trump and Giuliani made public comments and tweets referencing the Biden accusations, with the president’s lawyer suggesting in a Fox News interview on April 7 that the U.S. Justice Department should investigate the matter.

One day before Zelenskiy’s May 7 meeting with his advisers, the U.S. State Department recalled Ambassador Marie Yovanovitch, a career diplomat with a reputation for combating corruption. Yovanovitch had been the target of a sustained yearlong smear campaign by Giuliani and his associates.

When Trump called Zelenskiy on July 25 to congratulate the Ukrainian president on “a great victory” after his Servant of the People party won control of Ukrainian parliament, Zelenskiy downplayed his discomfort.

“The first time, you called me to congratulate me when I won my presidential election, and the second time you are now calling me when my party won the parliamentary election,” Zelenskiy said, according to the rough transcript. “I think I should run more often so you can call me more often, and we can talk over the phone more often.” /kga