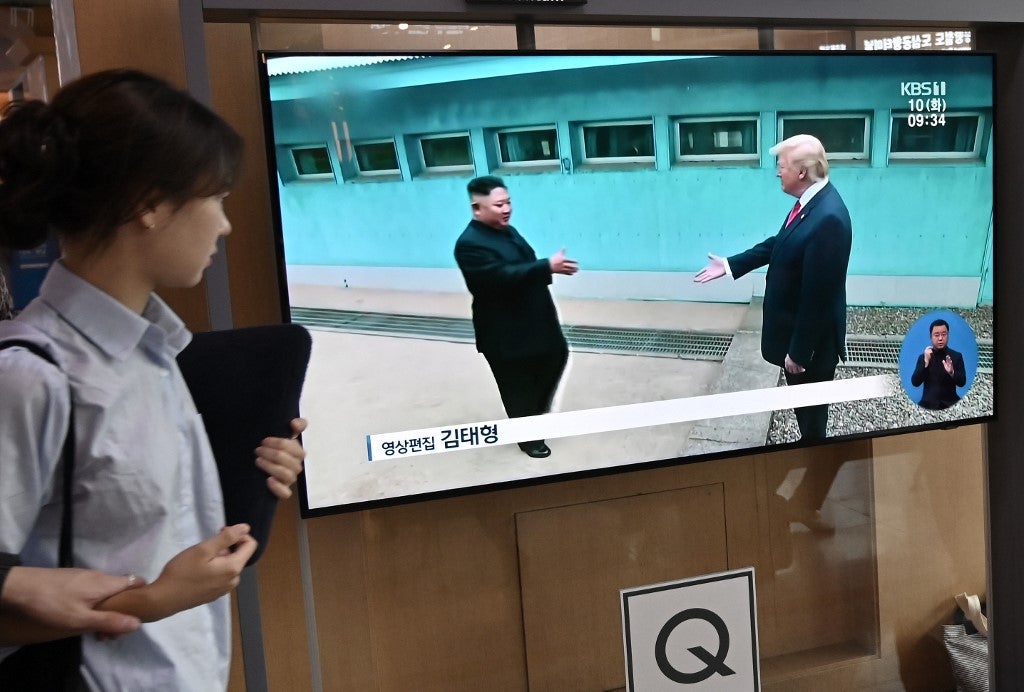 A woman walks past a television news screen showing file footage of a meeting between US President Donald Trump and North Korean leader Kim Jong Un at the truce village of Panmunjom, at a railway station in Seoul on September 10, 2019. (Photo by Jung Yeon-je / AFP)

Analysts said the comments were an indication Pyongyang still hoped to reach a deal directly with Trump over its nuclear programmes, despite Washington’s longstanding insistence it give up its weapons before sanctions are lifted.

In a statement carried by Pyongyang’s official news agency KCNA, foreign ministry adviser Kim Kye Gwan said he had met the North Korean leader “a few days ago”, and “he said that the relationship between him and President Trump is special”.

The report came just days after Trump said of Kim: “I like him. He likes me. We get along. I respect him. He respects me.”

Analysts say the North is looking to exploit the relationship between Kim and Trump — a former real estate mogul who sees himself as a master negotiator — to secure US concessions in nuclear talks.

It has previously praised Trump’s “extraordinary courage” while repeatedly demanding Washington come forward with a “new method” by the end of this year.

Pyongyang understands US officials will oppose the lifting of sanctions before denuclearisation and therefore it wants to “negotiate directly with Trump,” Koh Yu-hwan, a professor of North Korean studies at Dongguk University in Seoul, told AFP.

“The North is sending a message that unless Trump makes the call, the talks will fall through and that they are now at a crossroads,” he said.

Adviser Kim told KCNA that Washington policymakers were hostile to Pyongyang and “preoccupied with the Cold War mentality and ideological prejudice.”

“I sincerely hope that a motive force to overcome all the obstacles… will be provided on the basis of the close relationship,” he added.

After trading threats of war and insults in 2017, the two leaders held a high-profile summit in Singapore last year, with Kim signing a vague pledge to work towards “denuclearisation of the Korean peninsula.”

But negotiations stalled after an unsuccessful second summit in Hanoi in February, and earlier this month the North broke off the latest round of working-level talks in Sweden.