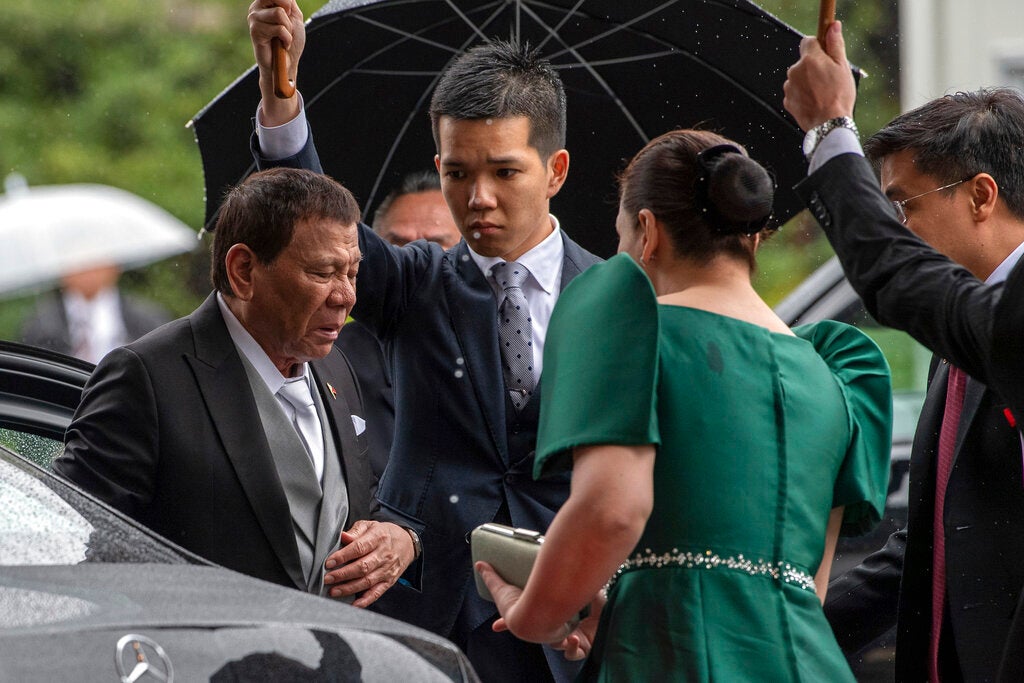 President Rodrigo Duterte arrives to attend the enthronement ceremony of Emperor Naruhito of Japan at the Imperial Palace on Tuesday, Oct. 22, 2019 in Tokyo. Duterte cut short his trip to Japan due to “unbearable pain” in his spinal column.  (Pool Photo via AP)

MANILA, Philippines — While there is no need  to undergo any surgical procedure after feeling unbearable pain in his spinal column, President Rodrigo Duterte has been advised to limit his physical activities.

Presidential spokesperson Salvador Panelo said Duterte needed to take a rest as advised by his doctor after he underwent a magnetic resonance imaging (MRI) and medical evaluation on Wednesday.

“He was diagnosed to be having muscle spasms causing what he described to be an unbearable pain at the pelvic and spinal area of his body,” Panelo said in a statement.

“The Chief Executive has been advised by his doctor to rest for a couple of days and limit his physical activity, particularly avoiding standing or walking for long duration,” he added.

Duterte cut short his trip to Japan due to “unbearable pain” in his spinal column. The 74-year-old president attended Japanese Emperor Naruhito’s enthronement ceremony in Tokyo on Tuesday, at times using a cane and appearing to stand stiffly.

The doctor said Duterte’s motorcycle accident on October 17 and another motorbike accident years ago “may have caused or possibly aggravated the current pain he is suffering from in his lower back,” Panelo said.

“The President was advised by his doctor to rest, as well as to take medicines that will relieve him of the pain caused by the muscular spasms. His doctor ruled out any surgical procedure for the President,” he said.

“The Palace assures our countrymen that they need not worry about the President’s health,” he added.

He assured the public that “the President is presently feeling much better.”

“Despite the limited physical activity that he has to impose on himself,” Panelo said  “the President will meet Chinese Vice Premier Hu Chunhua today (October 24) to discuss, among others, certain infrastructure projects in the country which are financed by China.”

“Despite the President’s somewhat impaired physical profile,” he added that the Dutette would “continue to perform his presidential duties, which include attending to local and foreign engagements in the following days, with the same passion and dedication, in obedience to the constitutional command to serve and protect the Filipino people.”

A lack of regular medical bulletins on the president’s health has sparked sporadic speculation about the state of his health, especially when he failed to appear in public for days in recent times.

When Duterte did not show up in public for more than a week in August, Panelo explained that the president was busy reviewing documents he needed to sign but stressed he was healthy because he even managed to bike around in Davao. With Associated Press