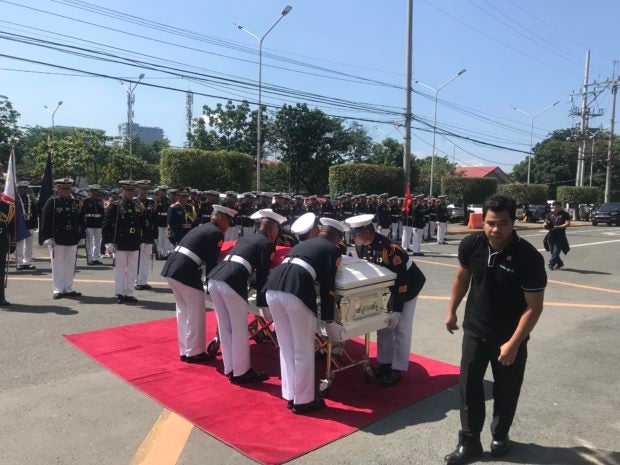 The casket of former Senate President Aquilino “Nene” Pimentel Jr. was taken to the Senate for a necrological service on Wednesday, Oct. 23, 2019. (Photo by Christia Marie Ramos / INQUIRER.net)

MANILA, Philippines — Kind words and tears flowed as the family, friends, and ex-colleagues of former Senate President Aquilino “Nene” Pimentel paid their respects to the late statesman on Wednesday.

The remains of the Pimentel patriarch was received at the Senate building’s main entrance with military honors and a Philippine flag draped over his casket.

Pimentel’s casket was moved to the Senate session hall where a room full of former and current senators awaited the arrival of his remains.

Old and young senators stood beside the casket to pay their respect and remember him.

[It is possible to enter politics and still leave it with dignity.]

Before this, he commended Pimentel’s “humility, simplicity of style, and decorum” as a member of the upper chamber of Congress.

“If social justice, courage and the crafting of laws were to assume a human form, in all probability, that person would be Senate President Aquilino ‘Nene’ Pimentel Jr.,” he said.

“To him the term statesman would be more appropriate, rather than politician. He was in the mold of old school scholarliness and fervor, akin to a Filipino Thomas More,” he added.

Aside from Sotto, incumbent Senators Risa Hontiveros and Pia Cayetano also grieved the loss of a father figure and someone who Cayetano described as a “brilliant legislator and defender of democracy.”

“I lost a father, a teacher and friend. That’s how sad I am with the passing of former Senate President Aquilino ‘Nene’ Pimentel Jr.,” said former Sen. Jose Lina Jr.

“Truly, the nation lost a legend, an ideal public servant, fearless defender of democracy, a prolific speaker and writer, a great teacher, legislator and executive, a faithful husband to Bing, a doting father to six children, a loving friend, and most of all, a prayerful person, and a god-fearing citizen of this beloved Philippines,” he added.

In the middle of his eulogy, former Sen. Rene Saguisag reminisced on his and Pimentel’s good old days as he sang “You Are My Sunshine.”

READ: ‘You are my sunshine’: Rene honors, bids goodbye to friend Nene

He also thanked Pimentel for setting an example to future lawmakers.

Pimentel’s son, incumbent Sen. Aquilino “Koko” Pimentel III, broke down in tears as he grappled with the idea of saying goodbye to “someone as special” as his father.

He also expressed gratitude over the outpouring of love to his “Tatay Nene.”

“So we, his children and grandchildren are very happy to know that our father and grandfather has touched and affected so many lives, we are proud that so many consider themselves adopted sons and daughters of our Tatay Nene,” he said.

Senators expressed their condolences to Pimentel’s family through Senate Resolution No. 168, which was adopted during the necrological rites.

The resolution highlighted Pimentel’s political achievements of in the executive and legislative branches of the government.

“The Honorable Aquilino ‘Nene’ Quilinging Pimentel Jr. (was) a distinguished public servant, a fearless human rights lawyer, parliamentarian, and legislator, a staunch defender of democracy, a family-oriented and religious man, and the Father of the Local Government Code,” Senate Secretary Myra Villarica said as she read the resolution.

The resolution underscored the late lawmaker’s sterling public service “in his almost five decades of illustrious and unblemished career as a public servant.”

Pimentel first became a member of the Senate after the 1986 People Power revolt, serving from 1987 until 1992, crafting significant laws, including the Organic Act of the Local Government Code.

His last government post was a member of the Consultative Commission which President Rodrigo Duterte created in 2018 to review the 1987 Constitution, it added.

Pimentel died on Sunday, less than a week after he was put in an intensive care unit (ICU) last Oct. 14. He was 85 years old.