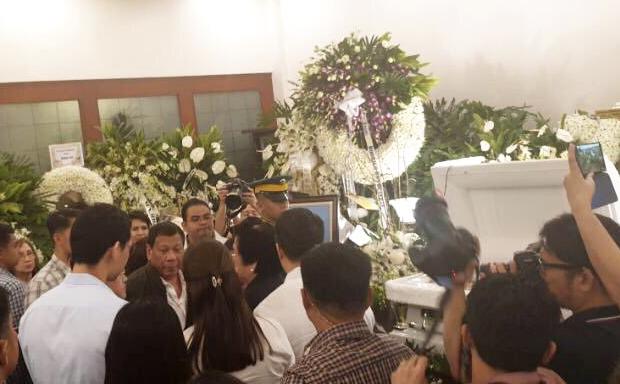 President Rodrigo Duterte went straight from his trip to Japan to the wake of former Senate President Aquilino Pimentel Jr. on Tuesday, Oct. 22, 2019. (Photo from PDP-Laban)

MANILA, Philippines — Sen. Aquilino “Koko” Pimentel III was responding to eulogies from friends of his late father, former Senate President Aquilino “Nene” Pimentel Jr., when he suddenly stopped and started sobbing inside the Senate session hall where the necrological service was held on Wednesday morning.

His pregnant wife, Kathryna, rushed to his side and handed him a white handkerchief. The coupled had been struggling to hold back their tears as they listened to speeches from incumbent and former senators who had learned how to be legislators at the knee of the elder Pimentel.

“I am so proud to say many consider themselves adopted children of our Tatay,” the senator said before he was overcome by emotion.

“A priest once said in a homily, ‘Your life is God’s gift to you. How you live your life is your gift to God.’ What my Tatay believed in private is what he showed in public,” he said.

For about an hour, Pimentel’s widow, Lourdes, or Bing, his six children and other relatives listened as former colleagues recalled his humility, selflessness and staunch refusal to surrender to adversity.

Pimentel died of lymphoma early on Sunday morning. He was 85 years old.

The freedom fighter who started his political career as a delegate to the 1971 Constitutional Convention would go on to become mayor of Cagayan de Oro City.

Former Sen. Rene Saguisag described Pimentel as “this rising star from Mindanao” in the early 1970s. As their friendship grew, their families became closer, he said.

“There can be no Nene without Bing. Just as there could be no Rene without Dulce,” he said, referring to his wife who died in a vehicular accident a few years back.

Turning to Pimentel’s coffin, Saguisag made one request to his old friend: “Please tell Dulce I have carried out my promise that I’d never look at another woman again. Wink, wink!”

Pimentel is mourned by many who considered him a great statesman who fought for democracy and human rights against dictator Ferdinand Marcos and was jailed several times during martial law.

He was elected senator in 1987 and made his mark in Philippine legislation by authoring the game-changing Local Government Code of 1991.

Senate President Vicente Sotto III said Pimentel was the rare breed who did not let politics stain his integrity. He thanked Pimentel for showing that it was possible “to enter politics and leave with honor still intact.”

Senators from the Congress that was restored after the 1986 Edsa People Power Revolution wore black armbands when they delivered their eulogies.

“He showed me how to survive with core values intact,” he said. “For him, personal credit was not important. If you want something done quickly, give up the credit.”

He added that it was Pimentel’s lessons in humility that helped him ignore “that disembodied voice that tells a senator, ‘You will be the country’s next President.’”

Former Sen. Jose Lina Jr. said he was proud to have been Pimentel’s “errand boy” who, as a fresh law graduate, was being initiated into politics in 1982 with the task of distributing press releases for the Filipino Democratic Party.

Lina said that it was with “unpretentious humility” that Pimentel gave way to Salvador Laurel to become Corazon Aquino’s running mate in the 1986 snap presidential election.

Former Sen. Heherson Alvarez recalled that Pimentel gave his $200 pocket money to Filipino exiles in the United States who fought the Marcos regime.

“Nene fought openly and that’s how he was seized and incarcerated. I escaped,” Alvarez said.

Former Sen. Nikki Coseteng said it was Pimentel who taught her the value of not giving up, to have “conviction even when not convenient, statesmanship even if not fashionable.”

Sen. Risa Hontiveros of the minority bloc recalled one of the last times she spoke with Pimentel, which was at the height of Senate hearings on the Charter change bill.

“I’ve been there in the Senate before, like you. It’s difficult to be a (member of the) minority. But regardless, keep fighting,” Hontiveros, her voice cracking, quoted Pimentel as telling her.

Pia Cayetano, then a junior senator and Pimentel’s seat mate, said she could not recall “Tito Nene saying an unkind word about someone.”

On a lighter note, Cayetano—whose marriage was annulled in 2013—was surprised one day when Pimentel said she deserved “to be happy and have a good man” and introduced her to someone.

She refused to disclose other details, only saying that “it will remain forever a Pimentel and Cayetano family secret.”

President Duterte paid his last respects to Pimentel at Heritage Memorial Park upon his return from Japan on Tuesday night.

Malacañang said Mr. Duterte considered Pimentel a personal friend and recognized the “valuable service to the country as a public servant” of the founder of the President’s party, the Partido Demokratiko Pilipino-Lakas ng Bayan.

The President had appointed Pimentel to the consultative committee to propose changes to the 1987 Constitution to facilitate the shift to a federal form of government.

Federalism was one of Pimentel’s advocacies, though efforts to change the country’s form of government were opposed by the government’s economic managers.

Filipinos from all walks of life, “including those wearing slippers,” as a member of the Office of the Sergeant at Arms noted, also paid their last respects to Pimentel.

John Osmeña and Eddie Ilarde, the two remaining surviving senators of the premartial law Senate, were also present. —With a report from Leila B. Salaverria