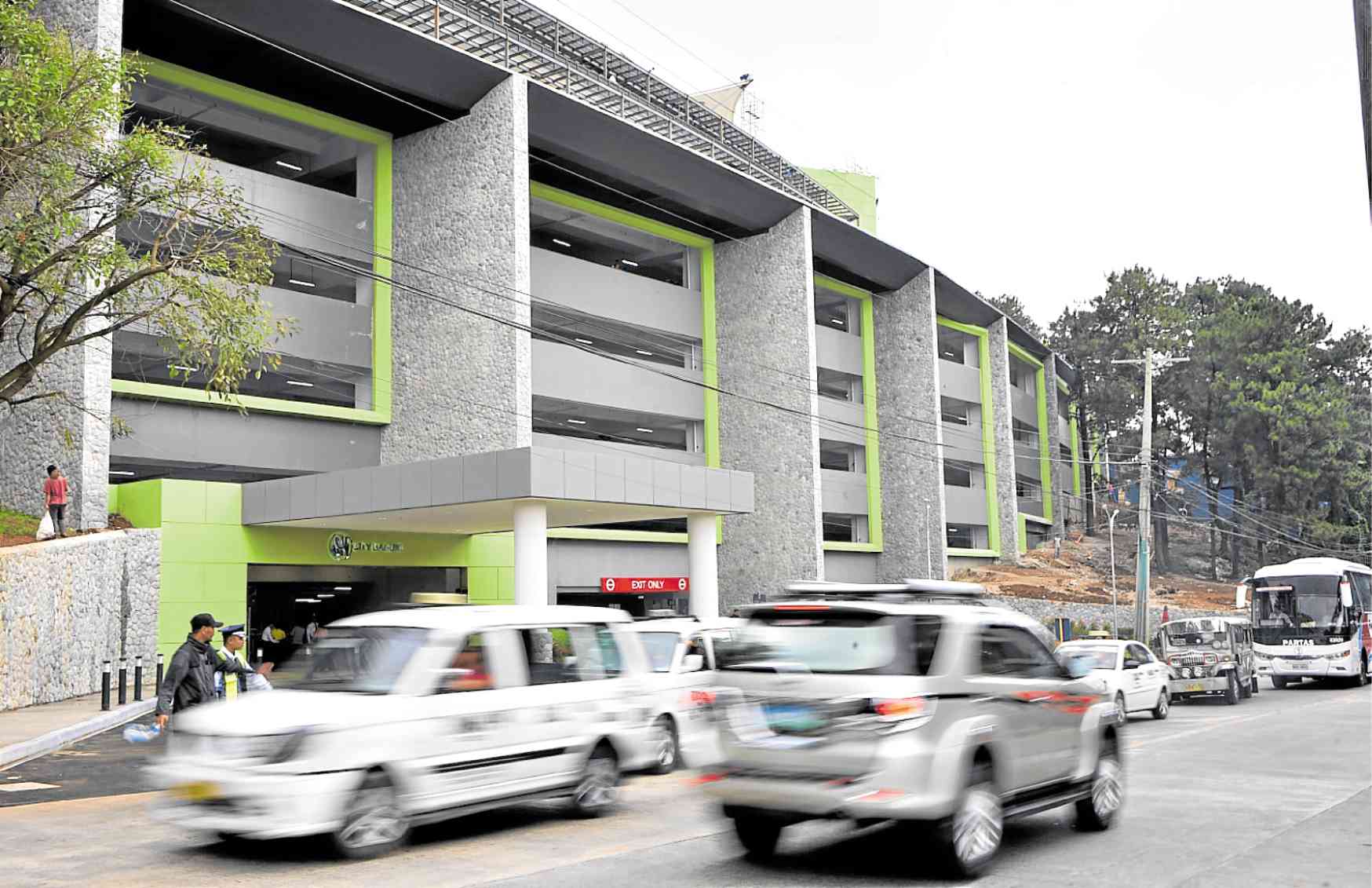 PARKING BUILDING Part of Baguio’s rehabilitation plans is the construction of parking buildings to reduce the number of vehicles clogging up traffic in the city. On Wednesday, a shopping mall chain opened a five-level parking building to accommodate about 700 vehicles.—EV ESPIRITU

The projects are part of a masterplan to be funded by next year’s city budget and by grants and loans to rehabilitate the city, Mayor Benjamin Magalong said in his state of the city address this week.

A proposed one-year moratorium on building constructions and tree cutting has been “approved in principle” by Malacañang, to allow the city government to grow pine tree saplings and rebuild the city’s forests.

From 2010 to 2015, Baguio’s built-up areas increased from 2,990 hectares (52 percent) to 3,561 ha (61.9 percent), reducing open forest cover in five years, said Ralph Pablo, director of the Department of Environment and Natural Resources in Cordillera.

But work must start on fixing the sewers, removing settlements along waterways and banning backyard piggeries, Magalong said, adding that Baguio is contributing to pollution along the Bued and Balili rivers that affects downstream communities of Benguet and La Union provinces.

The city failed to get approval of a P350-million fund for improving the city sewers and modernizing the sewage treatment plant but would partner in a joint venture deal with wastewater management firms, Magalong said.

The modern sewer lines need to be in place before the city government proceeds to build a P6-billion public market, which will be served by monorails and elevated walkways and roads.

A P10-billion credit facility offered by the Development Bank of the Philippines may allow the city to start work on the market between January and March next year.

Because Baguio will require “huge amounts of energy for many big city projects in the pipeline,” the city government is also keen on adopting a Japanese waste-to-energy program that would generate electricity to power some of its ambitious projects, including a monorail transit system, Magalong said.

Introduced in July by Toyo Energy president, Yoshimitsu Okada, the system would be fueled by Baguio garbage “which would not make the zero-waste movement happy,” De la Peña said.

About 40 percent of 168 tons of waste generated daily by Baguio households and businesses are biodegradable, based on a waste analysis and characterization study.

The plant can also get waste from Baguio’s neighboring towns and become a waste management project for an economic cooperative of towns called BLISTT (Baguio and the Benguet towns of La Trinidad, Itogon, Sablan, Tuba and Tublay), Magalong said.

He said the city submitted its “expression of interest” to pilot a “low-carbon urban transport system” to be undertaken here by the Department of Transportation.

He said Transportation Secretary Arthur Tugade had agreed to put up nonpollutive mass transportation such as monorails, cable cars and modern jeepneys.

The city government plans to put up four parking buildings all over Baguio and is reviewing proposals for parking and jeepney terminals at Burnham Park. —Vincent Cabreza

Read Next
Quake survivors in Davao del Sur take care of each other
LATEST STORIES
Jaja Santiago powers Japanese squad to semis stint
Neda seeks Congress OK of key economic bills before solons get busy for 2022 polls
Hotdog bassist Dennis Garcia remembered by daughter after his death: ‘Glad I have your songs’
House to hold crucial session in Batangas on Jan. 22
‘A greener, cleaner tomorrow’: A how-to guide for Filipinos who want to help with today’s energy crisis
MOST READ
Palace: Crisis over ABS-CBN franchise unlikely
Motorcycle taxis ‘illegal’ starting next week — LTFRB board member
Panelo: Duterte only wants to emulate strong political will of Marcos
Marcos monument beside Aquino’s stirs Tarlac town
Don't miss out on the latest news and information.