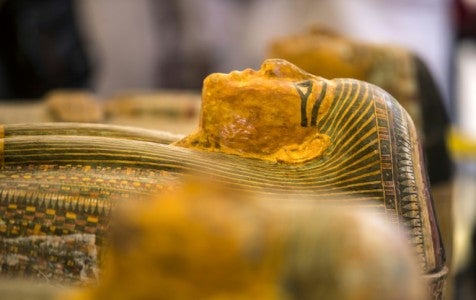 A wooden coffin on display in front of Hatshepsut Temple in Egypt’s Valley of the Kings in Luxor. Image: AFP/Khaled Desouki

Egypt revealed Saturday a rare trove of 30 ancient wooden coffins that have been well-preserved over millennia in the archaeologically rich Valley of the Kings in Luxor.

The antiquities ministry officially unveiled the discovery made at Asasif, a necropolis on the west bank of the Nile River, at a press conference against the backdrop of the Hatshepsut Temple.

“This is the first discovery in Asasif by dedicated Egyptian hands, comprised of archaeologists, conservationists and workers,” the head of the Supreme Council of Antiquities, Mostafa al-Waziri, told reporters. 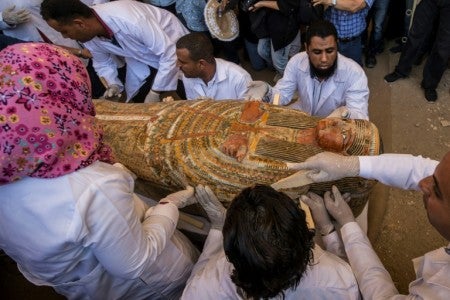 The 30 ornately decorated coffins of men, women and children were found only a meter (three feet) underground, stacked in two rows. They are believed to belong to family members of high priests.

Waziri explained that excavations of the site in the 19th century had revealed royal tombs, but this latest discovery had yielded a collection of priests’ burials.

The sarcophagi date back to the 22nd Dynasty, founded around 3,000 years ago in the 10th century BC.

Despite their age, black, green, red and yellow paintings of snakes, birds, lotus flowers and hieroglyphics that cover the coffins are still clearly visible.

A sealed coffin belonging to a young ancient Egyptian child was incomplete and unpainted.

“We only did remedial first-aid on these well-preserved coffins. They are considered to be in great condition because there were hardly any settlements” around the site, local antiquities ministry restorer Saleh Abdel-Gelil told AFP. 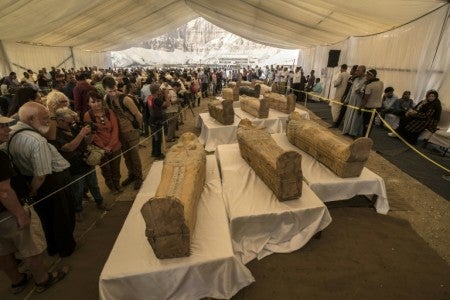 Tourists observe sarcophagi displayed in front of Hatshepsut Temple in Egypt’s Valley of the Kings in Luxor. Image: AFP/Khaled Desouki

Discoveries of ancient Egyptian relics had slowed after the 2011 Arab Spring revolution that toppled long-time autocrat Hosni Mubarak and plunged the country in political turmoil, according to antiquities minister Khaled el-Enany.

“Now in Egypt we have more security so we have more foreign nationals. We have more than 250 (archaeological) missions. More work equals more discoveries,” he told AFP on the sidelines of the press conference.

At Marsam, a boutique hotel in Luxor, the flurry of archaeological discoveries in recent years has translated into good business and foot traffic.

“You can say two years ago we noticed a difference. There was less than half the people that we have today,” said Birte Fuchs, a German who manages the Marsam with her husband and local partners. “Tourism is coming back.”

This year, over 11 million visitors traveled to Egypt, following a sharp dip in numbers after the revolution.

Egypt has sought to promote its archaeological heritage and finds in a bid to revive its vital tourism sector, which has suffered due to political insecurity and terror attacks.

However, critics point to archaeological sites and museums suffering from negligence and poor management. But Enany, the minister, remains upbeat.

“Some people, we don’t have to mention names, don’t want us to have these discoveries… that impress the world,” said Enany before throngs of tourists, referring to detractors. “These discoveries are priceless for Egypt’s reputation.”

Sporting his trademark cowboy hat, Egyptologist Zahi Hawass, who has consistently promoted his discoveries to a global audience, was also at Saturday’s unveiling. He took selfies with tourists who flocked to the coffins. IB/JB