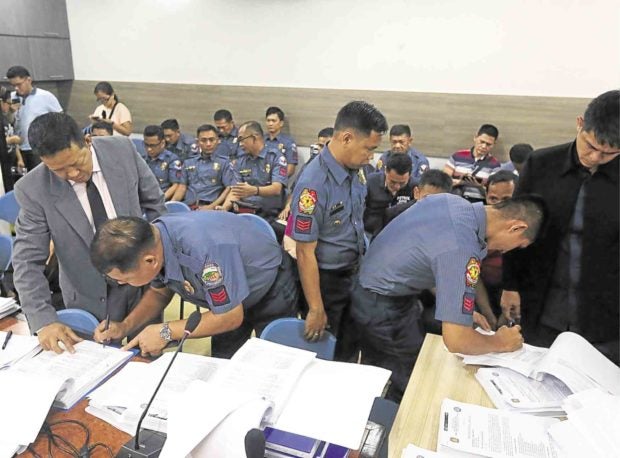 PRELIMINARY INVESTIGATION Pampanga policemen sign their affidavits on Monday before the opening of the Department of Justice’s preliminary investigation of rogue cops accused of pilfering and selling “shabu” (crystal meth) seized during an operation in Pampanga in 2013. —MARIANNE BERMUDEZ

MANILA, Philippines — Former Philippine National Police chief Oscar Albayalde now has to face criminal investigation along with 13 of his former officers in Pampanga province who have been accused of letting a drug lord escape in exchange for P55 million and selling a large amount of seized “shabu” (crystal meth) six years ago.

The PNP Criminal Investigation and Detection Group (CIDG) charged Albayalde and the 13 officers in an amended complaint filed with the Department of Justice (DOJ) on Monday.

Albayalde stepped down as PNP chief last week after being accused by witnesses in a Senate investigation of protecting the 13 officers from prosecution and of benefiting from the irregularity.

The CIDG deemed Albayalde, who was the Pampanga provincial police director at the time of the drug raid, criminally liable for trying to influence the internal “validation process” of the operation and failing to investigate his men when “irregularities” became known.

“Instead of conducting an investigation [of] his personnel, he rather recommended the personnel involved for the issuance of award,” the CIDG said in the amended complaint.

It said Albayalde called the former CIDG deputy director for operation, Chief Supt. Rudy Lacadin, “to influence [him] in the validation process” concerning the Nov. 29, 2013, police operation in Mexico, Pampanga.

Albayalde allegedly “failed to initiate an investigation [of] the incident when its irregularities started to unfold,” it said.

The CIDG also filed new charges of graft, qualified bribery and perjury against the 13 “ninja cops.”

“Ninja cops” is a police term for officers who pilfer and sell seized illegal drugs.

The CIDG had originally accused the 13 officers of misappropriating confiscated drugs, planting evidence and violating rules on the custody and disposition of seized drugs.

The DOJ had dismissed the complaint for insufficient evidence, but recently ordered a new investigation after the Senate blue ribbon committee inquiry into scams in New Bilibid Prison turned its focus on how Albayalde allegedly intervened for the 13 policemen.

According to the CIDG, the raiding team confiscated 200 kilos of shabu, P55 million cash and a sports utility vehicle.

The officers have since been demoted by one rank after an internal investigation.

Albayalde has denied wrongdoing and threatened to bring charges against the witnesses.

On Monday, he said he welcomed the DOJ investigation so he could be given “due process.”

Baguio City Mayor Benjamin Magalong, a former CIDG chief who investigated the Pampanga drug raid and one of the witnesses in the Senate inquiry, said “there’s more” to Albayalde’s role in the operation “than meets the eye.”

“He needs to be held accountable not only because he didn’t do anything but because of the youths who were victimized when 160 kilos of shabu were returned to the streets,” Magalong said.

“He failed to act and he continues to protect those involved in that [irregularity] so he should be charged,” he added.

Police Lt. Col. Joseph Orsos, lawyer for the CIDG, told reporters that Albayalde was included as respondent based on “old evidence and the Senate transcript,” referring to the 2013 complaint and the testimonies during the legislative inquiry.

“The totality of the evidence shows that he (Albayalde) is probably liable, just the probability,” Orsos said, adding that Albayalde’s call to the CIDG was “somehow [an] indication of liability” because “somehow he’s trying to persuade in behalf of the other respondents.”

Orsos, however, admitted having “no strong single evidence” against the former police chief, just “the circumstances that will show that he is probably liable [and] included of course are the admissions during the Senate investigation.”

Asked why the CIDG did not file the complaint with the Ombudsman, Orsos said filing a separate case would “take time” so the police would leave the decision up to the DOJ.

When reached for comment, Justice Secretary Menardo Guevarra said Albayalde’s inclusion in the complaint “is a reflection of their assessment that General Albayalde may be held criminally liable for the acts or omissions alleged in the complaint.”

“For its part, the DOJ will conduct a fair and thorough investigation of the old and new charges and will afford General Albayalde his right to due process,” he said.

“Let the law take its course,” presidential spokesperson Salvador Panelo said after news that Albayalde had been charged broke.

Sen. Richard Gordon, chair of the blue ribbon and justice committees that investigated the scandal, said the Senate would keep an eye on the PNP to see whether the irregularity would now stop.

Gordon commended President Duterte for condemning the irregularity last week, and noted that a revamp had taken place in the PNP.

“I can assure you the Senate is going to watch with eagle eyes and see whether this thing has stopped because we’re still getting information, some of whom had been included in the reshuffle,” Gordon said in a television interview.

He said the new CIDG chief, Brig. Gen. Joel Napoleon Coronel, should look into the possibility that policemen continued to be involved in the sale of confiscated drugs.

The DOJ, he said, should send a “strong message” to encourage other witnesses to come forward with information about the irregularity.

“If they see something is being done about it, many would come out and you’ll have a lot more information coming in,” Gordon said.

He said the Senate inquiry would continue even after the release of a draft partial report on the irregularity, especially if there was new evidence.

Gordon said he was seeking more information about Lee, and that immigration officials had told him that the alleged drug lord had returned to the Philippines using another passport.

He said he was also looking for the vehicles allegedly taken during the 2013 drug raid in Pampanga. —WITH REPORTS FROM LEILA B. SALAVERRIA, JULIE M. AURELIO AND VINCENT CABREZA