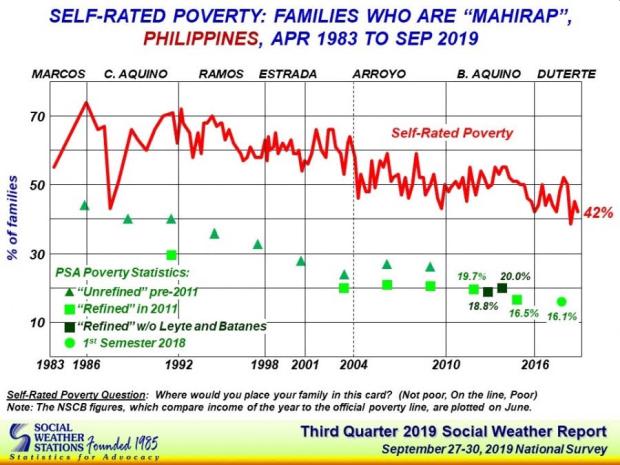 According to the survey results released on Monday, 42 percent, or some 10.3 million, Filipino families consider themselves poor as of September this year.

This is a three-point decrease from the 45 percent, or an estimated 11 million families, who considered themselves poor in June 2019, SWS noted.

The pollster, meanwhile, found that the national median self-rated poverty (SRP) threshold or “what the poorer half of the poor need for home expenses in order not to be poor” is at P10,000.

Meanwhile, the median SRP gap was “unchanged” at P5,000, which is half of the SRP threshold.

The median SRP gap is defined by SWS as “how much the poorer half of the poor lack in reaching their stated threshold in order not to consider themselves poor.”

The survey also found that 7.1 million families, or 29 percent, rated their food as poor. 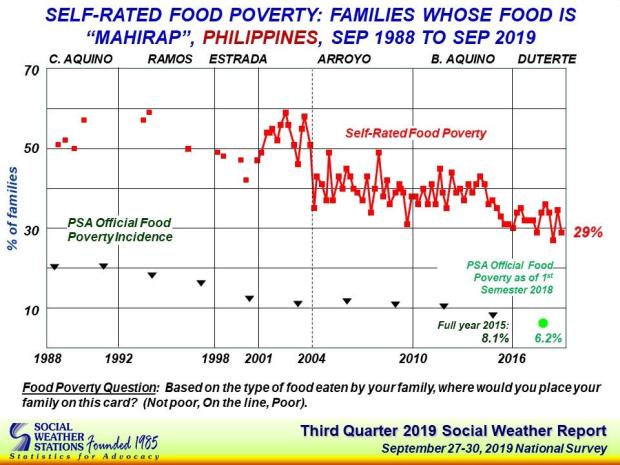 SWS said the national median self-rated food poverty (SRFP) threshold was down to P5,000 from the P6,000 in June this year.

The national media SRFP threshold refers to what the “poorer half of the poor need in order to not consider their food as poor.”

Meanwhile, the median SRFP Gap or “how much the poorer half of food-poor families lack in order not to consider their food as poor” is at P3,000 which is more than half of the median SRFP threshold, SWS said.

The SWS survey was conducted from September 27 to 30, 2019, using face-to-face interviews of 1,800 adults (18 years old and above) nationwide with 600 each in Balance Luzon and Mindanao, and 300 each in Metro Manila and the Visayas.