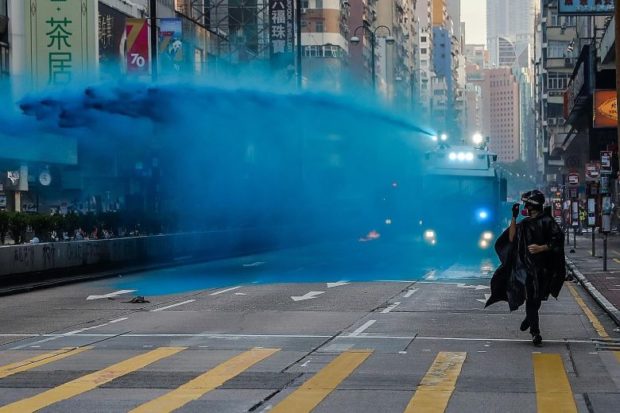 HONG KONG — An illegal protest in Hong Kong’s Tsim Sha Tsui district has descended into chaos, spreading across parts of the Kowloon peninsula with shops vandalized and torched, even as the city’s Chief Executive Carrie Lam pledged to find ways to ease public concerns about police actions.

Protesters and police fought pitched street battles late into the night, with the main battleground in Mong Kok, a densely populated shopping district. A number of passers-by and street vendors were caught in the crossfire, affected by tear gas fired by police.

In the late afternoon, demonstrators tossed multiple rounds of Molotov cocktails at Tsim Sha Tsui Police Station and the police responded with multiple volleys of tear gas from the upper floors of the building, while warning protesters over a loudspeaker to stop. Two hoses were constantly spraying water to douse the flames.

Petrol bombs were also tossed into several MTR stations and a Xiaomi outlet in Mong Kok was set ablaze. Many of the shops targeted – including Bank of China branches, a Best Mart 360 and a Beijing Tong Ren Tang medical shop – were Chinese-owned businesses or had links to the mainland.

By evening, about a dozen MTR stations along the protest route had closed.

The initial march, which began about 1:30 pm at a park in Tsim Sha Tsui, was banned by the police who were concerned about violence erupting just like in previous protests. But the ban failed to deter what organisers claimed were 315,000 protesters who showed up clad in black, some wearing masks of cartoon characters and political leaders, including Chinese President Xi Jinping. Some demonstrators turned up with their entire families in tow.

As the march ended near the West Kowloon terminus shortly before 2:30 pm, signs of trouble began to emerge in what has become a familiar pattern. Protesters were seen spraying over the MTR logo with black paint, setting up barricades and digging up bricks.

The protesters also unfurled banners reading “Free Hong Kong” and “HongKongers Resist”. On one wall, someone had scrawled: “Better Dead than Red.”

While many protesters were, as usual, waving American and British flags, a new standard made an appearance: the Catalonian flag.

“I saw in news reports that the Catalonians are fighting for the same things as us – democracy, freedom and justice – so we are friends,” said 25-year-old protester Kay, who was holding a printout of the flag. “I just want to show my support and solidarity.”

Meanwhile, Mrs Lam said she would look at other options to assuage public anger if the Independent Police Complaints Council (IPCC), which has been tasked to look into some incidents in the recent unrest, was unable to provide the public with a satisfactory answer to allegations of police brutality. “Up to now, these incidents are what the public is most concerned about,” she said in an interview with local broadcaster TVB.

“If the report of the independent IPCC, when it is delivered, still fails to quell the controversies with a lot of doubts in society, at that time I believe the Chief Executive and the government will definitely think of another way to make a sufficient response to the public.”

Security was tightened ahead of the anti-government march yesterday, with some public facilities shuttering as pro-democracy leaders called on citizens to join the protest, despite the risk of arrest.

At the city’s high-speed rail station in Kowloon, several areas were closed and only passengers with tickets were permitted entry. All food and beverage outlets were also closed.

In anticipation of chaos breaking out after the march, the city’s train operator shut down the Austin and Tsim Sha Tsui stations from midday yesterday.

Train stations have been a common target of protesters who believe the MTR Corporation is pro-China.

The unrest in Hong Kong is now approaching five months as protests pressing the government to give in to protesters’ demands have now evolved into calls for greater democracy.

Read Next
12 ‘fixers’ nabbed near LTO main office in QC
EDITORS' PICK
Common, mild ailments hit 3,773 Taal evacuees – DOH
Best Gift Ideas in the Philippines
Beyond water service: Maynilad builds massive infrastructure projects to clean up Metro Manila waterways
Outbreak from new virus rises to 440 in China, with 9 dead
DOTr-TWG: Motorbike taxi rider cap in NCR up to 15,000 per firm
Timeless Elegance in the Philippines’ Most Distinguished Home Kitchens
MOST READ
Chinese sex den used lighters to get clients
Villagers, cops given 48 hours to flee Taal Volcano danger zone
Manila roads to be closed on Jan. 24 for Chinese New Year
Teen gets 40 stitches after dog bites her face during photo shoot
Don't miss out on the latest news and information.