PNP top officials on probation for 3 months after major revamp 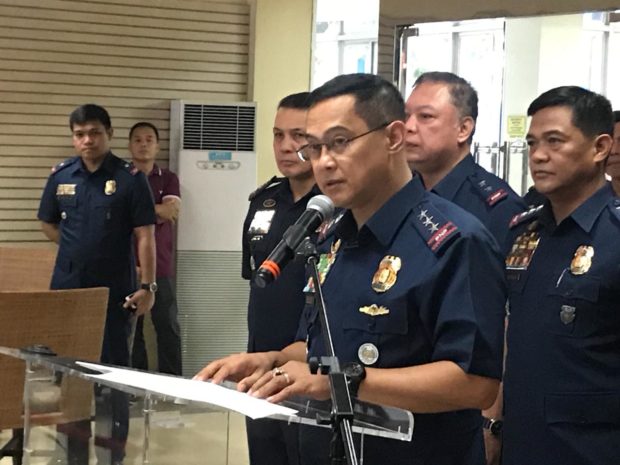 MANILA, Philippines – Lt. Gen. Archie Gamboa, officer-in-charge (OIC) of the Philippine National Police (PNP), announced on Monday that he has placed key officials of the police force in probation for three months “for them to show that they deserve the position.”

Gamboa said he had ordered the placement to probation status of not only police generals who were recently designated to new positions, but also to all members of the directorial staff, commanders of national support units, and regional directors.

He added he has also put promotions of police officials with the rank of Brigadier General and up on hold.

“Beginning today, all key positions are under probation for three months. And all promotions will be on hold. And I will make sure the ax will fall where it should if these leaders will not deliver results,” he said in a press briefing at Camp Crame.

When asked by reporters about the reason behind the major revamp at the PNP, which was announced over the weekend, Gamboa said these are “the same questions asked by people affected by the reshuffling.”

Gamboa, who became OIC of the PNP after erstwhile PNP chief Gen. Oscar Albayalde went on non-duty status, explained he had ordered the massive reshuffling in the organization upon the directive of President Rodrigo Duterte during a command conference on October 15, and to introduce “new leadership,” “fresh ideas,” and “new vigor.”

“Each one will strictly be held accountable for what his or her unit does or fails to do,” he said.

Gamboa said the police officials who were reassigned to new posts have respected his decision as OIC, despite some of them being his mistahs (classmates) at the Philippine Military Academy.

“Yun ang in-assure ng lahat na okay, nag-usap na tayo, ilabas niyo ‘yung mga saloobin niyo pero pagkatapos nito, tapos na ‘to (That’s what everyone assured, we already spoke, release your sentiments here but after this, this is finished) and ultimately we respect the decision of the OIC and we move forward,” he said, narrating a scenario during a command conference of top police officials at Camp Crame on Saturday when he announced the reshuffling.

He explained that as OIC, the National Police Commission has given him the power to designate or relieve senior officers from different PNP units. /je