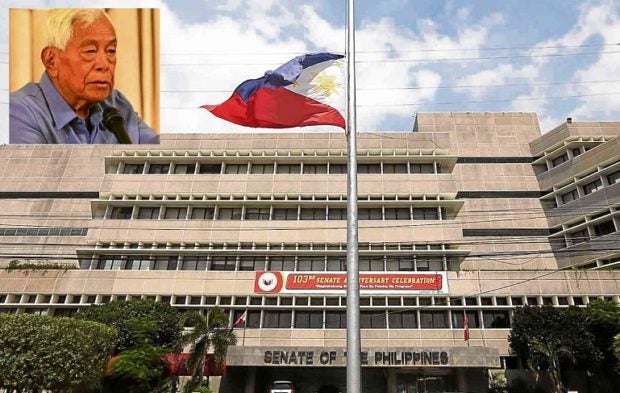 FAREWELL, SENATOR NENE The Philippine flag flies at half-staff at the Senate in honor of former Senate President Aquilino “Nene” Pimentel Jr. (inset), who died on Sunday morning after a battle with lymphoma. —MARIANNE BERMUDEZ

MANILA, Philippines — “An old man on the way out” was how Senate President Aquilino “Nene” Pimentel Jr. described himself in an interview on the homestretch of his third and last Senate term that ended in 2010.

Years later, the stalwart of PDP-Laban (Partido Demokratiko Pilipino-Lakas ng Bayan) was still acknowledged as a keen political observer, even expressing reservations about the version of federalism—his lifelong vision for the country—being pushed by President Duterte.

Pimentel also remained a dear adviser to friends and family in his twilight years, especially to son Aquilino “Koko” Pimentel III who followed in his footsteps and became Senate President in 2016.

The former Senate leader and Marcos-era freedom fighter succumbed to lymphoma at 5 a.m. on Sunday after a week of intensive-care confinement. He was 85.

Adventure of a career

Pimentel was the right fighter at a critical time. His storied political career was as much an adventure and had more than a touch of drama, because of his repeated persecution by the dictator Ferdinand Marcos.

His old friend and PDP-Laban cofounder, Sen. Benigno “Ninoy” Aquino Jr., once remarked — in an attempt to be prophetic but without foreseeing the presidential candidacy of his wife, Cory — that “Nene is lucky. He is destined to succeed Marcos.”

Winning a seat in the Constitutional Convention (Con-con) of 1971, Pimentel had a gutsy persona that already hinted at a political career that was anything but ordinary.

He had swagger but was warm, and had a ready handshake. He leaned forward as he listened to people, would put his arm over a shoulder or hold their hands. He was a genuine “koboy,” whose hoarse voice was part of his folksy charm.

Marcos’ declaration of martial law in 1972 was the first disruption in Pimentel’s career. But it was in this and other dark episodes that his light shone brightest.

As Pimentel was among the Con-con delegates who opposed the new Charter foisted by Marcos, the strongman put the brash young lawyer in jail.

Upon his release, Pimentel went on to defend the disempowered — peasants and the urban poor. He joined Mabini (Movement of Attorneys for Brotherhood, Integrity and Nationalism Inc.), a band of feisty human rights lawyers that included Rene Saguisag, Joker Arroyo, Jejomar Binay, Augusto Sanchez and Rene Sarmiento.

He also joined forces with Aquino, who was still held in prison by Marcos, and was among the candidates of the Laban broad alliance in the 1978 Interim Batasang Pambansa election, which first saw the eruption of a “noise barrage” protest in Manila’s streets after six years of martial law’s eerie silence.

The massive poll cheating prompted Pimentel and others in the opposition to lead more protests. He and others were detained at Camp Bicutan.

Pimentel’s next brush with the Marcos regime was the 1980 local elections, winning the mayoralty of Cagayan de Oro City with only P2,000 in campaign funds.

The Marcos-controlled Commission on Elections barred him from taking office on contrived charges, but supporters in Cagayan de Oro launched what was regarded in hindsight as another prelude to People Power, while fellow lawyers in the opposition defended his electoral case in Manila. Marcos was pressured to reinstall Pimentel as mayor.

Two years later, Pimentel was again arrested and detained for rebellion for allegedly handing over P100 to a New People’s Army commander. He was later arrested a fourth time for “engaging in ambuscades.”

By 1983, when Aquino’s assassination marked the beginning of the end of the Marcos regime, Pimentel was at the forefront of the anti-Marcos movement.

A story has it that he would have been Cory Aquino’s running mate in the 1986 snap presidential election had Manila Archbishop Cardinal Jaime Sin not lobbied for Salvador Laurel.

After the Edsa uprising, Cory, now president, appointed Pimentel as interior minister with the task of tearing down Marcos’ local network.

Pimentel was elected senator in 1987 and sponsored such landmark laws as the Local Government Code of 1991, the Act Creating the Autonomous Region in Muslim Mindanao, and the Cooperative Code.

Another highlight of Pimentel’s first term in the Senate was voting in 1991 with nine other senators otherwise allied with Cory against the extension of the US bases in Clark and Subic, which the Aquino government campaigned for.

They were joined by two opposition senators to make up the “Magnificent 12” in that historic vote.

Even with his national stature, Pimentel gave way to Jovito Salonga and ran as his vice-presidential candidate in 1992, but lost to Joseph Estrada.

He sought another term in the Senate, and was unprepared, despite his experience under Marcos, for what pundits regarded as the largest “dagdag-bawas” (vote-padding and shaving) fraud committed in the 1995 midterm elections.

In 1998, Pimentel won a fresh term in the Senate, and was voted the chamber’s leader two years later—the first Mindanaoan to occupy the Senate presidency. But by then, he would also have the unenviable role of presiding over the impeachment trial of Joseph Estrada.

He was among the senators who voted to disclose the sealed evidence that was supposed to prove plunder against Estrada. That point in the trial became the catalyst for Estrada’s ouster in 2001.

Friends would always remember Pimentel for his feistiness and candor.

In one of his last interviews as senator in 2010, Pimentel described his jailer and nemesis Juan Ponce Enrile as “authoritarian,” then Sen. Chiz Escudero as “very shifty” and said detained Sen. Antonio Trillanes IV “should have been out a long time ago.”

Said a longtime colleague of Pimentel in the Senate, Franklin Drilon, “Ka Nene fought for our country with honor and pride. His name will forever be remembered in the halls of Congress and by our grateful nation. Ka Nene is indeed a great loss to our nation. Rest now, Ka Nene.” —With a report from Marlon Ramos