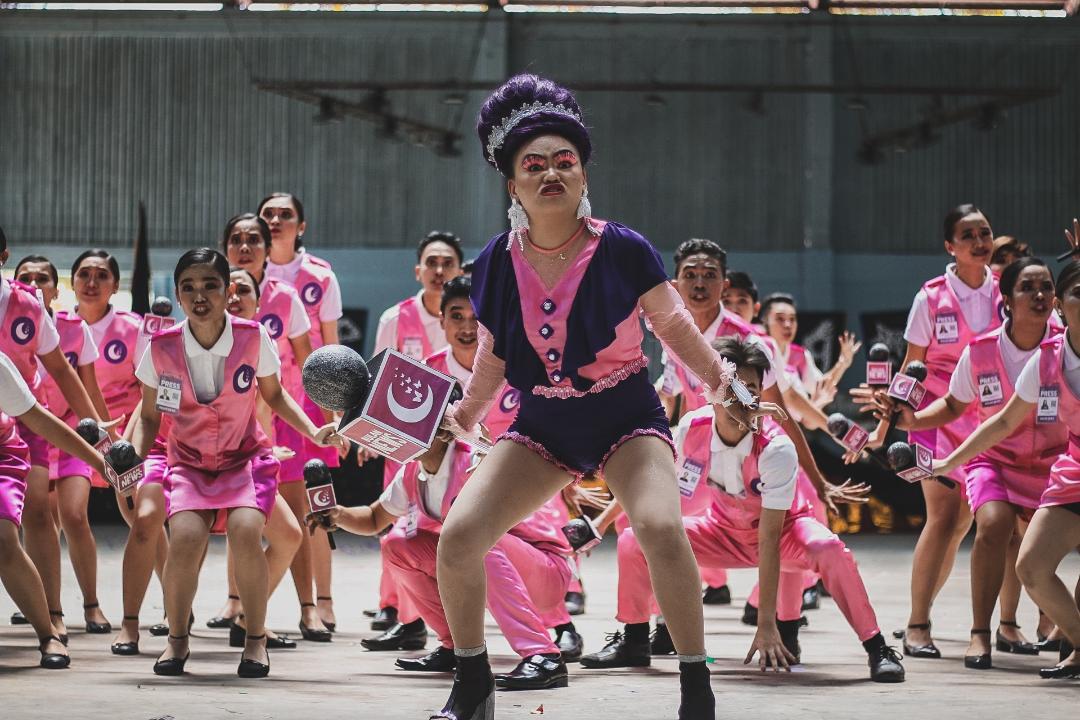 ILOILO CITY — A cheering group performance at the University of the Philippines Visayas (UPV) has gone viral drawing raves for its satirical attack on social and political issues but drawing the ire of supporters of President Duterte.

The 15-minute cheering performance of the Skimmers academic group on October 16 bagged the championship in this year’s UPV Pahampang, the annual sportsfest held at the UPV campus in Miag-ao town in Iloilo.

Composed of students enrolled in literature and in communication and media studies, the Skimmers won over 10 other academic groups for its performance portraying television reporters.

Rather than the usual pep squad contest characterized by acrobatic movements and dances, the cheering contest in UPV is a much-anticipated event among students and alumni for its tradition of satirical social commentary on university, community and national issues.

The no-holds barred chants are expected to be witty with biting humor, sarcasm and sexual innuendos.

In the Skimmers cheering performance, students who portrayed themselves as “paktrolers” of “Bulan News” donned reporter’s vests, held oversized microphones and reported on campus issues and national concerns.

Led by its cheerleader “Doris Biga-ornia,” they drew attention to the economic plight of Filipino media workers, “fake news,” censorship and attacks on journalists.

They also scored the lack of facilities in the campus amid a cut in the UP budget.

Some of their chants delved on sexual harassment against students and called for support for the Sexual Orientation and Gender Identity and Expression Equality and divorce bills.

The cheering team members also took shots at the Commission on Higher Education order removing Filipino and Panitikan as required subjects in college.

Among the most applauded yells were those against the proposal to deploy policemen and soldiers in campuses and red-tagging of students.

Posters accusing student groups in the campus of links to the underground rebel movement were displayed last month near the university after hundreds of students joined protest actions commemorating the declaration of martial law under the late dictator Ferdinand Marcos.

The cheering teams did not spare senators on controversial issues including Cynthia Villa on the Rice Tariffication law and Sen. Ronald  “Bato” dela Rosa on making the Reserve Officer Training Corps program mandatory.

They also took shots at the government’s policy in dealing with China and its encroachment of disputed territories.

“Welcome to the Philippines, province of China,” they yelled.

In an apparent play on the President’s propensity in his speeches to threaten the subject of his ire with killing, the cheering team chanted: “Let’s kill the President. Charot!”

But several supporters of the President have taken the chant literally accusing the students of grave threats and even inciting to sedition.

Some of them have posted messages in the social media accounts of UPV students especially those belonging to the Skimmers academic group calling them “communists” with some posts calling for the rape of students.

But those supporting the students decried what they said were “harassment” against the students.

#HandsOffSkimmers was among the trending hashtags in Twitter as UP students, alumni and others supporting the cheering group aired their support for the students. /je