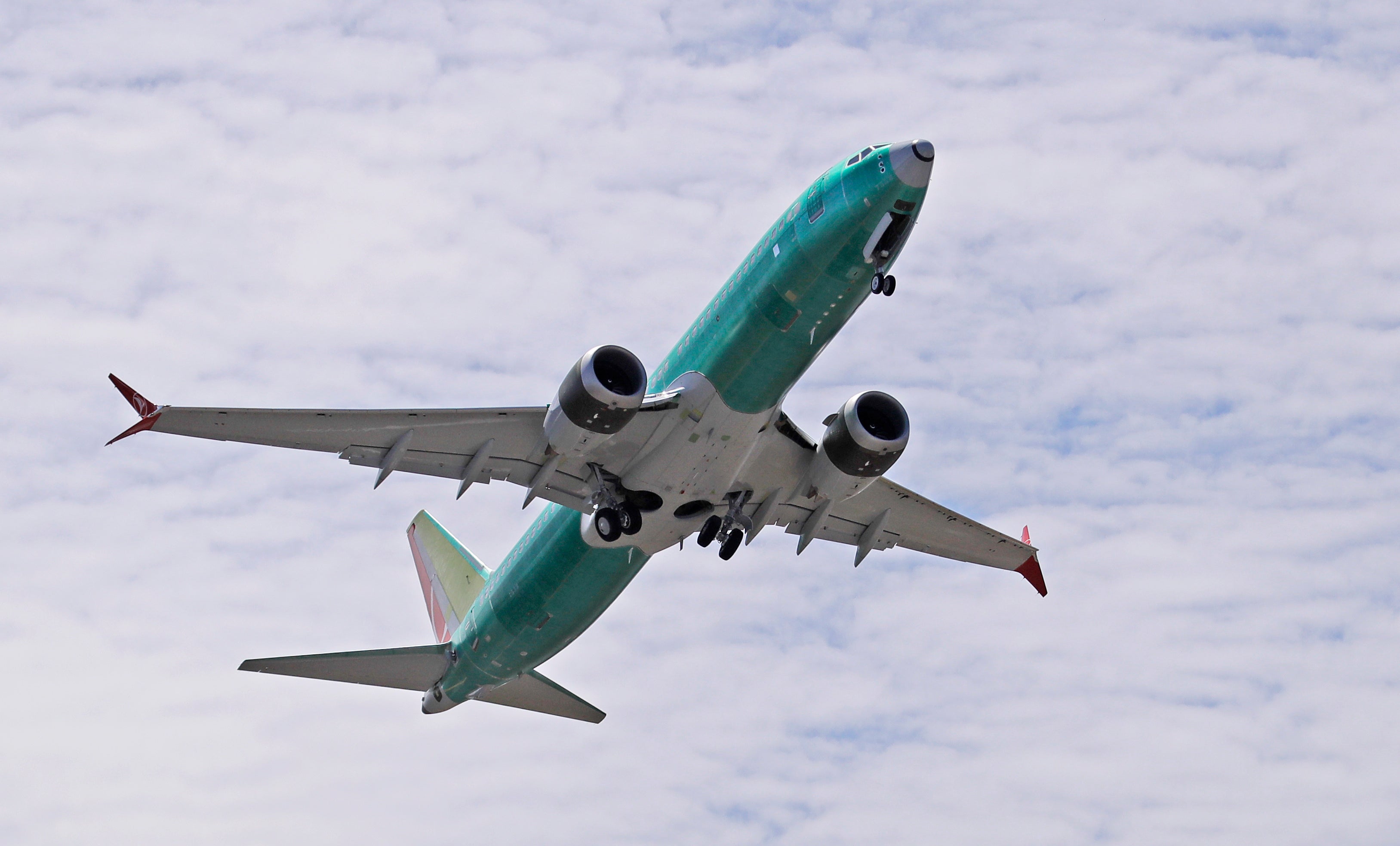 FILE – In this May 8, 2019, file photo, a Boeing 737 MAX 8 jetliner being built for Turkish Airlines takes off on a test flight in Renton, Wash. Boeing is selling its 737 Max planes again. The company announced at the Paris Air Show on Tuesday, June 18 that International Airlines Group signed a letter of intent for 200 Boeing 737 aircraft. (AP Photo/Ted S. Warren, File)

NEW YORK, United States — On September 12, Boeing started putting out 30-second videos in which employees tout its planes’ safety, hoping to reassure travelers about the 737 MAX that’s been grounded worldwide since two crashes that killed 346 people.

“Safety is at the core of our business. We have put hundreds of engineers to work to ensure that this airplane is 100 percent ready,” says Jennifer Henderson, chief test pilot for the 737, in one of the clips.

“When the 737 MAX returns to service I will absolutely put my family on this airplane,” she stressed.

But on a Facebook page for Boeing enthusiasts where the clip was posted, the response is negative.

“Well, I think she could not say it would be unsafe,” one member quipped, as Boeing faces the Herculean task of trying to regain the confidence of civil aviation authorities and the public, seven months after the crash of an Ethiopian Airlines MAX that killed 157 people.

That came after the downing of a Lion Air MAX in Indonesia in October 2018, killing 189, with the plane’s MCAS anti-stall system being blamed in both accidents.

It’s not known when the MAX will return to service. Boeing, which still has not submitted a modified version of the MCAS system to regulators, hopes it will be before the end of the year.

“The 737 Max is, for now, an ‘airplane non grata’ — a plane passengers do not want to fly,” said Henry Harteveldt, president of Atmosphere Research Group in San Francisco.

“Travelers aren’t merely scared of the 737 MAX, they’re terrified of it.”

Just 19 percent of business travelers and 14 percent of leisure travelers would willingly take the 737 MAX within six months of returning to the sky, according to an Atmosphere survey.

Nearly half of the 2,000 respondents said they would pay more to avoid the MAX.

Faced with this distrust, airlines are adapting.

“We will be transparent — and communicate in advance — with our customers who are booked to fly on a MAX aircraft, will rebook those who do not want to fly on a MAX at no charge, and for some time will not swap aircraft to a MAX if a change of aircraft is required,” said a spokesperson at United Airlines, which owns 14 MAX aircraft.

American Airlines, which has 24 MAX planes, has said its company brass and employees will be the first to fly on the aircraft once it’s cleared to return to the sky.

The MAX’s setbacks have cast a shadow over a century of history at Boeing, a highlight of which was the success of its 747 jumbo jet, nicknamed the “Queen of the skies.”

According to Harteveldt, half of business passengers and 55 percent of leisure passengers consider Boeing to be “irresponsible,” “arrogant” and “unsafe.”

“We know that trust has been damaged over the last few months and we own that and we are working hard to re-earn that trust going forward,” CEO Dennis Muilenburg said in August.

The trust may have been tested again on Friday, when it emerged that some potentially significant documents at Boeing were held back from investigators for months.

Boeing says it has conducted 1,447 flight test hours as of October 13 with the modified MCAS, and Muilenburg personally took part in two tests.

“Boeing has no choice but to get it right this time, however uncomfortable that may be for now,” said Tracy Stewart, an editor at airfarewatchdog.com.

If Boeing can take comfort in anything, it may be that most travelers do not look up which jet they will fly when booking tickets.

Most commercial passengers are “worried about getting an aisle seat, and hoping the overhead bin will still have space for a carry on,” said John Dekker of online travel agency Surf City Travel.

Some experts said one of the best ways for Boeing to regain credibility is to release a video explaining the changes to the 737 MAX to make it safer.

They must “make sure they have informed the consumer that it won’t happen again… PERIOD!” said Dekker.