Asylum-seeking Mexicans are more prominent at US border 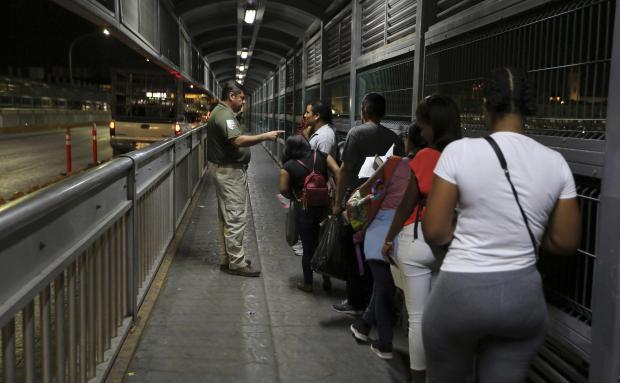 In this photo, taken Sept. 17, 2019, a Mexican immigration officer gives instructions to migrants who are applying for asylum in U.S. as they wait on International Bridge 1 as they prepare to leave Nuevo Laredo, Mexico, and enter Laredo, Texas. Mexicans are increasingly the face of asylum in the United States, replacing Central Americans who dominated last year’s caravan and a surge of families that brought border arrests to a 13-year high in May. (Photo by Fernando Llano / AP)

CIUDAD JUAREZ, Mexico — Lizbeth Garcia tended to her 3-year-old son outside a tent pitched on a sidewalk, their temporary home while they wait for their number to be called to claim asylum in the United States.

The 33-year-old fled Mexico’s western state of Michoacan a few weeks ago with her husband and five children — ages 3 to 12 — when her husband, a truck driver, couldn’t pay fees that criminal gangs demanded for each trailer load. The family decided it was time to go when gangs came to their house to collect.

“I’d like to say it’s unusual, but it’s very common,” Garcia said Thursday in Juarez, where asylum seekers gather to wait their turn to seek protection at a U.S. border crossing in El Paso, Texas.

Mexicans are increasingly the face of asylum in the United States, replacing Central Americans who dominated last year’s caravan and a surge of families that brought border arrests to a 13-year-high in May. Arrests have plummeted since May as new U.S. policies targeting asylum have taken hold, but Mexicans are exempt from the crackdown by virtue of geography.

A legal principle that prevents countries from sending refugees back to countries where they are likely to be persecuted has spared Mexicans from a policy that took effect in January to make asylum seekers wait in Mexico while their claims wind through U.S. immigration courts.

They are also exempt from a policy, introduced last month, to deny asylum to anyone who travels through another country to reach the U.S. border without applying there first.

Mexico resumed its position in August as the top-sending county of people who cross the border illegally or are stopped at official crossings, surpassing Honduras, followed by Guatemala and El Salvador. Mexicans accounted for nearly all illegal crossings until the last decade as more people from Central America’s “Northern Triangle” countries decided to escape violence and poverty.

Fewer Mexicans are crossing from the peaks reached in May, but the drop in Central Americans is much sharper, making Mexicans the biggest part of the mix, according to U.S. Customs and Border Protection figures. Mexicans arrested or stopped at the border fell 8% from May to August, but border crossers were down 80% from Guatemala, 63% from Honduras and 62% from El Salvador during the same period.

It is unclear precisely what is driving the change, perhaps some mix of U.S. policies and violence in Mexico. The Mexican government’s retreat from an attempted capture of a son of imprisoned drug lord Joaquin “El Chapo” Guzman on Thursday followed a ferocious shootout with cartel henchman that left at least eight people dead.

“Given the deterioration in the security situation in many parts of Mexico, with homicide levels that are exceeding even the record high numbers from 2018, it seems likely that more Mexicans are fleeing their hometowns out of fear and the growing sense that the Mexican government, at all levels, is either unable or unwilling to protect them,” said Maureen Meyer, director for Mexico and migrant rights at the Washington Office on Latin America, a human rights research group.

People traveling as families accounted for 23% of all Mexicans arrested or stopped at the border in August, a major shift from earlier immigration waves when nearly all Mexicans came as single men, according to CBP figures. Another big change: 36% of Mexicans presented themselves at official crossings — the U.S. government’s prescribed way to claim asylum — instead of earlier times when nearly all tried to cross illegally.

The U.S. government has limited detention space for families and, under a court settlement, must release families within 20 days. Asylum-seeking families have generally been released in the United States with an ankle monitor on the head of the household and a notice to appear in backlogged immigration courts, where cases can take years to resolve. That changed for everyone except Mexicans with the new U.S. limits on asylum and its policy to make asylum seekers wait in Mexico, known officially as “Migrant Protection Protocols” and colloquially as “Remain in Mexico.”

“It’s a pretty drastic change from what we have been observing in the past couple of years,” said Guadalupe Correa-Cabrera, an associate professor at the Schar School of Policy and Government at George Mason University. “Now the word has been spread out, and the Mexicans are the only ones that can apply for asylum right now.”

In Phoenix, only about 40 to 50 people are being released in the U.S. each day, roughly half from the height of arrivals. One of the places families get released to is The Welcome Center, an abandoned elementary school-turned-shelter run by the International Rescue Committee that can host about 70 people now but is increasing its capacity by nearly quadruple.

Since opening July 27, the Welcome Center has seen 567 people come through, IRC spokesman Stanford Prescott said. Nearly 64% were Mexican, and nearly 7 percent were Guatemalans. In March and June, before the Welcome Center opened but when IRC and others were already assisting migrant families, Guatemalans were about 76% of families served.

At a family detention center in Dilley, Texas, roughly 30% of families that the Dilley Pro Bono Project is serving are Mexican, compared with only 1% prior to this month.

Mexicans, like all nationalities, still must wait in Mexico, usually for months, to make initial claims under ticketing systems that were created last year because the U.S. processes a limited number of claims each day.

In Juarez, about 100 families make up the camp of tents that lines both sides of a side street leading to the city’s main promenade and Paso Del Norte border crossing, where asylum claims are processed. Some at the camp said they were coming because of a lack of jobs in southern Mexico.

A man who did not give his name said he left Michoacán because a gang said it would force his 18-year-old son to join. He and others living in a tent camp said there were two shootings near the camp, one Wednesday and one on Tuesday. The first shooting prompted him to get a hotel room for his family, though he left his tent in place on the sidewalk.