Seoul police up security after rally at US envoy residence 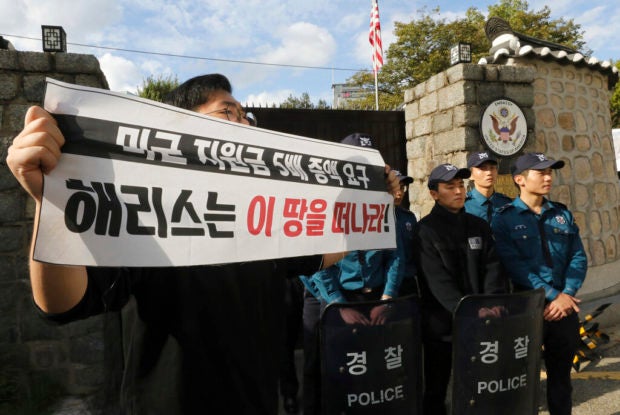 In this Friday, Oct. 18, 2019, photo, a college student holds a banner in front of the U.S. ambassador’s residence in Seoul, South Korea. South Korean police said Saturday, Oct. 19, they beefed up security at the U.S. ambassador’s residence in Seoul after a group of anti-American students used ladders to break into the compound. The sign reads ” “Harris, leave this land!” (Chun Jin-hwan/Newsis via AP)

SEOUL, South Korea — South Korean police said Saturday they beefed up security at the U.S. ambassador’s residence in Seoul after a group of anti-American students used ladders to break into the compound.

They were protesting demands by the Trump administration that South Korea pay more to help cover the costs of keeping U.S. troops in the country.

Officials from three Seoul police stations didn’t immediately say whether they will seek to formally arrest any of the 19 university students who were detained Friday afternoon at the residence of Ambassador Harry Harris.

The Seoul Metropolitan Police agency said Saturday the number of officers guarding the residence was more than tripled to 110.

The demonstrators, who broadcast parts of their protest on Facebook, used two steel ladders to climb over the compound’s wall. They shouted anti-U.S. slogans and held up signs that read “The United States has called for a five-fold increase in defense costs!” and “Harris, leave this land!” before police officers dragged them out.

At the time of the protest, Harris was at Seoul’s presidential Blue House attending a reception for foreign ambassadors hosted by President Moon Jae-in.

Harris tweeted about the incident on Saturday, saying, “Big shout out to Embassy guards & Seoul Metro Police Agency for responding to protesters who breached perimeter around my residence. 2nd incident in 13 months in Heart of Seoul. This time they tried to forcibly enter my home itself. 19 arrested. Cats are OK. Thanks @polinlove!,” referring to the Twitter account of South Korea’s National Police Agency.

South Korean police in September last year detained a Chinese woman who had trespassed into the residence, but said she wasn’t making a political statement.

About a dozen leftist students rallied in front of Seoul’s Namdaemun district police station on Saturday calling for the immediate release of the “righteous” protesters.

“You may have the support of foreign powers, capitalists, police and the military, but we have the united voice of like-minded colleagues bound by loyalty!” shouted one of the students.

Another student said South Koreans would see the United States as “nothing but an invader” if it continues to “disrespect” the country with excessive demands on defense costs.

The U.S. State Department has expressed “strong concern” over the illegal entry and urged South Korea to strengthen its efforts to protect all diplomatic missions.

South Korea’s Foreign Ministry criticized the protest, saying in a statement that “any attack or harm inflicted on foreign diplomatic missions cannot be justified under any circumstances.” It said the  government will take “every appropriate measure” to protect the facilities.

In a country deeply divided along political, ideological and generational lines, the United States is a source of anger for some leftist South Koreans.

Washington backed the South during the 1950-53 Korean War against the North and still stations about 28,500 troops here, but some anti-U.S. activists view the U.S. military presence as a major obstacle to their goal of an eventual reunification of the rival Koreas.

There was a major security scare in 2015, when a leftist activist slashed the face and arm of then-U.S. Ambassador Mark Lippert on a street in downtown Seoul to protest the annual U.S.-South Korea military drills. Lippert recovered from the injuries.

Friday’s protest came as Washington and Seoul prepare to begin negotiations over sharing the costs for the U.S. military presence. The countries struck a one-year deal in February where South Korea agreed to contribute about 1.04 trillion won ($880 million) for 2019, which represented an 8.2% increase from last year.

Seoul’s Foreign Ministry said Friday that the countries are scheduled to talk in Hawaii on Oct. 23-24 to negotiate a new deal and that Seoul is seeking a “reasonable and fair share of costs.” /jpv