Owl vs. owl: Should humans intervene to save a species?

CORVALLIS, Oregon — As he stood amid the thick old-growth forests in the coastal range of Oregon, Dave Wiens was nervous. Before he trained to shoot his first barred owl, he had never fired a gun.

He eyed the big female owl, her feathers streaked brown and white, perched on a branch at just the right distance. Then he squeezed the trigger and the owl fell to the forest floor, its carcass adding to a running tally of more than 2,400 barred owls killed so far in a controversial experiment by the U.S. government to test whether the northern spotted owl’s rapid decline in the Pacific Northwest can be stopped by killing its aggressive East Coast cousin.

Wiens is the son of a well-known ornithologist and grew up fascinated by birds, and his graduate research in owl interactions helped lay the groundwork for this tense moment.

“It’s a little distasteful, I think, to go out killing owls to save another owl species,” said Wiens, a biologist who still views each shooting as “gut-wrenching” as the first. “Nonetheless, I also feel like from a conservation standpoint, our back was up against the wall. We knew that barred owls were outcompeting spotted owls and their populations were going haywire.”

The federal government has been trying for decades to save the northern spotted owl, a native bird that sparked an intense battle over logging across Washington, Oregon and California decades ago.

After the owl was listed as threatened under the Endangered Species Act in 1990, earning it a cover on Time Magazine, federal officials halted logging on millions of acres of old-growth forests on federal lands to protect the bird’s habitat. But the birds’ population continued to decline.

Meanwhile, researchers, including Wiens, began documenting another threat — larger, more aggressive barred owls competing with spotted owls for food and space and displacing them in some areas.

In almost all ways, the barred owl is the spotted owl’s worst enemy: They reproduce more often, have more babies per year and eat the same prey, like squirrels and wood rats. And they now outnumber spotted owls in many areas of the native bird’s historic range.

So in a last-ditch effort to see whether they can save spotted owls, federal officials are resorting to killing hundreds of federally protected barred owls. 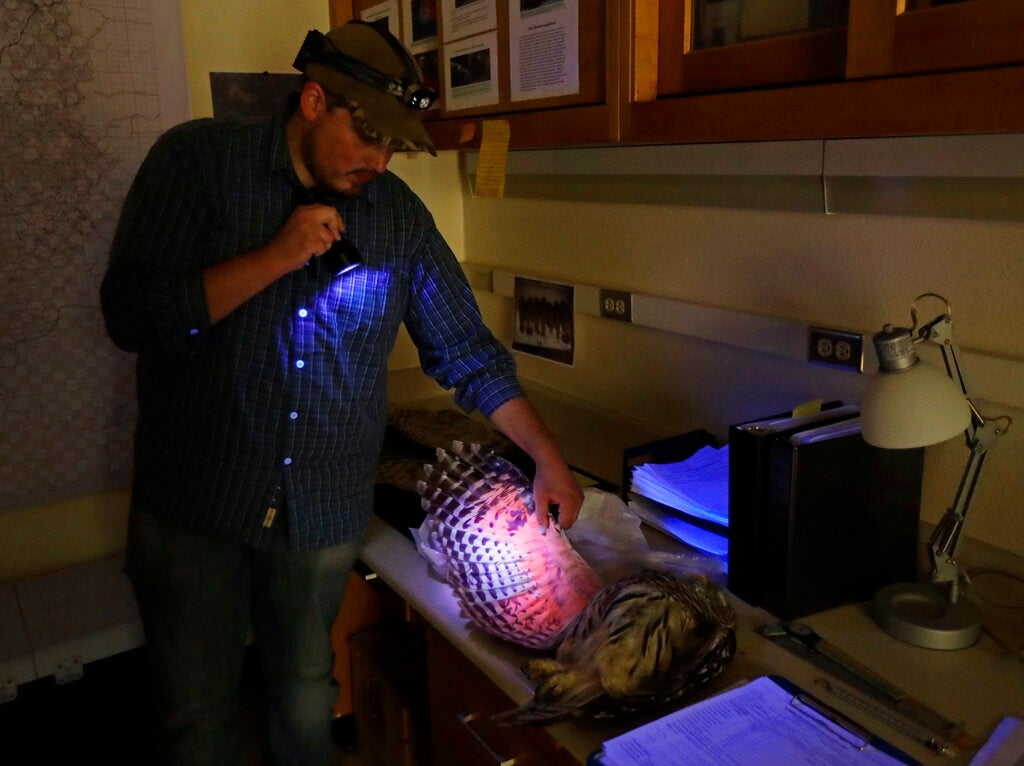 Jordan Hazan uses an ultraviolet light to examine a male barred owl he shot earlier in the night. (AP)

The U.S. Fish and Wildlife Service experiment, which began in 2015, has raised thorny questions: To what extent can we reverse declines that have unfolded over decades, often due partially to actions by humans? And as climate change continues to shake up the landscape, displacing species and altering how and where plants and animals live and thrive, how should we intervene?

The experimental killing of barred owls raised such moral dilemmas when it first was proposed in 2012 that the Fish and Wildlife Service took the unusual step of hiring an ethicist to help work through whether it was acceptable and could be done humanely.

Just as with other conservation measures that involve killing one creature to save another, the program also prompted litigation and debate.

Federal and state officials, for example, have broken the necks of thousands of cowbirds to save the warbler, a songbird once on the brink of extinction. To preserve salmon runs in the Pacific Northwest and perch and other fish in the Midwest, federal and state agencies kill thousands of large seabirds called double-crested cormorants. And last year, Congress passed a law making it easier for Oregon, Washington, Idaho and American Indian tribes to kill sea lions that gobble imperiled salmon runs in the Columbia River.

The owl experiment is unusual because it involves killing one species of owl to save another owl species — and it may well be the largest killing program involving raptors.

In four small study areas in Washington, Oregon and Northern California, Wiens and his trained team have been picking off invasive barred owls with 12-gauge shotguns to see whether the native birds return to their nesting habitat once their competitors are gone. Small efforts to remove barred owls in British Columbia and northern California already showed promising results.

The Fish and Wildlife Service has a permit to kill up to 3,600 owls and, if the $5 million program works, could decide to expand its efforts.

Wiens, who works for the U.S. Geological Survey, now views his gun as “a research tool” in humankind’s attempts to maintain biodiversity and rebalance the forest ecosystem. Because the barred owl has few predators in Northwest forests, he sees his team’s role as apex predator, acting as a cap on a population that doesn’t have one.

“Humans, by stepping in and taking that role in nature, we may be able to achieve more biodiversity in the environment, rather than just having barred owls take over and wipe out all the prey species,” he said.

Marc Bekoff, professor emeritus of ecology and evolutionary biology at the University of Colorado, Boulder, finds the practice abhorrent and said humans should find another way to help owls.

“There’s no way to couch it as a good thing if you’re killing one species to save another,” Bekoff said. 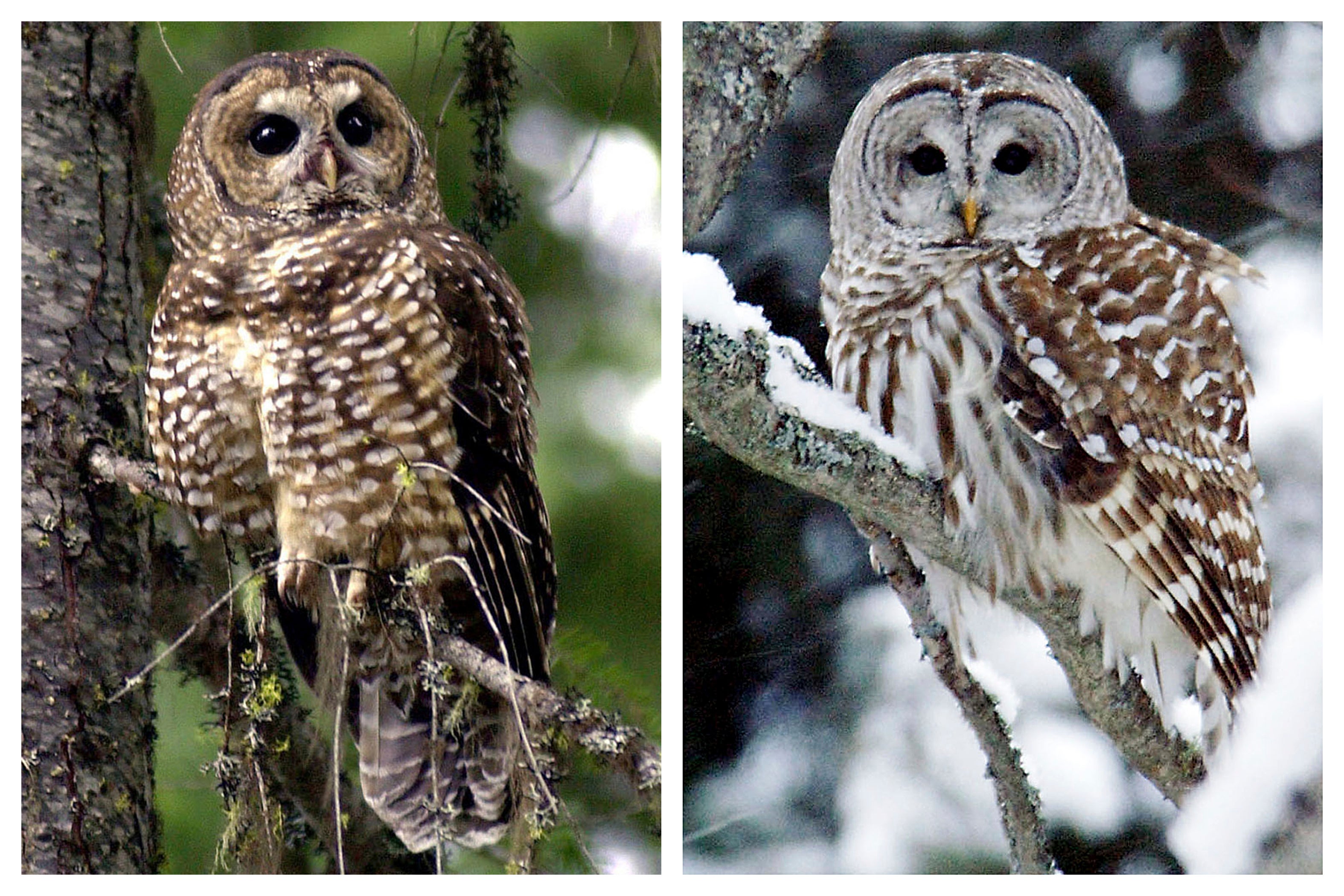 A northern spotted owl, left, in the Deschutes National Forest near Camp Sherman, Oregon and a barred owl in East Burke, Vermont. (AP)

And Michael Harris, who directs the wildlife law program for Friends of Animals, thinks the government should focus on what humans are doing to the environment and protect habitats rather than scapegoating barred owls.

“Things were put into motion a century ago. We really have to let these things work themselves out,” said Harris, whose group unsuccessfully sued to stop the killing and is now contesting an Endangered Species Act provision called an “incidental take” permit that exempts landowners who kill spotted owls during activities considered lawful, such as logging.

“It’s going to be very common with climate change,” Harris said. “What are we going to do — pick and choose the winners?”

Some see a responsibility to intervene, however, noting that humans are partly to blame for the underlying conditions with activities like logging, which helped lead to the spotted owl’s decline. And others just see a no-win situation.

“A decision not to kill the barred owl is a decision to let the spotted owl go extinct,” said Bob Sallinger, conservation director with the Audubon Society of Portland. “That’s what we have to wrestle with.”

Barred owls are native to eastern North America but began moving West at the turn of the 20th century. Scientists believe they migrated to western Canada across the Great Plains in the early 1900s, using forests that popped up as people learned to manage wildfires and planted trees around farms. They arrived in Washington in 1973 and then moved south into Oregon and California.

If the experimental removal of barred owls improves the spotted owl populations, the U.S. Fish and Wildlife may consider killing more owls as part of a larger, long-term management strategy. Enough success has been noted that the experiment already has been extended to August 2021.

“What we’re trying to do is find a way to manage barred owls — not to get rid of them completely — … so that spotted owls can still survive on the landscape while we look for opportunities to help the spotted owl recover,” said Robin Bown, who leads the agency’s owl experiment.

At the study site, Washington’s Central Cascades, only a few pairs of spotted owls remain and Wiens questions whether they can be saved there. But in Oregon and Northern California, they’re at least more robust, while still dwindling. 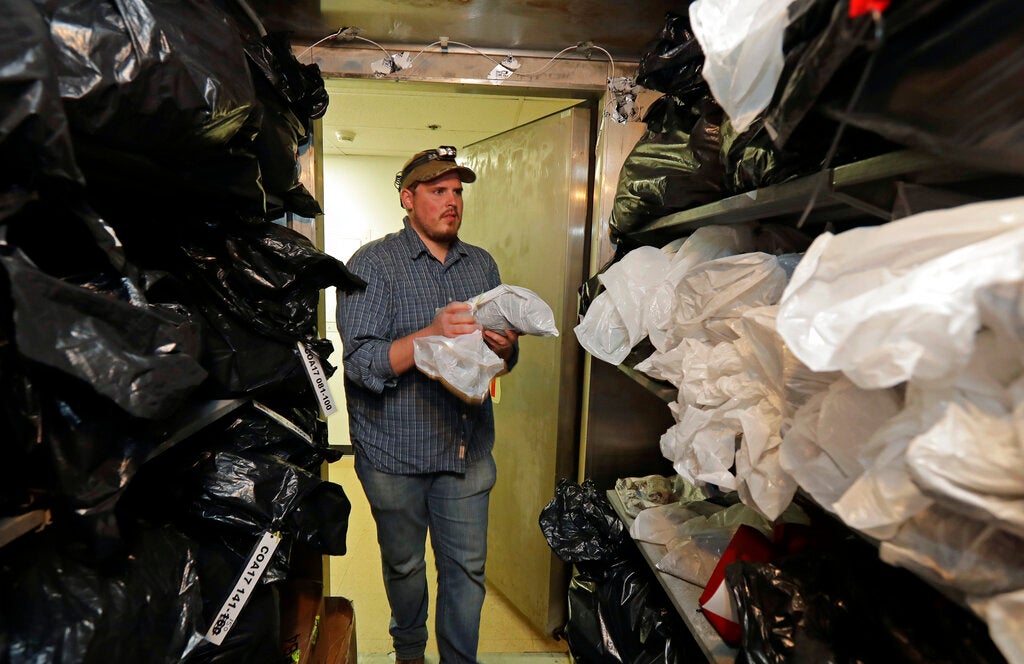 Jordan Hazan places a male barred owl he shot earlier in the night into a storage freezer in a lab.  (AP)

“We’re seeing a pattern with removals that the spotted owls that were there when we began are still there, yet the area where we’re not doing removals, they’re vanishing very quickly,” Wiens said. “But we’re not seeing new spotted owls move into these areas. New owls moving in is really the key sign of success.”

“I certainly don’t see northern spotted owls going extinct completely,” he said, adding that “extinction in this case will be much longer process and from what we’ve seen from doing these removal experiments, we may be able to slow some of those declines.”

Wiens has established a routine: It is pitch black when he parks his truck on an isolated road west of the central Oregon town of Corvallis, the town where he grew up. The forest reverberates as rain pelts towering stands of Douglas firs and cedars.

Wiens is 6 feet, 6 inches tall, but the trees dwarfs him as he approaches a clearing, the ground squeezing like a sponge at his every step. He sets a digital bird caller on the ground, steps back and waits as the first of several vocalizations penetrates the night, sounding a lot like: “Who? Who? Who cooks for you?”

Barred owls can’t stand intruders in their territory so they will swoop in to chase another owl out. Sometimes, they attack.

Wiens ramps up the pre-recorded calls until he hits one that sounds a lot like screeching monkeys. Somewhere in the darkness comes the muffled call of a male owl. “You hear that?” he says, his headlamp scanning high branches. “He’s way up there.” He plays a few more calls, but the male bird never shows.

Just after midnight, after spending several hours in the woods, Hazan carries a dead male owl in a white plastic bag into the lab in Corvallis. Inside the tight space, he weighs it, lays it on the counter and spreads the wings to measure its wingspan, revealing streaks of white and dark brown feathers on the bird’s chest.

The owl appears intact, an effort taken so specimens can be shipped out for research at museums and universities across the country. Several dozen had been shipped earlier that day to the Field Museum of Natural History in Chicago.

“They’re beautiful birds. It’s a little sad to have to kill them,” said Hazan, a wildlife technician who took the job in 2015 after spending two years surveying for increasingly scarce spotted owls.

His hands still shake every time he pulls the trigger.

“You’re taught all of your life that owls and raptors are to be protected,” he said. “People ask me how it is killing the owls. As a hunter, it’s fun going out and bagging your ducks and geese. With the owls, you don’t get any kind of pleasure out of it. It’s just something you have to do.” 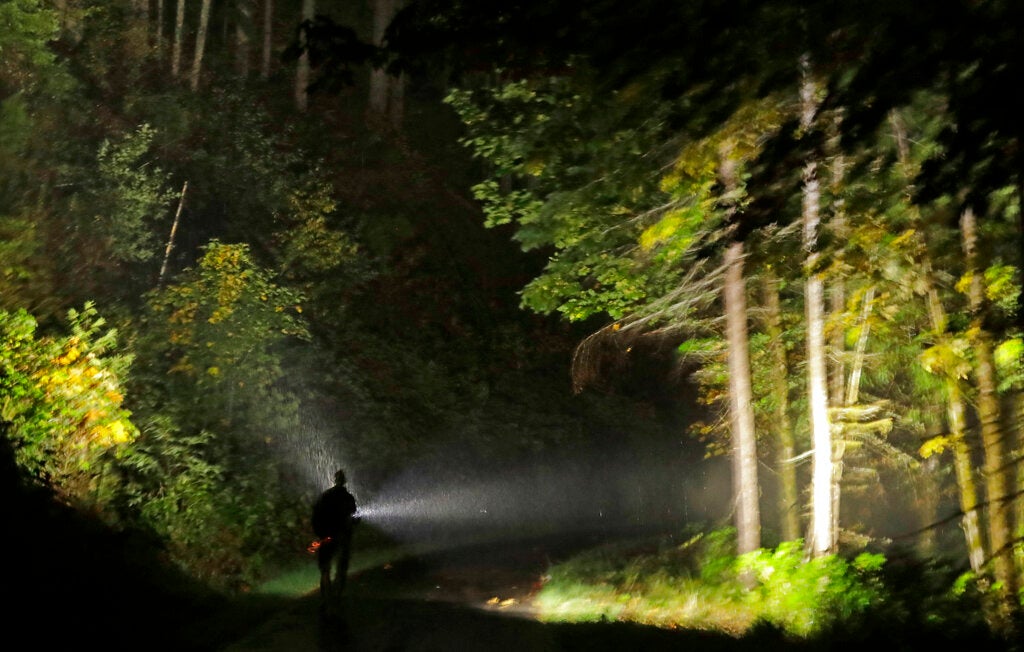 Dave Wiens, a biologist who works for the U.S. Geological Survey, walks through a forest near Corvallis, Oregon, carrying a digital bird calling device intended to attract barred owls to be culled. (AP)