‘Only God is with us’: A Syrian family feels betrayed by US 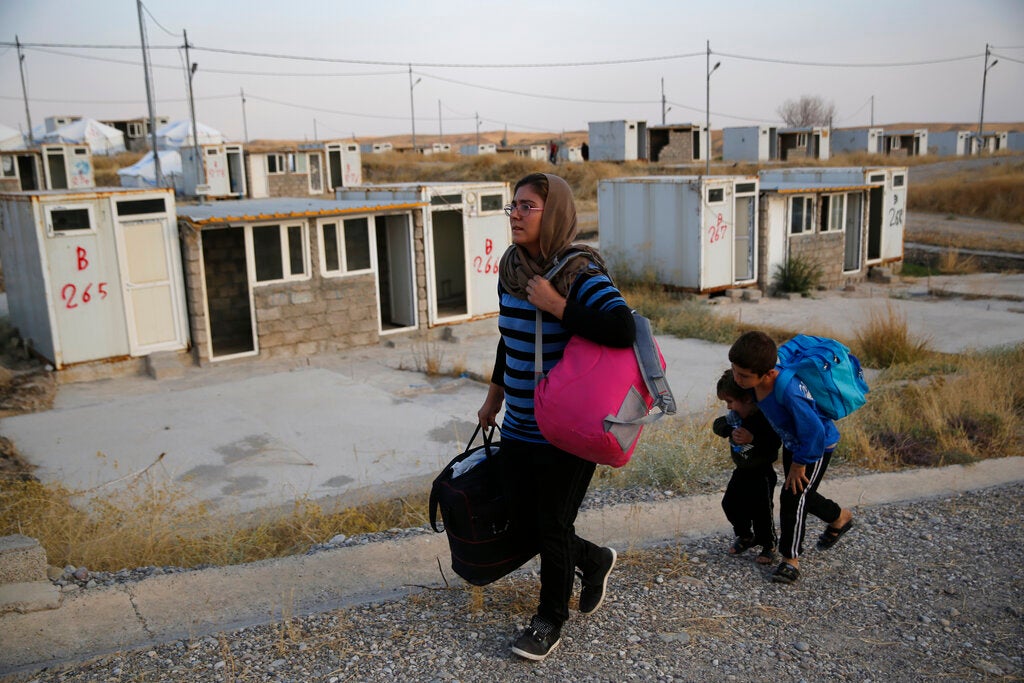 Salwa Hanna with her children, who are newly displaced by the Turkish military operation in northeastern Syria, carry their belongings after they arrive at the Bardarash refugee camp, north of Mosul, Iraq. (AP)

BARDARASH, Iraq  — For months, every time Turkey threatened to invade northern Syria, Salwa Hanna told her husband they should take their children and flee from the border town of Kobani. And every time, he told her not to worry, because the Americans were there.

Now the Christian family is among an estimated 160,000 Syrians who have fled Turkey’s offensive, which began last week after President Donald Trump announced he would move U.S. forces out of the way, abandoning their Kurdish allies. The invasion transformed one of the safest parts of Syria into a war zone, leaving displaced residents with a deep sense of betrayal.

Hanna and her husband arrived Thursday at a newly reopened camp in Iraq with their children and two small bags of clothes. They said they borrowed $200 to pay a smuggler to lead them across the border and have nothing left. They were shown to an empty tent with a bare concrete floor.

“I left my home, and I had just started a new home, and I left it all behind,” Hanna said. “There are no emotions anymore. We live as if we are dead.”

They are originally from Afrin, a Kurdish enclave in northwestern Syria that fell to Turkish troops and allied Syrian fighters in early 2018. There were no Americans in Afrin, and after the Kurds retreated there was no one to prevent the Syrian fighters — a motley crew of former rebels, Islamists, guns for hire and outright bandits — from looting and pillaging.

“They stole cars, they stole whatever they wanted. They even stole sandals,” Hanna’s husband, Abdulrahman Ali, said as he waved a flip-flop in the air. “They stole everything. All in the name of revolution or whatever.”

So the couple fled with their 10-year-old and their two-year-old, who suffers from asthma. “When they attacked Afrin it was winter, there were no doctors. I thought my son was going to die in front of me,” Hanna said.

The harrowing journey brought them to Kobani.

A U.S.-led international coalition had partnered with Syrian Kurdish fighters to defeat the Islamic State group, a campaign that began in Kobani after the Kurds were nearly annihilated there in 2014. Northeastern Syria, where armored vehicles mounted with American flags could be seen patrolling on the outskirts of some towns, was a rare refuge from the civil war. Hanna and her husband found work and started setting up a new home.

But a shadow clouded their newfound sense of security.

Turkey views the Kurdish fighters in Afrin and northeastern Syria as terrorists because of their links to the Kurdistan Workers’ Party, or PKK, which has waged a bloody insurgency inside Turkey since the 1980s. After Afrin, Turkish President Recep Tayyip Erdogan repeatedly threatened to expand the offensive into eastern Syria, vowing to carve out a “safe zone” extending 30 kilometers (20 miles) deep along the border.

For months, the U.S. worked to hold it off, agreeing to joint patrols and other measures aimed at easing tensions between NATO ally Turkey and America’s Kurdish partners. The presence of small numbers of American troops in places like Kobani served as a trip-wire to deter an invasion. Then, earlier this month, after a phone call with Erdogan, Trump announced that U.S. forces would pull back. The operation began on Oct. 9.

“For a whole year the Turks threatened us,” Hanna said. “I kept saying we should escape, because with the Turks there is no security. But my husband always said there are Americans, Britain, France, and they won’t abandon us.”

And then, just like that, the Americans left, and her family’s fearful flight resumed.

The Trump administration has defended its decision against withering criticism, even from fellow Republicans, saying it was opposed to the invasion but powerless to stop it. After a senior U.S. delegation negotiated a halt to the offensive that locks in Turkey’s gains while largely removing the threat of sanctions, Trump called it a “great day for civilization.”

But nothing in the agreement will allow the family to return to either of their homes. Abandoned by America, they are trusting in an even higher and more inscrutable power.

“The foreigners are not with us, neither the Americans nor the French nor anyone else,” Ali said. “Only God is with us.”