MANILA, Philippines — Police Gen. Oscar Albayalde, who stepped down as Philippine National Police chief early this week, and 13 of his subordinates should face life imprisonment for the alleged recycling of some 162 kilograms of “shabu” (crystal meth) seized in a purported drug sting in Pampanga six years ago, according to recommendations by a Senate inquiry that Sen. Richard Gordon cited to reporters on Friday.

Gordon issued the remarks as he made public a preliminary joint report by the Senate blue ribbon and justice committees on the so-called ninja cops racket, following Albayalde’s announcement to go on leave on Monday amid accusations that he protected the policemen involved in the 2013 operation.

“Ninja cops” is a police term for law enforcers who sell or profit from confiscated narcotics.

President Rodrigo Duterte, speaking at last on the controversy, reprimanded the PNP at a command conference with the Armed Forces of the Philippines on Tuesday. While addressing businessmen on Friday, he said: “Those in drugs, holdup, these policemen. Son of a bitch, they will all die.”

“Don’t give those ninja cops, you are gangsters, you fools,” Mr. Duterte said.

Gordon, who heads both the blue ribbon and justice committees, said Albayalde was “the biggest fish ever” in describing the police official’s role in the ninja cops racket.

“When you misappropriate the drugs [you confiscated] and you sell it, that’s life imprisonment. When you failed to account confiscated drugs, that’s punished under this law,” the senator said.

He cited Section 27 of Republic Act No. 9165, or the Comprehensive Dangerous Drugs Act of 2002, which imposes life term on a government official who “misappropriates, misapplies or fails to account for confiscated, seized or surrendered dangerous drugs.” 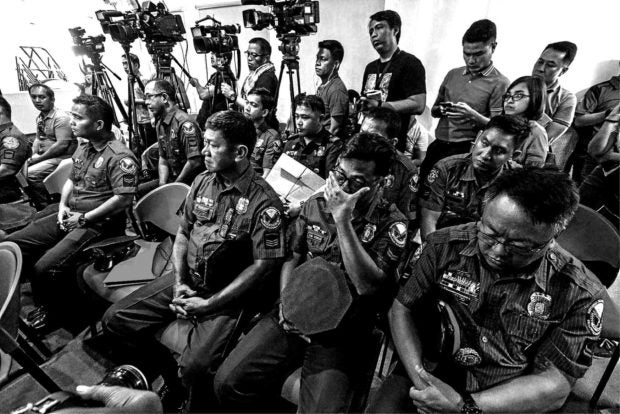 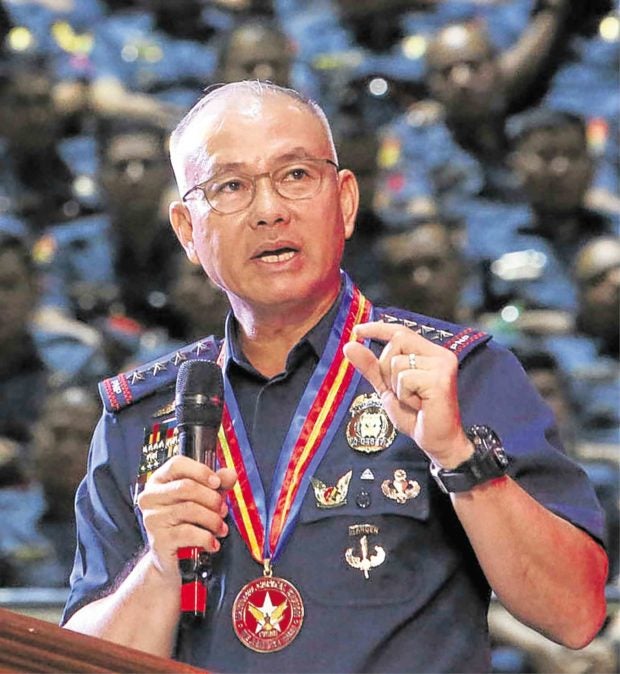 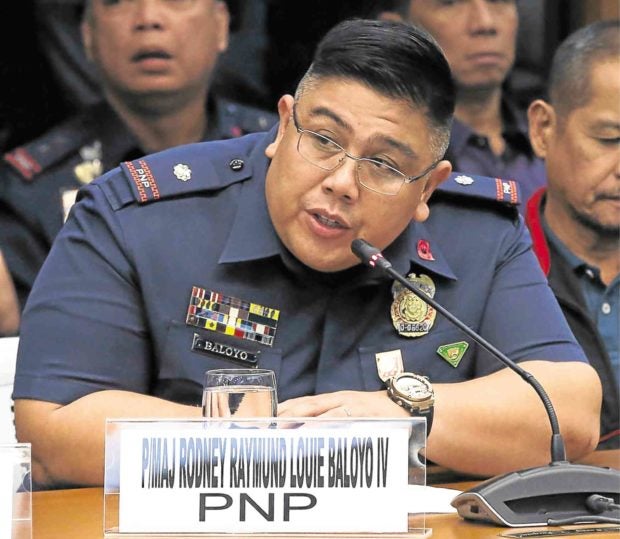 TOP-TO-BOTTOM TROUBLE Twelve of the 13 alleged “ninja cops”—or police officers who pilfered and resold confiscated illegal drugs—appear on Wednesday at the Department of Justice (upper photo) as it reopens the investigation into their controversial 2013 drug bust in Pampanga. A Senate inquiry on police corruption, which put that case under fresh scrutiny, has left a blot on the careers of Philippine National Police chief Gen. Oscar Albayalde, who was forced to step down on Monday, and Police Maj. Rodney Baloyo, who has been in detention since Oct. 3 after lawmakers cited him for contempt. —EARVIN PERIAS/LYN RILLON/MARIANNE BERMUDEZ

‘The drug war is injured’

Asked if Albayalde should be meted out the penalty of life imprisonment, Gordon replied: “Yes, for misappropriation of [seized illegal] drugs [and] for not reporting the [recovered illegal] drugs.”

Asked if he believed Albayalde had financially benefited from the drug haul, the senator said: “There’s no evidence to that effect right now … You don’t have to profit from it. It’s hard to prove that.”

Otherwise, the former PNP chief is criminally and administratively liable “by reason of his seniority, his moral superiority and his competence,” Gordon said.

He said he would present the report to the Senate plenary when sessions resume in November.

The Senate, Gordon said, would leave it to the Department of Justice (DOJ) and the Office of the Ombudsman to bring the appropriate charges against Albayalde and his subordinates.

In a statement, Justice Secretary Menardo Guevarra said he expected to be furnished a copy of Gordon’s committee report. He said the report “will surely be useful in the reinvestigation of the alleged drug recycling/ninja cops case” by the DOJ.

Gordon also recommended the filing of administrative and criminal charges against Police Maj. Rodney Baloyo, who led the controversial antidrug operation at an upscale subdivision in Mexico town, Pampanga province, on Nov. 29, 2013.

Albayalde, who also served as chief of the National Capital Region Police Office, was then the Pampanga provincial police chief while Baloyo was his top intelligence officer.

“It was not a drug buy-bust. What they really did was ‘hulidap’ (robbery-extortion),” the senator said of that operation in which the confiscated drugs were sold and the police officers allegedly profited from it.

It was Magalong who first disclosed to the Senate that Albayalde had phoned Aquino, then the Central Luzon police director, to ask him not to implement a dismissal order against Baloyo and the other officers.

Aquino initially denied Magalong’s claim but eventually admitted that Albayalde had indeed made the call and request.

Magalong also testified that Baloyo’s group could have recovered as much as 200 kilos of shabu, but only declared 38 kilos.

He further disclosed that they had earned another P50 million for letting go of alleged drug lord Johnson Lee, the target of the operation who was later replaced by another suspect before the case was dismissed.

Lacadin told the Senate inquiry that Albayalde had also contacted him and confided that he “got only a little” from that operation. 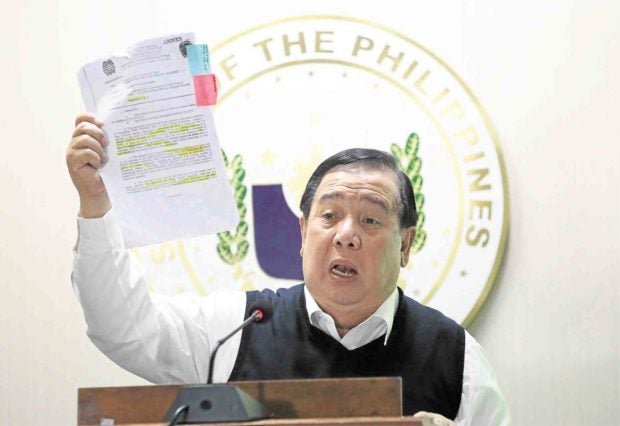 “When you misappropriate the drugs [you confiscated] and you sell it, that’s life imprisonment. When you failed to account confiscated drugs, that’s punished under this law [Republic Act No. 9165, or the Comprehensive Dangerous Drugs Act of 2002]”
Richard Gordon
Senator

Gordon said Albayalde was also liable for violation of Republic Act No. 3019, or the Anti-Graft and Corrupt Practices Act, and Article 208 of the Revised Penal Code for negligence.

He said all police officials clearly committed “malfeasance, misfeasance and nonfeasance” in carrying out their duties as law enforcers.

On Thursday, Mr. Duterte said in a speech at Manila Hotel: “You ninja cops, you holduppers, you drug pushers. You think you are the only tough guys here. Because you think you have a monopoly of evil in this country.”

“It’s a very stupid paradigm because I can be evil like you, and more than, if I want to be,” he said. “But if I decided to be a good boy, I am a good boy. Like now.”

Magalong, in a recent television interview, warned that the police officers involved in the 2013 operation were in danger.

“I hope that some of them start talking unless they end up dead like the civilian agents who [were] involved in that drug operation,” he said. —WITH A REPORT FROM JEROME ANING