William, Kate back in Islamabad after mid-air storm drama 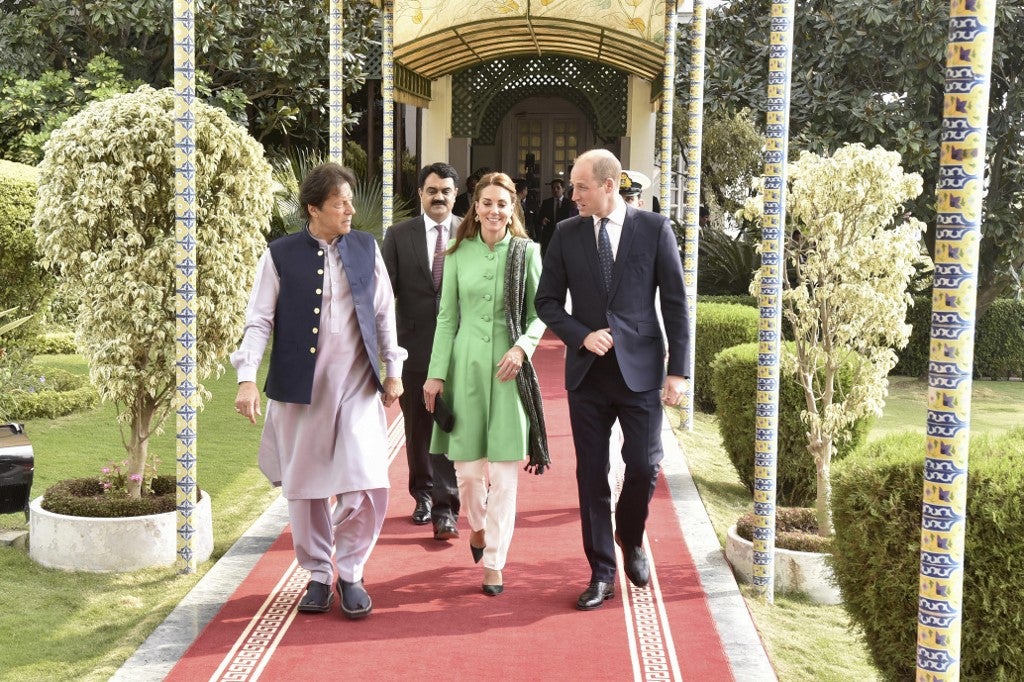 Pakistan’s Prime Minister Imran Khan (L) walks with Britain’s Prince William (R), Duke of Cambridge, and his wife Catherine (C), Duchess of Cambridge, at the Prime Minister House in Islamabad on October 15, 2019. – Pakistani Prime Minister Imran Khan gave a warm welcome in Islamabad on October 15 to Britain’s Prince William, the son of his late friend Princess Diana, who is on his first official trip to the country with his wife Kate. (Photo by STR / AFP)

ISLAMABAD — Britain’s Duke and Duchess of Cambridge arrived back in Islamabad Friday after spending an unexpected night in Lahore when thunderstorms forced their pilot to abort two landing attempts in the capital, reporters travelling with them said.

Prince William and his wife Kate ended up staying the night at a hotel in Lahore, Pakistan’s cultural capital, before finally flying back to Islamabad Friday morning, according to British royal correspondents on board their plane.

There has been no statement yet from Kensington Palace on Thursday’s mid-air drama, which reportedly saw the Royal Air Force pilot circle for an hour during one of the fierce thunderstorms that periodically hit Islamabad in October, before finally abandoning the attempt and returning to Lahore.

It came after the royals spent a busy day in the eastern city of Lahore, during which they played cricket, visited a children’s orphanage and a cancer hospital, and toured the iconic Badshahi Mosque, one of the world’s largest mosques.

Friday will be their final day in Pakistan.

They are expected to visit an army canine centre in Islamabad before officially departing Friday afternoon.

A planned trip to the famed Khyber Pass — one of the two major border crossings in to Afghanistan — was called off after the flight drama, however.

Kensington Palace had called the trip, the Cambridges’ first official visit to Pakistan, their “most complex” tour to date as the royals seek to boost ties between Britain and the second largest country in the Commonwealth.

They have spent their five-day tour promoting causes such as girls’ education, conservation and climate change awareness.