RIO DE JANEIRO – Crude oil contaminating the northeastern coast of Brazil has reached the town of Maragogi, one of the region’s main tourist beaches, its mayor said on Thursday. 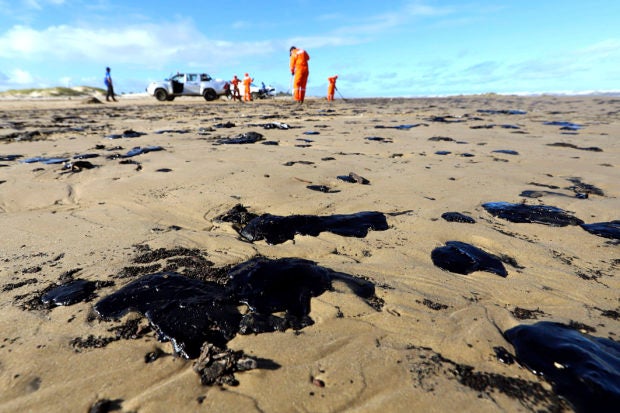 CORRECTS DATE – In this Oct. 7, 2019 handout photo released by the Aracaju Municipal Press Office, workers remove oil from Viral Beach, in Aracaju, Brazil. The oil that has been polluting Brazil’s northeastern beaches since early September is likely coming from Venezuela, according to a report by Brazil’s state oil company cited by the country’s environment minister. The oil sludge has now reached 61 municipalities in nine Brazilian states, contaminating over 130 beaches, in what Brazilian officials have called an “unheard of” disaster. (Andre Moreira/Aracaju Municipal Press Office via AP)

Images on local television showed dozens of people in Maragogi, known for its natural pools of crystalline water, shoveling and raking the sand in an attempt to remove the sludge from the coast. The region is known as the “Brazilian Caribbean.”

As a truck from Brazil’s environmental agency loaded up with oil-stained sand, some volunteers, apparently without supervision from authorities, joined the work with small shovels.

Environmental regulator Ibama reported there are at least 178 locations in nine Brazilian states that have been affected by the oil. In terms of expanse, it is Brazil’s largest-ever environmental disaster, according to David Zee, an oceanographer at Rio de Janeiro’s state university.

The government’s response has been questioned by ocean experts and environmental NGOs such as Greenpeace. As in Maragogi, in recent weeks many Brazilians have worked to remove oil from the contaminated beaches without proper equipment or instruction from authorities.

“Just like with the spread of fires in the Amazon, the government again was late to respond,” Ricardo Baitelo, coordinator of Greenpeace Brazil, said to The Associated Press.

The Brazilian Environment Minister, Ricardo Salles, rebuffed the criticism Wednesday and told local press all necessary means had been adopted for the crude’s identification and collection.

Ibama did not respond to The Associated Press’s phone and email requests for information regarding the number of people and equipment working on the operation.

The origin of the oil remains a mystery. Salles said it likely originated in Venezuela – which Venezuela’s government denies – and that the circumstances of the spill are unknown.

Authorities’ primary hypothesis is that the crude spilled into the water from a boat navigating near Brazil’s coast.

Workers from Ibama, state-run oil company Petrobras and other volunteers have collected hundreds of tons of crude, but the mysterious oil slicks could continue to wash ashore.

A month and a half after oil began appearing on the coast, Salles said he did not know how much oil was still at sea and could reach the mainland in coming days.

Zee expressed concern the oil spill could advance toward the south of Bahía state and damage the Abrolhos region that contains one of the nation’s largest coral reefs.

“The more time that passes with new oil appearing, it’s confirmed that the ocean is absorbing ever more toxic substances, some of which are carcinogenic. The contaminated zones will take at least 25 years to recover,” said Zee. “Brazil has no emergency plan, equipment, nor trained personnel to intervene in a disaster situation like this.” /gsg