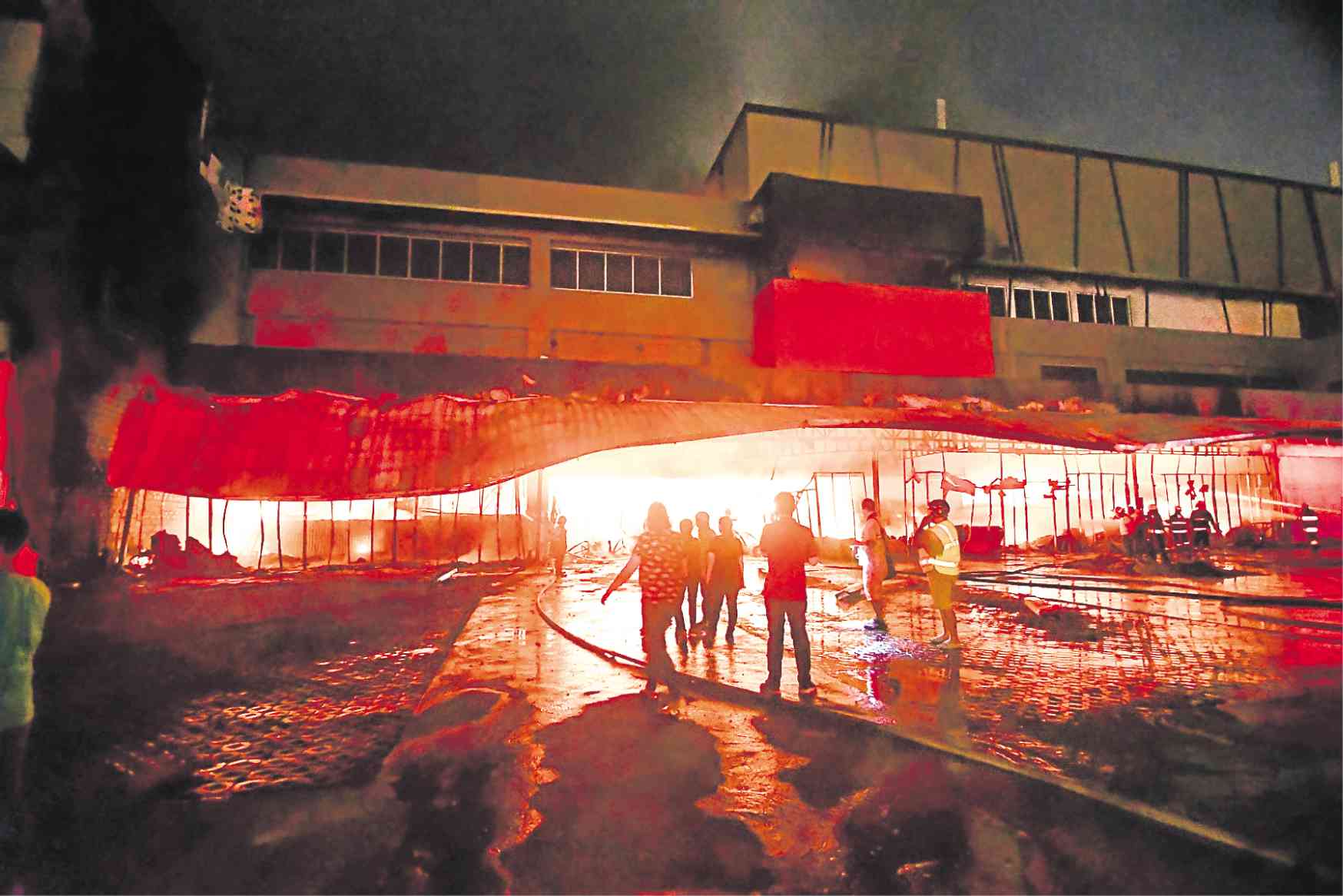 QUAKE FIRE Firefighters scramble to put out a blaze that threatens to engulf the Gaisano shopping mall in General Santos City following an earthquake on Wednesday night. —AFP

DAVAO CITY—A baby, a toddler and a 7-year-old were among at least five people who lost their lives to a 6.3-magnitude quake that shattered walls of buildings, left cracks on the ground and created panic in a large part of Mindanao on Wednesday night.

A fire that started shortly after the quake razed a shopping mall in General Santos City.

The quake, a shallow temblor of tectonic origin, struck around 7:37 p.m. with a depth of focus of only 8 kilometers.

On Thursday, a 5.2-magnitude temblor was also recorded east of Manay town, Davao Oriental province, around 4:53 a.m. It was also tectonic in origin.

It was not related to the previous temblor, according to the Philippine Institute of Volcanology and Seismology (Phivolcs).

Chrisjoy Chuan Roda, a 2-year-old boy, was reported to be sleeping when a concrete block from a crumbling wall fell on him in their house in Magsaysay’s San Isidro village, according to Anthony Allada, municipal information officer.

In Malawanit village, also in Magsaysay, the quake caused a landslide that buried a house, killing Argen Abundo and her 9-month-old baby, Jay Lakay,  Allada said.

In Maguindanao province, a 7-year-old girl was pinned down when the concrete wall of her house collapsed in Barangay Damawato, Datu Paglas town.

The incident was reported by Vice Mayor Maureen Villamor of Tulunan, which shares a border with Damawato.

The girl was taken to a hospital but was declared dead upon arrival, said Earnie Diaz, municipal disaster risk reduction and management officer of Tulunan.

In nearby M’lang, Tony Pananggulon had a heart attack during the quake and died, according to the town’s vice mayor, Joselito Piñol.

Phivolcs said the epicenter of the quake was 22 km southeast of Tulunan, where it was felt at Intensity 7, along with Kidapawan City and M’lang.

Intensity is the strength of shaking produced at a certain location, while magnitude is the measurement of the energy released at the quake’s source, according to the US Geological Survey.

Based on the Phivolcs Earthquake Intensity Scale, Intensity 7 is described as “destructive” and can result in considerable damage to poorly built structures and slight damage to well-built ones.

In an interview, Phivolcs science research analyst Julius Galdieno said the quake was triggered by a local fault.

“It was very shallow, that’s why it caused large damage,” he said. “We’re expecting more aftershocks, which is normal with a strong earthquake with such magnitude.”

In Magsaysay, the blocks installed on the parapet of the municipal hall roof partly damaged the ceiling of the relatively new building.

The quake also shattered some of the building’s glass walls while some of the surrounding fences crumbled.

Mayor Davin, who was returning from Davao City at the time of the quake, said he was told by members of his staff on the phone that they could hear a gurgling sound as the ground shook.

He issued an advisory calling off school and work at the municipal hall to ensure safety and allow local officials to assess the damage.

The fire that razed Gaisano Mall in General Santos was put out by 1 p.m. on Thursday, 18 hours after it started.

“The earthquake is a reminder that we still have a lot of things to do to improve the disaster preparedness and resiliency against natural and man-made calamities,” said the city’s mayor, Ronnel Rivera.

Davao del Sur Gov. Douglas Cagas also called off school in  both public and private sectors and work in government offices in Digos.

Classes were also suspended in schools at Panabo City and Santo Tomas town.

In eight towns in South Cotabato, classes in public and private schools were suspended on Thursday so that the integrity of campus facilities could be checked. These included Koronadal City and the towns of Tupi, Tampakan, Tantangan, T’boli, Norala, Lake Sebu and Banga.

Officials in the cities of Davao, Cotabato and Cotabato province suspended classes to allow structural engineers to inspect school buildings.

One of the world’s most disaster-prone countries, the Philippines has frequent earthquakes and volcanic activity because it lies on the so-called Pacific Ring of Fire, a seismically active arc of volcanos and fault lines in the Pacific Basin.