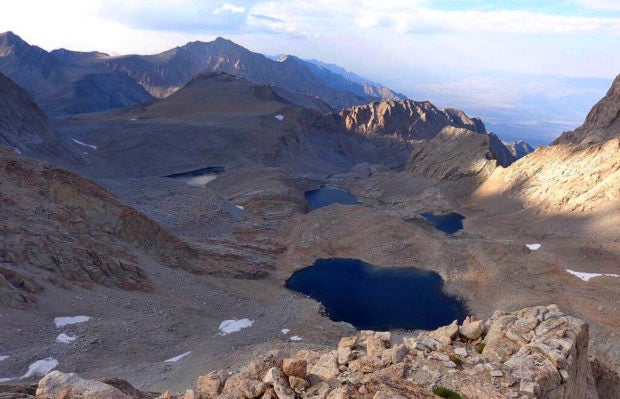 This undated photo provided by the Inyo County Sheriff’s Department shows 6th lake below Mount Williamson where authorities say the skeletal remains of a person were discovered on Oct. 7, 2019 beneath the state’s second-highest peak. The body was discovered by climbers last week who saw what appeared to be a bone beneath boulders. High winds prevented a helicopter from retrieving the body until Wednesday, Oct. 16, 2019, Roper says the body may have been there for decades based on its condition. (Inyo Sheriff’s Department via AP)

LOS ANGELES — The climbers were closing in on the top of California’s second-highest peak when they came upon the grisly discovery of what looked like a bone buried in a boulder field.

Closer inspection revealed a fractured human skull. Tyler Hofer and his climbing partner moved rocks aside and discovered an entire skeleton. It appeared to have been there long enough that all that remained were bones, a pair of leather shoes and a belt.

The discovery a week ago beneath Mount Williamson unearthed a mystery: Who was the unfortunate hiker? How did he or she die? Was the person alone? Were they ever reported injured, dead or missing?

The Inyo County Sheriff’s Department doesn’t have any of those answers yet. But it retrieved the remains Wednesday in the hopes of finding the identity and what happened. There’s no evidence to suggest foul play, spokeswoman Carma Roper said.

“This is a huge mystery for us,” Roper said.

The body was discovered Oct. 7 near a lake in the remote rock-filled bowl between the towering peaks of Mount Tyndall and Williamson, which rises to 14,374 feet (4,381 meters). The behemoth of a mountain looms large over the Owens Valley below and overshadows the former World War II Japanese internment camp at Manzanar.

Hofer and a friend had gone slightly off the trail-less route as they picked their way through boulders when they stumbled upon the shocking find.

“The average person who was hiking to Williamson wouldn’t have gone the route we went because we were a little bit lost, a little bit off course,” Hofer told The Associated Press. “So it made sense that nobody would have stumbled across the body.”

Hofer phoned from the summit to report the finding and went to the sheriff’s department the next day after hiking out to speak with investigators.

Sgt. Nate Derr, who coordinates the county’s search and rescue team, said bodies found in the mountains are typically connected with someone they know who has gone missing. The opposite is rarer: finding the remains of someone who appears to not have gone missing or been reported as missing.

They plan to use DNA to try to identify the remains.

Because the body was so decomposed, investigators believe it’s possibly been there for decades.

Authorities have ruled out that it’s 1st Lt. Matthew Kraft, a Marine from Connecticut who vanished in February during a nearly 200-mile (320-kilometer) ski trek through the Sierra. Derr also doubts it’s Matthew Greene, a Pennsylvania climber last seen in the Mammoth Lakes area — nearly 70 miles (112 kilometers) north — in 2013.

Investigators have gone back through decades of reports of people missing in the Inyo National Forest and come up empty, Derr said. Neighboring Sequoia and Kings Canyon national parks also don’t have reports of anyone missing in that area, he said.

Bodies of those who go missing in the mountains are discovered from time to time, but it can take years and even decades.

It took five years — after an exhaustive search was called off — before a trail worker discovered the body of Randy Morgenson, a Kings Canyon National Park ranger who vanished in 1996. A World War II airman whose plane had crashed near Mount Mendel on a training flight in 1942 wasn’t found until 2005 when a receding glacier gave up his body.

Hofer, a church pastor in San Diego, said it appeared to him the body was intentionally buried. The skeleton was laid out on its back with the arms crossed over the chest.

“It wasn’t in a position of distress or curled up,” Hofer said. “It was definitely a burial because it was very strategically covered with rocks.”

The death could have occurred in the days before helicopters were used to fly out bodies, Derr said. It’s possible that the person perished on the mountain and was buried by a climbing partner.

“I can’t say whether it’s intentional or not, but it’s not an area that would be prone to rockfall,” Derr said.

Although the mountain is the state’s second-highest, it’s not summited as frequently as other high Sierra peaks because it is a forbidding approach. The elevation gain from the trailhead in the high desert to the summit is the greatest of any peak in California.

It can take more than a day to hike over Shepherd Pass and then the trail ends, and climbers have to make a tedious scramble over rock fields and sand across Williamson Bowl — where the body was found — before climbing the final 2,000 feet (600 meters) up a chute that includes moments of breathtaking exposure while picking their way up a rock face.

Hofer posted about his finding on a mountaineers forum on Facebook that sparked speculation about the death, in part because Hofer described the shoes as the type worn by rock climbers.

That seemed unusual because the area is not well known for rock climbing. And, because most climbers work in pairs, it raised questions about what had happened to any partner or whether the death had been reported.

Derr said he did not think they were climbing shoes but couldn’t rule that possibility out.

Hofer said he summited the peak after his discovery and wasn’t haunted by the image.

He was more excited he might be able to let someone know about a lost loved one as he ran through the various scenarios of how the body got there.

“A couple of times we said out loud, ‘This is really crazy that we found a body there that no one knew about,'” he said. /jpv