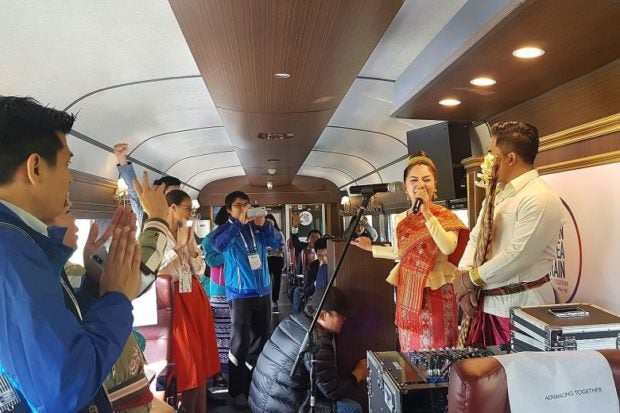 Participants on board the Asean-Korea Train watching a performance yesterday. Some 200 delegates from 10 Asean member states and South Korea took the one-time train travelling towards the southern port city of Busan in the lead up to the Asean-Korea Commemorative Summit. ST PHOTO: CHANG MAY CHOON

BUSAN — South Korea has reiterated hopes for North Korean leader Kim Jong Un to visit the southern port city of Busan as an observer for a special summit involving all 10 Asean nations, just as a 40-day countdown to the event was launched.

Mayor Oh Keo-don told a media conference yesterday that Busan “wants to be the city to host Kim Jong Un” and lay a foundation for peace on the Korean peninsula.

He recalled how Busan “gave a warm welcome” to a North Korean team years ago. “I think there is some possibility of Kim Jong Un visiting this time around,” he added.

Mr Lim Sung-nam, South Korea’s ambassador to Asean, said a visit by Mr Kim will be “very meaningful and will continue the peace process on the Korean peninsula”.

For now, Mr Kim’s visit is “neither guaranteed nor completely out of the question”, said Mr Lim.

The hopeful message came as Seoul launched the one-time Asean-Korea Train travelling towards Busan in the lead up to the Asean-Korea Commemorative Summit, which is expected to draw leaders from all 10 Asean nations.

South Korea’s intelligence agency last month raised the possibility of Mr Kim’s visit to Busan, but experts said chances are low unless progress is made on stalled nuclear talks with the US. Inter-Korea ties remain frozen as well.

The Asean-Korea summit is slated to be held from Nov 25-26.

Bilateral ties have deepened since Mr Moon launched the New Southern Policy aimed at raising collaboration with Asean to the level of South Korea’s four major partners – the US, China, Japan and Russia. He fulfilled his promise to tour all 10 Asean states last month.

South Korea already has a free trade agreement with the regional bloc. Plans are underway to conclude individual deals with Indonesia, the Philippines and Malaysia.

Yesterday’s train journey drew 200 participants, including ambassadors from all Asean countries, government officials and performers. The train made a stop at the ancient capital city of Gyeongju. It will also stop at Suncheon and Gwanju today, before returning to Seoul.