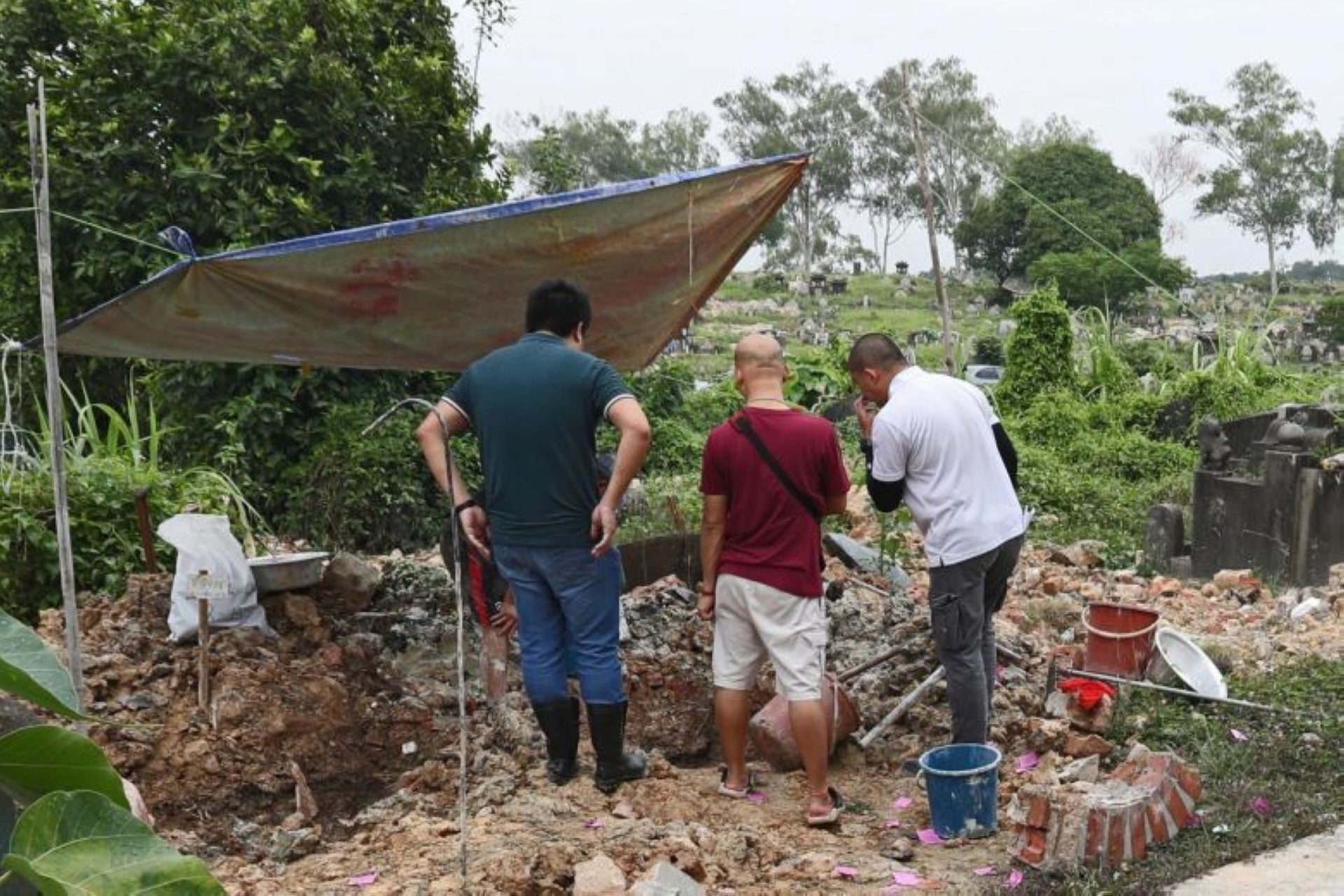 The National Environment Agency found that the tombstone of one grave at Choa Chu Kang Chinese Cemetery was misaligned, which led to other adjacent headstones being wrongly tagged to grave plots. PHOTO by LIANHE WANBAO via The Straits Times/Asia News Network

SINGAPORE — For 39 years, Marn Chuan Lee paid respects to his grandmother’s grave at least once every three months; keeping the grave tidy and even installing garden lights by her tombstone.

However when the grave in Choa Chu Kang Chinese Cemetery was exhumed in August this year, he knew it did not belong to his grandmother as it contained stuffed toys, color pencils and a necklace he did not recognize.

The 50-year-old was shocked. “I thought I was going crazy. It felt like someone kidnapped her and we had no idea where she could be,” he told The Straits Times.

He informed the National Environment Agency (NEA), which on Oct 2 exhumed two unclaimed graves adjacent to the one that supposedly belonged to Marn’s grandmother.

Based on the agency’s analysis, the tombstone of one grave was misaligned, which led to other adjacent headstones being wrongly tagged to grave plots.

But the adjacent graves contained men’s clothing, and nothing resembling his grandmother’s belongings.

Responding to queries on Wednesday (Oct 16), an NEA spokesman said the burials were performed on a single day 39 years ago.

“The next of kin of one of the grave plots did not erect a headstone, and due to the misalignment, one of the headstones was found to be straddling the space over two grave plots.”

The misalignment affected nine graves in all.

She added that NEA has since verified the buried remains with all the affected families. The agency also apologised for the inconvenience caused.

This episode of misaligned tombstones is the first time the NEA has encountered such an issue in the 16,800 exhumations conducted as of Sept 30 this year under Phase 7 of its exhumation programme at Choa Chu Kang Cemetery, its spokesman said.

Marn said he was “going crazy” waiting for the NEA to help locate his grandmother’s remains.

“I couldn’t focus at work, eat, or sleep,” he said, adding he contacted Chinese evening daily Lianhe Wanbao about the matter because he felt helpless.

The NEA spokesman said the agency was initially unable to proceed further, as it needed to exhume the adjacent graves to verify the buried remains with its records.

But some of the graves were unclaimed and the window for claims was still open then, she noted. The deadline to register claims lapsed on Sept 30,2019.

About 8,500 graves have yet to be claimed, said the NEA. Any unclaimed remains will be cremated and stored for three years before sea burial.

Marn has since cremated his grandmother’s remains, but said he is afraid of storing her ashes at a crematorium in case there is a mix-up again.

He was close to his grandmother, as she had cared for him and his six siblings every day while they were growing up until she died when he was 12.

He is keeping her ashes in his house, while waiting to house them at a Chinese temple.

Said Marn: “I only just got (my grandmother) back, I’m scared I might lose her again.”