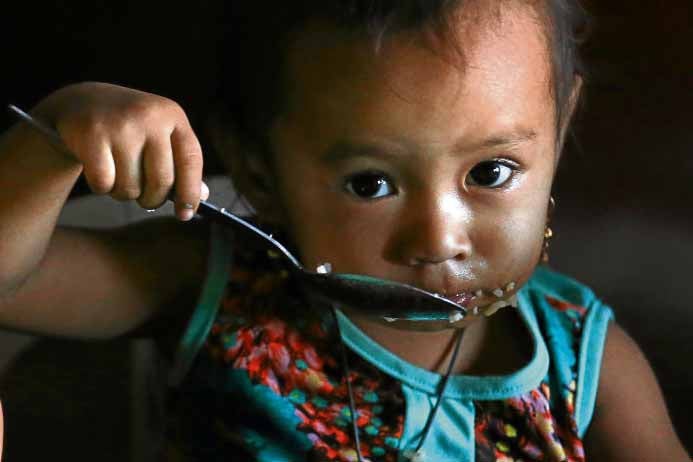 FEEDING TIME A malnourished child eats rice porridge and adobo at a feeding session held in Baseco, Tondo, Manila. According to Unicef, malnutrition is partly driven by the increasing availability of processed food, especially to poor families. —INQUIRER FILE PHOTO

MANILA, Philippines — The Philippines is losing P232 billion ($4.5 billion) each year due to malnutrition, which is partly driven by the increasing availability of processed food, especially to poor families, according to estimates by the United Nations Children’s Fund (Unicef).

While more children are surviving today, “far too few are thriving” since the food they consume are low in essential nutrients, it said.

As a result, one out of three kids below 5 years old in the Philippines is stunted, or too short for his or her age, according to Unicef.

Dr. Rene Galera, a Unicef nutrition specialist, pointed out that because of undernourishment, children suffered from long-term developmental delays. These include performing poorly in school and getting sick often, which burdens the public health system.

Such factors adversely affect people’s productivity and are estimated to cost the economy P232 billion yearly.

Because of the economic impact of malnutrition, Galera said the government must increase its investments in health and nutrition to help ensure that children were growing up healthy.

He pointed out that “to really make a dent” in a child’s nutritional outcomes, at least P51 billion ($1 billion) should be allocated annually.

“For every dollar invested, the economic return is $12. This is why we have to consider nutrition’s economic cost,” Galera told reporters at the study’s Manila launch on Wednesday.

According to Dr. Anthony Calibo, officer in charge of the disease prevention and control bureau of the Department of Health (DOH), the national government spent last year some P1.9 billion for its nutrition programs.

Taking into account what local governments and their regional offices spent, Calibo said that the figure went up to around P4 billion. But this was still just 8 percent of Unicef’s suggested allocation.

This is why the National Nutrition Council (NNC) proposed in its 2020 budget that it be granted P6 billion to help finance its dietary supplementation program, especially that a 2018 study showed that only a little over 13 percent of children aged 6 to 23 months met the minimum acceptable diet.

A minimum acceptable diet is defined as the consumption of at least four of the seven food groups.

Calibo acknowledged that poverty was indeed a major reason children were often fed processed food, such as instant noodles.

He advised families to consider other cheap alternatives because processed foods could damage one’s kidneys in the long term.

Dr. Azucena Dayanghirang, NNC executive director, said the council would be meeting with representatives of fast-food chains and processed food manufacturers before the yearend to discuss how their products could be made healthier.

“In order for us to really combat this kind of problem, we would like food chains, especially fast-food ones, to reformulate and produce healthy options for Filipinos, especially children,” Dayanghirang said.

At the same time, Calibo said there must be a stronger regulatory framework on food marketing “to address the harmful impact” of processed food.

Earlier, the World Health Organization expressed concern that processed food and sugary drinks had become “cheaper and more accessible than their healthier alternatives” in the Western Pacific region, which includes the Philippines.

“In some parts of the region, more than 90 percent of all food and drinks marketed to children are high in saturated fats, trans fats, sugar or salt,” said Dr. Takeshi Kasai, WHO director for the Western Pacific.

Because poor children are more exposed to unhealthy food and drinks, they are likely to consume these more often than those from well-off families, according to Kasai.

He said that due to this lifestyle, poor children were at greater risk of developing chronic ailments.

“Children who have a healthier habit in the earlier stage of their life will continue to have a healthy lifestyle. Those who cannot establish that kind of lifestyle have a higher risk [of developing] hypertension, diabetes, obesity. Those noncommunicable diseases are threats to our children in the future,” Kasai said.