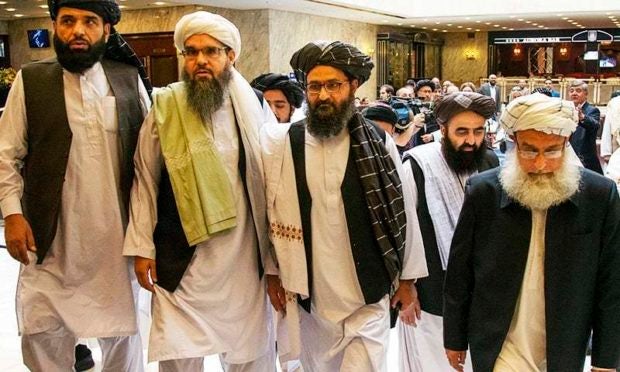 A recent New York Times report noted that the first US-Taliban meeting after the collapse of the peace talks was held in Islamabad last week when both US and Taliban officials visited the Pakistani capital. AP FILE PHOTO via Dawn/Asia News Network

WASHINGTON — US and Taliban officials have resumed their discussions to revive the peace process that derailed last month after coming tantalisingly close to an agreement, the US media have reported.

The talks “touched on confidence-building measures that could include a possible prisoner swap or a reduction in violence,” according to The Wall Street Journal.

A recent New York Times report noted that the first US-Taliban meeting after the collapse of the peace talks was held in Islamabad last week when both US and Taliban officials visited the Pakistani capital.

Diplomatic sources in Washington say that Pakistan is also playing a key role in these talks that aim to end the 18-year old Afghan war. Early this month, Pakistan hosted US Special Envoy Zalmay Khalilzad and Taliban leader Mullah Baradar.

In an interview to WSJ, Rick Olson, a former US Special Representative for Afghanistan and Pakistan, disagreed with US President Donald Trump’s claim last month that talks with the Taliban were dead.

Mr Trump’s declaration that the talks were dead was “rhetorical overkill,” he said. “The structural conditions — a deteriorating stalemate — have not changed, so both sides need to talk,” said Mr Olson, who has also served as the US ambassador to Islamabad.

Laurel Miller, who was the acting special representative for Afghanistan from 2013 to 2017, believes that the United States needs to take the lead in resuming the peace process.

“The US is going to have to find a way to demonstrate, both to the parties in Afghanistan but also to the important countries in the region, that it’s still serious about negotiating and that it’s not simply fickle,” she said in a recent interview to the National Public Radio, one of the largest radio networks in America.

Peace in Afghanistan has remained elusive despite several recent efforts to find a negotiated settlement to this complex issue.

Early last month, President Trump made a surprise announcement, saying that he had invited Taliban leaders to a presidential resort near Washington to sign a peace deal with the United States. But he also said that he cancelled the plan after a Taliban attack near Kabul killed an American soldier and dozens of others.

But last week, at a rally in Minnesota, Mr Trump indicated that he was ready to re-engage with the Taliban. “The single greatest mistake our country made, in its history, was going into the quicksand,” Mr. Trump said. “We’re pulling people out and we’re trying to make good deals and we’re going to bring our soldiers back home.”

US officials told various media outlets that a reduction in violence could be modeled on the cease-fire that took place in June 2018, to enable Afghans to celebrate Eidul Fitr. The three-day cease-fire allowed Afghan rivals to meet each other and rekindled their desire for peace.

To re-create that atmosphere both sides have also suggested a prisoner swap. This would include the US side releasing Anas Haqqani, a high-ranking member of the Taliban-affiliated Haqqani network.

In exchange, the Taliban would give up two professors, an American and an Australian, who were kidnapped on their way home from teaching at the American University of Afghanistan in 2016.

Yet another suggestion, being discussed in US-Taliban meetings, is to revive a deal that both said was ready for signing before President Trump cancelled the ceremony.

The proposed deal calls for the withdrawal of about 5,000 US troops within 135 days after it is signed. The remaining 10,000 US troops would be pulled out within a year after the deal is signed.

In return, the Taliban would renounce all ties to Al Qaeda, a process the US is entitled to verify.