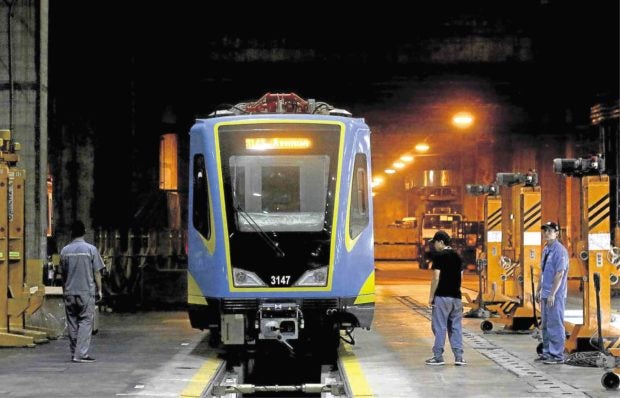 NIGHT TRAIN A Dalian train will make nightly runs until November to allow Sumitomo to observe it. —RICHARD A. REYES

One of the 16 Dalian trains will join the nightly deployment of the Metro Rail Transit (MRT) 3 for a month-long trial run as the Department of Transportation (DOTr) tries to strike a deal with a Japanese consortium to take over maintenance of the China-made trains.

The Dalian train, one of three that had completed the required validation and commissioning tests for their inclusion in the MRT 3’s regular fleet, would operate between 8:30 and 10:30 p.m. starting on Oct. 15 until next month.

Each train set, composed of three coaches each, can carry 1,050 passengers per run.

The monthlong trial, according to Transport Assistant Secretary Goddes Hope Libiran, was aimed at allowing Sumitomo-Mitsubishi-TESP “to understand the operations and maintenance requirements of the [Dalian] trains.”

The DOTr is trying to make a deal with the Japanese group to include the China-made trains in the ongoing 43-month multibillion-peso rehabilitation of the MRT 3 system.

The current contract covers only the current MRT 3 fleet consisting of 72 light rail vehicles and railways, on top of other facilities.

“After Sumitomo’s study and when the rehabilitated MRT 3 system is already able to run the trains regularly, a supplemental maintenance fee will be discussed with Sumitomo,” Libiran said.

The Japanese maintenance provider agreed to allow the limited deployment of one Dalian train until November, when rail replacement work would begin.

Both Congress and the public have been urging the DOTr to add the Dalian trains to the MRT 3 fleet, especially after an independent assessment conducted by a third party showed that despite minor compatibility and equipment issues, the trains bought by the Aquino administration were safe to run.

Libiran said both the DOTr and Sumitomo-Mitsubishi-TESP were “still balancing the requirements for fixing the degraded existing system and on the other hand, expanding capacity with the addition of Dalian trains.”

“Capacity is not just additional trains. Capacity is also faster speed and shorter headway, which require us to rehabilitate the tracks, and fix and upgrade the signaling system,” she added.

The lone Dalian train which will be deployed until next month, along with two others, had finished earlier this year the commissioning tests, which included a 1,000-km validation run and a 150-hour pilot test.

The DOTr, however, had to stop the tests after maintenance of the MRT 3 was turned over to Sumitomo sometime in May.

Some 15 other Dalian trains have been sitting unused in the MRT 3 depot since these were delivered in batches between 2015 and 2017.