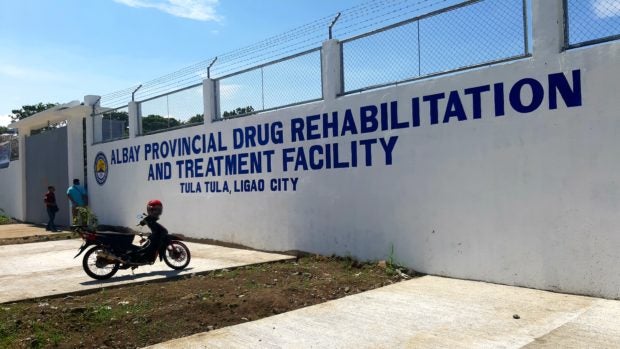 LIGAO CITY—Officials inaugurated a P40 million drug rehab facility in this city on Tuesday, Oct. 15, for users or addicts in the province of Albay.

Given the unimaginative name Albay Provincial Drug Rehabilitation and Treatment Facility, the rehab center has been funded by the provincial government and sits on land at the village of Tula-Tula Grande.

The center is housed in two dormitory-type buildings with a staff of 10 expected to take care of 150 patients.

The inauguration rites were led by the province’s governor, Al Francis Bichara, and Director General Aaron Aquino, head of the Philippine Drug Enforcement Agency (PDEA). Priority in the center are “patients originating from the province,” said the governor.

Dr. Antonio Ludovice, Albay health officer, said the center would accept addicts who volunteer for treatment or those referred by local government units and courts.

Patients would pay P150 per day of stay at the rehab center, said Ludovice.

Aquino said the construction of the rehab facility was commendable and that he hoped it would be replicated in other regions.

At least 1.3 million drug suspects had presented themselves to authorities while 42 percent of villages nationwide had been cleared of drugs, according to Aquino.

There are at least 12,000 more villages that need to be cleared of drugs, said Aquino. Authorities want to accomplish this in three years, he added.

The PDEA chief admitted the fight against drugs is no walk in the park because syndicates “continue to penetrate our market.”

Drugs are still able to slip through entry points “that are not heavily guarded,” said Aquino.

He appealed to mayors and governors to help in the campaign as the PDEA has only 1,900 agents.

“If Filipinos will not unite, the Philippines will never be cleared of drugs,” he said. Michael B. Jaucian/TSB