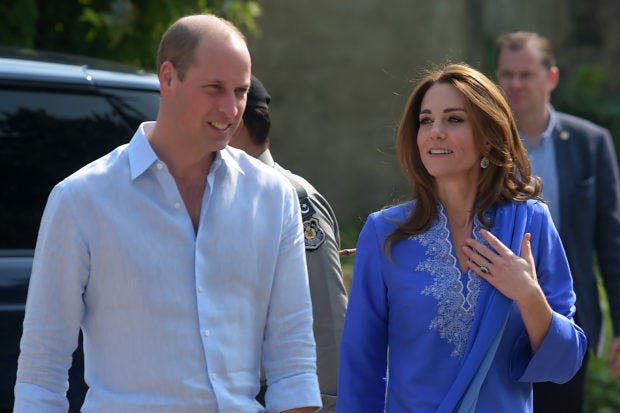 Britain’s Prince William (L), Duke of Cambridge, and his wife Catherine (R), Duchess of Cambridge, arrive during their visit to a government-run school in Islamabad on October 15, 2019. – Prince William and his wife Kate signalled their support for women’s education on October 15 by making a girls school in Islamabad the first stop on their inaugural tour of the deeply patriachal country. (Photo by Aamir QURESHI / AFP)

ISLAMABAD — Britain’s Duke and Duchess of Cambridge, Prince William and Kate Middleton, arrived on their first visit to Pakistan on Monday evening.

The royal couple was welcomed by Foreign Minister Shah Mahmood Qureshi and his wife after their airplane landed at the Nur Khan Airbase near the capital. British High Commissioner in Pakistan Thomas Drew was also present on the occasion.

William and Kate disembarked from the Royal Air Force plane onto a red carpet that had been rolled out for them.

The five-day visit, which will end on October 18, has been organized at the request of the United Kingdom’s (UK) Foreign and Commonwealth Office.

Foreign Minister Qureshi, while speaking to the media at Nur Khan Airbase earlier, recounted the past visits to Pakistan by members of the British royal family.

The minister noted that the Duke and Duchess of Cambridge will travel across the country as part of a “very elaborate” program. “I am glad that the people-to-people contact that will be established will generate goodwill,” he said.

This will be the first royal tour to the country since 2006 when Prince Charles and Camilla, the Prince of Wales and the Duchess of Cornwall, travelled to Pakistan.

Taking to Twitter earlier in the day, British High Commissioner Thomas Drew said it will be a “very exciting programme”.

“It will of course pay respect to the historical relationship between Britain and Pakistan. But it will focus largely on showcasing Pakistan as it is today: a dynamic, aspirational and forward-looking nation,” he said.

He added that the royal couple was looking forward to meeting as many Pakistanis as possible and building a lasting friendship with the people of Pakistan.

During their time in Pakistan, the Duke and Duchess of Cambridge will visit Islamabad, Lahore, Gilgit-Baltistan and rugged border regions to the west, an official handout from Kensington Palace had stated. The visit will span over 1,000 kilometres, and will take in Pakistan’s rich culture, its diverse communities, and its beautiful landscapes, the handout said.

“Access to quality education, particularly to girls and young women is one of the UK’s top priorities in Pakistan,” it added.