Cybercrime on the rise over the last 6 years 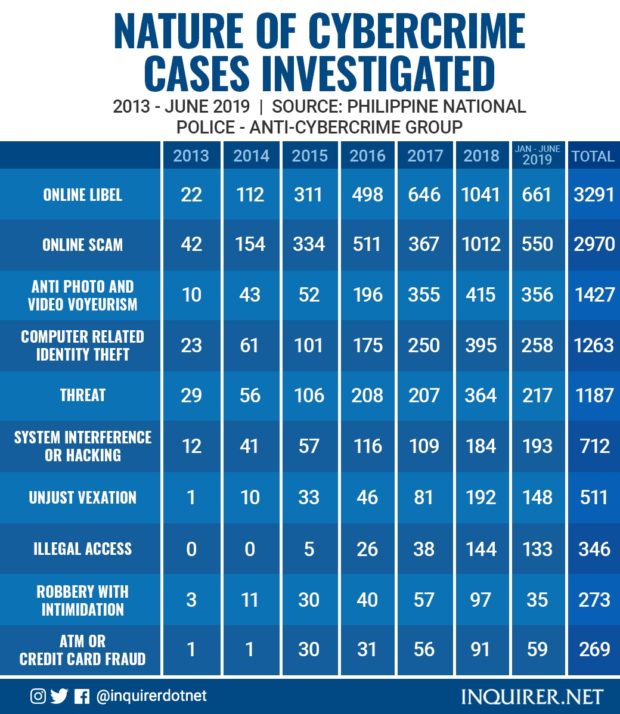 MANILA, Philippines — As the number of internet users in the country increases, the Philippine National Police (PNP) has also recorded a consistent upsurge in cases of cybercrime over the last six years.

Data from the PNP Anti-Cybercrime Group (ACG) showed that online libel cases soared from only 22 incidents in 2013 to 661 from January to June 2019; as well as online scam cases from 42 to 550; photo and video voyeurism cases from 10 to 356; and computer-related identity theft cases from 23 to 258.

Maj. Levy Lozada, spokesperson of the PNP-ACG, attributed the swelling figures to the rising number of internet users in the country.

(Of course when the number of Internet users increase, the vulnerable community also spreads, especially if they are not aware of the do’s and don’t’s in the internet.)

Lozada’s statement supports the results of a survey conducted by the Social Weather Stations for the first quarter of 2019. The survey released in June,  showed that 46 percent of Filipino adults are internet users.

In January, the Digital 2019 report by the creative agency We Are Social and social media management platform Hootsuite likewise showed that the Philippines ranked as the top country worldwide in time spent surfing the internet and social media.

If all reported cases from 2013 until June 2019 will be consolidated, the data will show that online libel is the cybercrime most committed in the country, with 3,291 incidents recorded nationwide during the period.

According to Lozada, cybercriminals take advantage of the internet since it can be easily accessed, and because of the anonymity one can possess upon its usage, which he said is the “favorite” factor of offenders in committing illegal acts.

He added that the level of knowledge of Filipinos on cybercrime differs due to the geographical condition of the country, with the awareness level possibly high in urban areas and low in far-flung places.

To address this situation, he said the PNP-ACG is regularly conducting seminars and awareness campaigns in schools and communities to prevent the public from falling prey to these crooked activities, which he said now includes new moduses such as business email compromise and those involving the use of bitcoin.

Currently, he said the PNP-ACG has not monitored a group or syndicate preying on internet users, since most of the cases reported to police are committed by individuals acting on their own.

Aside from typical crimes committed online, Lozada said even terrorists have taken advantage of social media in recruiting Filipino youth into their groups and in spreading propaganda to earn the support of  terror groups  in other countries.

He said this has been a practice of local and international terrorists over the previous years since the advent of social media, and that the youth who lack basic education may potentially be more prone to this recruitment.

While the PNP-ACG holds no data on the recruitment of youth into terror groups, Lozada suspects that online recruitment, as in typical cybercrime cases, has also been expanding.

There are ways for the police to locate terrorists recruiting youth into their movement, but this, he admitted, is also a “challenge” to the police.

If he was to rate the capabilities of the PNP-ACG in combating cybercrime, Lozada said the unit will be graded eight out of 10, as he claimed the group currently has the necessary equipment that meet international standards.

He added that personnel of the PNP-ACG also often receive training from foreign counterparts, mostly from Asian countries.

Despite this, Lozada said the police unit is faced by the challenge of procuring additional equipment that has been upgraded over the past years.

“May mga bagong technology na wala pa tayo as of now. ‘Yun yung mga hindi pa natin [makuha] like halimbawa the advent of Internet of Things. Medyo wala pa kami sa mga aspects na ‘yun (There are new technology that we still do not have as of now. We somehow lack in that aspect),” he said.

Amid the thousands of cybercrime cases being recorded in the country, it seems the PNP-ACG is also embattled with yet another setback — the lack of personnel.

The PNP mandates that the ACG should have 800 officers to adequately address the perils of cybercrime. But as of August 2019, Lozada said the unit only has over 200 members nationwide. Around 90 of these personnel are assigned at the PNP headquarters at Camp Crame in Quezon City.

On Wednesday, October 16, 67 recruits of the PNP-ACG are set to take their oath and augment the police unit. /muf

Read Next
Robredo on Marcos claiming she robbed VP post: Stealing isn’t in my system
EDITORS' PICK
What to watch out for when selecting a video surveillance solution
Heads may roll at BOC, says Palace if sugar smugglers are allowed to use recycled import permits
vivo brings to the Philippines a powerful smartphone with a slimmer body, the vivo Y02s for only PHP 6,499
DOH reports increase in daily COVID-19 deaths, mostly unvaxxed
Palace: Biggest supermarkets in PH commit to sell sugar at P70 per kilo
House energy committee chair Arroyo bats for cheap electricity
MOST READ
DepEd to give teachers P5K cash allowance within first week of classes
Alyssa Valdez to miss Creamline’s AVC Cup campaign
Brian Poe-Llamanzares receives his PhD in Public Administration
Ambulance driver dies of heart attack en route to pick up patient in Biliran town
Don't miss out on the latest news and information.