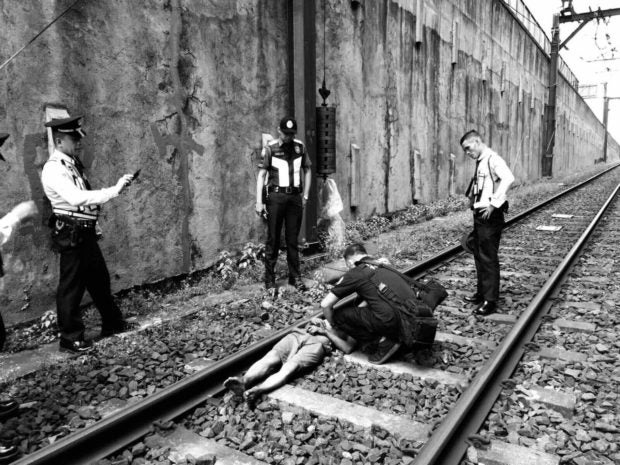 Investigators examine the body of the man identified as Mas Sandamon, of Basilan, Mindanao, as train security officers look on. Photo from MRT-3 management

MANILA, Philippines — A man died after jumping and falling into the train tracks of the Metro Rail Transit Line 3 (MRT-3) in Makati City on Tuesday afternoon.

The man identified as Mas Sandamon, 21, of Marang Sumisip, Basilan, had been described by the MRT-3 management earlier  as a “street vagrant.” He allegedly jumped and fell on the tracks between the Buendia and Ayala stations.

Photos provided by the MRT-3 management showed the man lying straight along the tracks of the MRT-3.

The Makati police station is still determining the background of Sandamon.

At 12:16 PM today, a street vagrant jumped over and fell at the interstation of tracks of Buendia and Ayala.

The matter is now being addressed by concerned MRT-3 personnel, medical personnel, and police authorities.

Train movement is being regulated.