US slaps sanctions on Turkey as Syrian regime returns to north 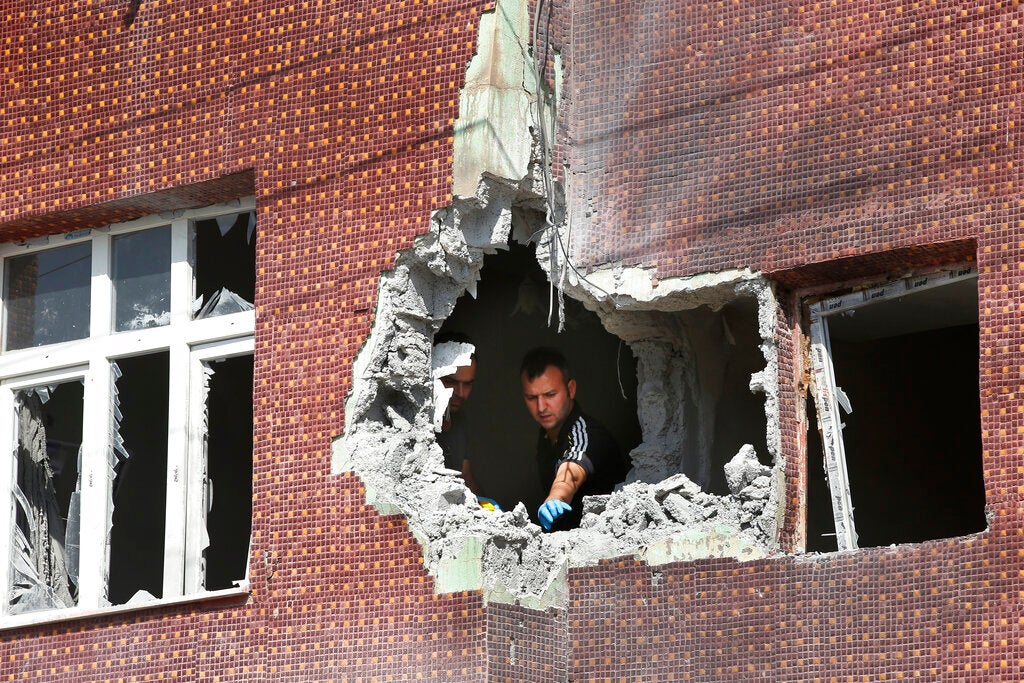 A police forensic officer collects evidence from a building damaged by a mortar fired from inside Syra, in Akcakale, Sanliurfa province, southeastern Turkey, Sunday, Oct. 13, 2019. (AP)

WASHINGTON–The United States slapped sanctions on Turkey Tuesday as it demanded an end to its deadly incursion against Syrian Kurdish fighters, accusing its NATO partner of putting civilians at risk and allowing the release of Islamic State extremists.

The actions came hours after regime troops returned for the first time in years to parts of northeastern Syria, invited by Kurdish fighters desperate for protection as the United States pulls out.

President Donald Trump took extraordinary measures against a country that is officially a US ally as he faces mounting criticism at home, where even usually supportive lawmakers accuse him of abandoning Kurds who had spearheaded the fight against the Islamic State group.

“I am fully prepared to swiftly destroy Turkey’s economy if Turkish leaders continue down this dangerous and destructive path,” Trump, who until recently had touted his friendship with Turkish President Recep Tayyip Erdogan, said in a statement.

The Treasury Department said it was imposing sanctions on Turkey’s defense, interior and energy ministers, freezing their US assets and making US transactions with them a crime.

Vice President Mike Pence said he would travel shortly to Turkey and that Trump had telephoned Erdogan on Tuesday to insist that Turkey end the operation.

“The president of the United States called on the president of Turkey to stop the invasion, to enact an immediate ceasefire and to begin negotiations with Kurdish forces in Syria,” Pence told reporters at the White House.

Trump said he was also ending talks on a US-Turkey trade deal he valued at $100 billion and, in perhaps the most biting reprisal, reimposing tariffs of 50 percent of Turkish steel.

The United States had slapped the 50 percent sanctions on Turkey last year to win the release of an evangelical pastor whose detention had stirred up Trump’s base.

Signaling an escalating rift in relations, Defense Secretary Mark Esper said he would head next week to Brussels to ask NATO allies to punish Turkey over the incursion

NATO has long been seen as keeping Turkey in the Western orbit, but Erdogan angered the United States earlier this year by buying the major S-400 missile defense system from Russia.

Erdogan has vowed to crush the Kurdish-led Syrian Democratic Forces, which Erdogan links to separatist militants inside Turkey.

Turkey wants to create a roughly 30-kilometer (20-mile) buffer zone along its border to keep Kurdish forces at bay and also to send back some of the 3.6 million Syrian refugees on its soil.

The chaos in areas targeted in the six-day-old Turkish assault has already led to the escape of around 800 foreign women and children linked to IS from a Kurdish-run camp, according to Kurdish authorities.

The Kurds had repeatedly warned of that exact scenario when Western countries refused to repatriate their IS-linked nationals and when Trump made it clear he wanted to end the US military presence.

Esper, the US defense chief, said Turkey’s incursion had “resulted in the release of many dangerous ISIS detainees,” although Erdogan accused Kurdish forces of deliberately freeing jihadists to “fuel chaos.”

Trump also mused that the Kurds may be releasing prisoners to keep the United States engaged and, despite his actions Monday, staunchly defended withdrawing troops.

“Anyone who wants to assist Syria in protecting the Kurds is good with me, whether it is Russia, China, or Napoleon Bonaparte. I hope they all do great, we are 7,000 miles away!” Trump wrote on Twitter moments before the statement.

The United States said it is withdrawing all 1,000 troops from northeastern Syria, keeping in the country only its roughly 150 troops in the southern base of Al Tanf near the borders with Jordan and Iraq.

Wasting no time to fill the void, Russia — the top broker in Syria — clinched a deal between the Kurds and Damascus. The two sides had frosty ties since the minority group threw its lot in with Washington and unilaterally declared self-rule as the regime fought rebels elsewhere.

Residents around the town of Tal Tamr welcomed them with cheers and Syrian state television showed some waving national flags and portraits of Assad.

Erdogan had said he expected Kurdish forces to withdraw from Manbij, some 30 kilometers from the border, with the arrival of the regime.

“When Manbij is evacuated, we will not go in there as Turkey. Our Arab brothers, who are the real owners, the tribes… will return there,” he said.

Another flashpoint area has been the border town of Ras al-Ain, where Kurdish-led Syrian Democratic Forces have been putting up stiff resistance against the Turkish assault.

“There is a large tunnel network under the town,” said Abu Bassam, a Syrian rebel commander fighting with Ankara’s forces.

According to the Syrian Observatory for Human Rights, a Britain-based war monitor, the Turkish attack has already left 133 fighters from the Syrian Democratic Forces and 69 civilians dead.

The United Nations says 160,000 people have been displaced.

On the Turkish side, four soldiers and 18 civilians have been killed in six days, either in fighting or from Kurdish cross-border fire, according to Turkish sources.

The Observatory has put the number of pro-Turkish Syrian forces killed at 108.