58 dead, rescuers in ‘day and night’ hunt for missing after Japan typhoon

TOKYO, Japan – Fresh rain threatened to hamper efforts by tens of thousands of Japanese rescuers searching for survivors after a powerful typhoon that by early Tuesday had killed 58 people. 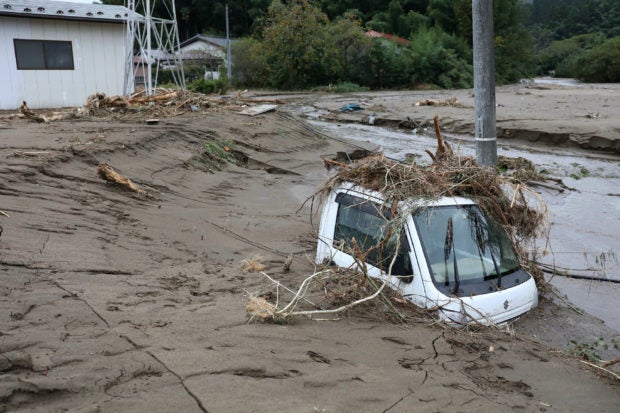 A vehicle is buried in mud after a heavy flood caused by Typhoon Hagibis in Marumori, Miyagi prefecture on October 14, 2019. – Tens of thousands of rescue workers in Japan battled to find survivors of a powerful typhoon that killed at least 43 people, as fresh rain threatened to hamper efforts. (Photo by – / JIJI PRESS / AFP) / Japan OUT

Typhoon Hagibis crashed into the country on Saturday night, unleashing high winds and torrential rain across 36 of the country’s 47 prefectures, triggering landslides and catastrophic flooding.

The death toll from the disaster has risen steadily, and national broadcaster NHK early Tuesday said 58 people had been killed, according to authorities, while more than a dozen were still missing.

The government has given lower numbers but was still updating its information.

“Even now, many people are still unaccounted for in the disaster-hit area,” Prime Minister Shinzo Abe told an emergency disaster meeting on Monday.

“Units are trying their best to search for and rescue them, working day and night,” Abe said.

Later in the day, he pledged to “do whatever the country can” for victims and survivors, ordering the defence ministry to call up to 1,000 reserve troops to join 31,000 active forces in search operations.

But rescue work that continued into the night Monday risked being thwarted by additional rain falling in central and eastern Japan.

“I would like to ask people to stay fully vigilant and continue watching for landslides and river flooding,” Chief Cabinet Secretary Yoshihide Suga told a news conference.

In Nagano, one of the worst-hit regions, officials said they were working cautiously.

“We are concerned about the impact of the latest rain on rescue and recovery efforts,” local official Hiroki Yamaguchi told AFP.

“We will continue operations while watching out for secondary disasters due to the current rain.”

Bodies pulled from flooded cars and homes, swollen rivers and landslides all added to the death toll.

The casualties included a municipal worker whose car was engulfed by floodwaters and at least seven crew from a cargo ship that sank in Tokyo Bay on Saturday night, a coast guard spokesman said.

Four other crew, from China, Myanmar and Vietnam, were rescued when the vessel sank and the coast guard was still searching for a last crew member.

Wind gusts from Hagibis reached up to 216 kilometres (134 miles) per hour, but it was the heavy rains that caused the most damage.

In central Nagano, a levee breach sent water from the Chikuma river gushing into residential neighbourhoods, flooding homes up to the second floor.

Television footage from the area showed patients being transferred by ambulance from a Nagano hospital where some 200 people had been cut off by flooding.

Elsewhere, rescuers used helicopters to winch survivors from roofs and balconies, or steered boats through muddy waters to reach those trapped.

By Monday afternoon, almost 76,000 households remained without power, and water was cut off to 135,000 homes.

The disaster left tens of thousands of people in shelters, many of them unsure when they would be able to return home.

“Everything from my house was washed away before my eyes, I wasn’t sure if it was a dream or real,” a woman in Nagano told NHK.

By Monday most subway trains had resumed service, along with many bullet train lines. Flights had also restarted.

But NHK reported the swamping of a maintenance yard for the Hokuriku bullet train which connects Tokyo with Nagano. Ten trains were damaged when water levels rose by an estimated four metres (yards), NHK said, citing the train operator.

The storm brought havoc to the sporting world, forcing the delay of Japanese Grand Prix qualifiers and the cancellation of three Rugby World Cup matches.

But a crucial decider pitting Japan against Scotland went ahead, leaving the hosts with a stunning 28-21 win they dedicated to the disaster victims.

“To everyone that’s suffering from the typhoon, this game was for you guys,” said Japan’s captain Michael Leitch.