RIO DE JANEIRO – Brazil’s northeastern state of Bahia declared a state of emergency Monday after several of its beaches were contaminated by oil sludge. 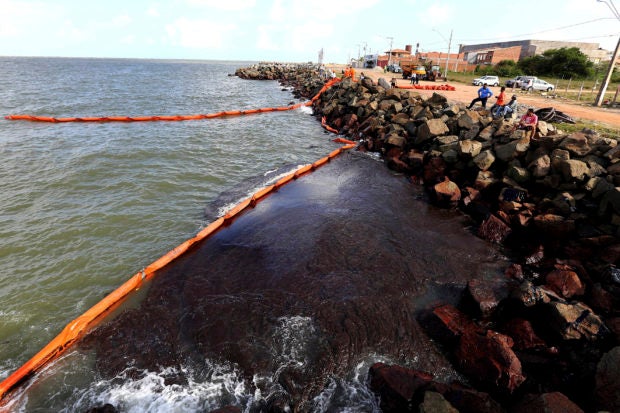 This Oct. 4, 2019 handout photo released by the Aracaju Municipal Press Office, shows rocks stained by an oil spill, on Artistas Beach, in Aracaju, Brazil. The oil that has been polluting Brazil’s northeastern beaches since early September is likely coming from Venezuela, according to a report by Brazil’s state oil company cited by the country’s environment minister. (Andre Moreira/Aracaju Municipal Press Office via AP)

Brazil’s environmental protection agency said Sunday that some 20 beaches in the state popular with tourists had been polluted.

Authorities started finding small oil stains on the northeastern coast at the beginning of September. The sludge has now polluted at least 150 beaches in nine different states.

Brazil’s environment minister has said the oil is very likely of Venezuela origin — a claim denied by the neighboring nation. Brazilian authorities are still trying to determine the source of the leak.

The main hypothesis is that the oil spilled from a vessel passing near the Brazilian coast.

Pictures of red barrels washed up on a beach with the logo of the Shell oil company circulated on social networks in Brazil, but the company denied any wrongdoing in a statement Monday.

The statement said the content of the barrels was not the same product found on the beaches and the barrels might have been reused by another company. /gsg