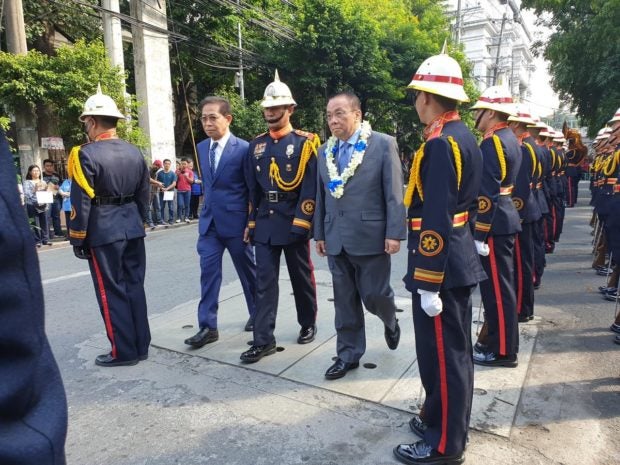 MANILA, Philippines — Chief Justice Lucas Bersamin on Monday said he would leave the judiciary with no regrets.

“I have always endeavored to be true to my oath of office and have always discharged my duties and responsibilities in the best lights that God has endowed me with,” Bersamin said before officials and employees of the Supreme Court.

The high court has been at the receiving end of criticism following its pro-Duterte votes on key issues such as the Marcos burial, dismissal of plunder case against former President Gloria Macapagal-Arroyo, justifying the arrest and continued detention of Sen. Leila de Lima.

Bersamin earlier said that the high court could only decide cases based on their reading of the law and existing jurisprudence.

“Do I now have a better way of putting it except to say that I have faithfully served the people conscientiously, discharged my office and dutifully fulfilled their trust,” he said.

“As that moment draws near, I experienced a deep sense of personal satisfaction, no regrets but this address brings to me mixed emotion. Half of me is happy, the other half is sad, sad because I am leaving this place and bidding farewell to this community that has been my home for over a decade,” he said.

But he said he could not have done all those things if not for the support and cooperation of his colleagues and court employees. 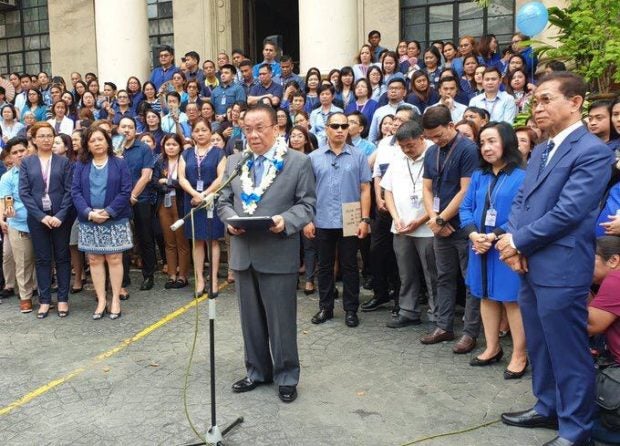 Chief Justice Lucas Bersamin bids goodbye to SC officials and employees during his last flag ceremony a few days before bowing out of the Judiciary. Photo courtesy of SC Public Information Office

For his last flag ceremony, the high court rolled out the red carpet. Bersamin was also greeted by a military honor guard as well as cheering officials and employees of the SC who paid tribute to him.

Bersamin’s fellow magistrates were also in attendance, save for Associate Justice Jose Reyes Jr. who is out of the country.

After the flag ceremony, Bersamin received a plaque of appreciation from the SC Program on Awards and Incentives for Service Excellence Committee for his services to the judiciary.

His mandatory retirement is on Oct. 18.

He said: “Between this morning and my actual retirement, I shall be in my office daily, completing all the tasks that remain to be accomplished. All I ask as I exit from service in the judiciary is just as forthright as that, nothing more.”

“Continue doing your assigned tasks and work but please be constant in your loyalty to the judiciary as our institution and be steadfast in your fealty to the letter and spirit of the Constitution and to the rule of law,” he added.

Bersamin served as the chief justice for 11 months after being appointed by President Rodrigo Duterte to take the post of then-Chief Justice Teresita Leonardo De Castro.

Read Next
‘Disappointment’ if no cases filed vs ‘ninja cops’ – Gordon
EDITORS' PICK
SM continues to send relief assistance to remote towns in Batangas
Museums ‘put to sleep,’ churches closed amid volcano’s unrest
Get exciting deals and discounts when you download the new McDonald’s App
Seventh judge assigned to handle De Lima case
PH preps for China virus: Question of when, not if
Beyond water service: Maynilad builds massive infrastructure projects to clean up Metro Manila waterways
MOST READ
Lacson on Duterte’s threat to end VFA over Bato’s canceled visa: Where is the connection?
Part of Aurora Boulevard in Cubao closed from Jan. 25 – Feb. 1
The humiliating experience that changed Nash’s perception of soldiers
Corruption worsens: PH falls 14 notches to 113th spot in global index 2019
Don't miss out on the latest news and information.