New Orleans hotel collapse: Search on for a missing worker 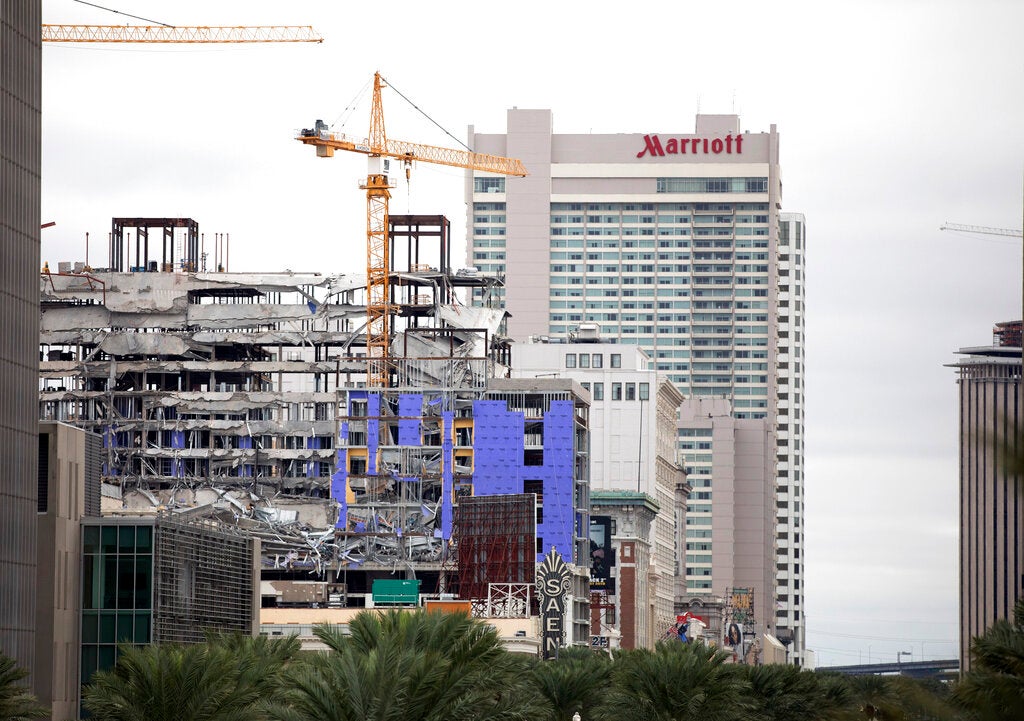 Debris hangs on the side of the building after a large portion of a hotel under construction suddenly collapsed in New Orleans on Saturday. (The Advocate via AP)

NEW ORLEANS — Rescue crews on Sunday searched for a worker missing in the partial collapse of a New Orleans hotel that was under construction, their work proceeding cautiously amid fears about the stability of the structure, authorities said.

Officials declined to say if they have any indication whether the missing worker is alive after Saturday’s collapse. New Orleans Fire Chief Tim McConnell said they are treating their work as a rescue mission until they have evidence the missing person is dead along with two other people killed when a large part of the Hard Rock Hotel project crashed down near the city’s historic French Quarter.

“Safety is the No. 1 thing. The last thing you want to do when you are trying to rescue somebody is lose someone else,” McConnell said at a news conference Sunday.

Several floors of the hotel toppled down Saturday amid blinding dust and flying debris. WWL-TV obtained a viewer’s dramatic video of upper floors collapsing Saturday before one side of the building crashed to the street.

New Orleans Mayor LaToya Cantrell told media outlets later Sunday that the body of one of the two dead has been recovered and the coroner’s office is working to identify the victim.

Thirty people were injured. Only one remains in the hospital. The mayor visited the man, who had surgery for a leg injury.

“He told me it could have been worse. He wanted to make sure his co-workers were safe. He was envisioning the two who were on the floor with him,” Cantrell said.

Crews on Sunday were assembling a 220,000-pound (99,800-kilogram) crane driven into the city overnight to begin the delicate process of removing the large amount of fallen debris, McConnell said.

“Our original estimate to get a crane was two weeks. We got it here in less than 24 hours,” McConnell said.

The project’s contractor, Citadel Builders LLC, was flying in engineers from Europe to help crews remove debris without risking the life of the missing person or nearby buildings and aid in the investigation, officials said.

Neither Citadel Builders nor emergency officials have commented on any potential cause of the building collapse.

The new Hard Rock Hotel was under construction at the corner of Rampart Street and Canal Street, a broad boulevard just outside the French Quarter that is lined with restaurants hotels and retailers. Canal, which carries six lanes of traffic divided by a wide median where streetcars roll, separates the Quarter from the city’s main business district.

Officials warned massive disruptions in the area will likely last for weeks. Reports said about 100 residents in the mandatory evacuation zone have been displaced from their homes. And some debris from the building fell on the roof of the Saenger Theatre. Cantrell said the exact damage to the theater has not been determined, but productions of “Wicked” have been canceled through the end of its run next weekend. She urged patience because it could take weeks or even months to clean up the area.

“This structure is not stable. We want people to stay away from the area. How we touch it — it just matters,” the mayor said.