2nd bamboo organ in PH being built in Pampanga town 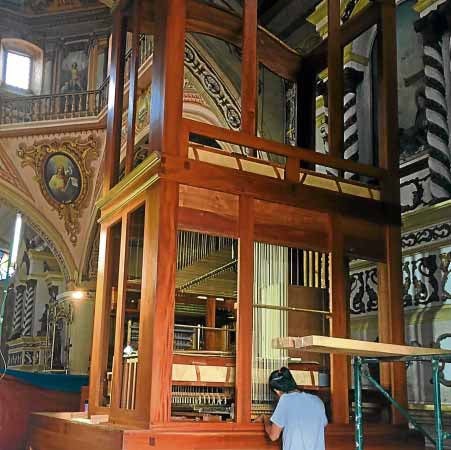 LITURGICAL MUSIC The bamboo organ at St. James the Apostle Parish Church in Betis, Pampanga, will be played for the public for the first time on Dec. 15, the eve of the nine-day Christmas dawn Masses. —TONETTE OREJAS

GUAGUA, Pampanga, Philipppines — The Philippines’ second bamboo organ is being built at St. James the Apostle Parish Church in Betis, Pampanga province, and will be ready to play liturgical music well before the 500th anniversary of the Christianization of the country in 2021.

When it is finished in late November, it will stand 4.6 meters tall and 2.4 m wide.

The bamboo poles, which will serve as pipes for the organ, are locally sourced and have received modern preservation treatment so they will last a long time, Tagle said.

Cera is said to have buried the bamboo used in the first organ in sand for six months, an old method of preservation.

Tagle, 47, has made organs in other countries. Belgian missionaries had sent him to Austria on a scholarship to learn organ building.

Diego Cera Organbuilders Inc., established in 1994, has maintained all pipe organs in the country, including the one in the Manila Cathedral.

The pipes had yet to be installed when the Inquirer visited for a look at the work in progress at St. James the Apostle on Saturday.

The bamboo organ is being put together at the side altar of the church, which has been declared a national cultural treasure.

When done, the organ will be 70 percent bamboo.

Unique among 91 churches in Pampanga province, the Betis church boasts of images painted on the ceiling, walls and doors, which many describe as “Cathecism in visuals.”

“It will refine our music,” said Msgr. Greg Canlas, the 77-year-old musical director of the Betis-based Mirabilia Dei Foundation Inc. (MDFI), which is undertaking the project.

The MDFI’s apostolate is to “deepen the faith in God through liturgical music,” said the group’s founder, Consuelo Jose-Mendoza, 87.

Founded as the Betis children’s choir in 1955, it was renamed Mirabilia Dei (God’s miracles) in 2006 because children’s voices were “awesome, like God,” Canlas said.

The organ costs more than P3 million, which was raised over four years by the trustees and sponsors through musical concerts.

It is the Betis Church’s first major acquisition in decades.

Miguela Santiago donated all her birthday gifts to MDFI. In 2017, she exhibited paintings for sale to bankroll the project.

The bamboo organ will be played for the public for the first time on Dec. 15, the eve of the nine-day Christmas dawn Masses.

Canlas said having the bamboo organ was like welcoming back Padre Cera, who was parish priest of Mabalacat in northern Pampanga from 1794 to 1797.

Betis was a Muslim settlement downstream of the Pampanga River before Augustinian missionaries converted it into a Catholic community in 1572.

Many priests come from this community.