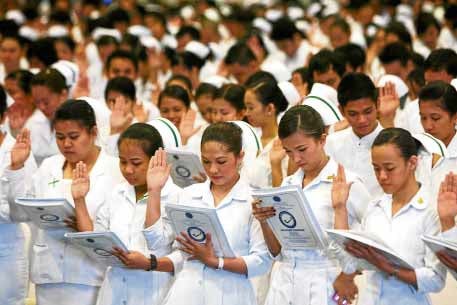 NURSES’ PLIGHT Nursing graduates take their oath as new professional nurses. Most nurtured hopes of high pay in the profession when they took up the course. —INQUIRER FILE PHOTO

MANILA, Philippines — For more than a decade, Bryan, a nurse, had been taking care of patients who had the means to be confined almost indefinitely in a private hospital.

But when members of his family fell ill, Bryan was hard-pressed to find ways of paying for their hospitalization.

In fact, he is tied for the next two years to the Manila hospital he is working for as he pays in installment the remaining P50,000 bill for one of his two children who is coping with a kidney illness.

With just a monthly income of a little over P21,000, Bryan said he couldn’t afford to have any of his family of four get sick.

“We’re lucky that one of our benefits is that when someone in the family gets sick, we are able to set the payment terms in the hospital. Without that, getting sick would really be a burden. This wasn’t what I envisioned when I took up nursing, when there was a promise of high pay [in the profession],” said the 33-year-old.

Just a few years ago, Bryan had to ask two of his younger siblings to pool their money for the medical costs of their mother who twice suffered a stroke.

This is why he is pinning his hopes on President Duterte’s prioritizing the Makabayan bloc’s House Bill No. 3478, which sets a minimum monthly salary of P30,000 for nurses in both public and private hospitals.

The bill runs in line with the Supreme Court ruling last week, which affirmed that government nurses are entitled to a monthly pay of up to P30,000, or about the maximum pay of Salary Grade 15, according to the Philippine Nursing Act of 2002 (Republic Act No. 9173).

Another lawmaker, Sen. Cynthia Villar, said in a radio interview on Sunday that the Department of Health (DOH), in accordance with the Supreme Court ruling, could tap its “unprogrammed accounts” for the mandated pay for government nurses.

When Bryan started his career in 2009, he had a monthly salary of P8,000. Of the original 40 in his group, only two opted to stay in the hospital where they started.

To his knowledge, the minimum pay now at that hospital is around P12,000, just a little above the minimum wage of P11,814.

Should the minimum pay be raised to P30,000, he said that this may somehow encourage nurses to stay on, as low pay had been one of the reasons why they sought work opportunities abroad.

The rates are competitive in Southeast Asia alone. Thailand pays its nurses a minimum P55,930. The starting salary in Malaysia is P82,000. Singapore offers its nurses nearly P112,000.

Bryan said that even with the prospect of higher pay, he already gave up his goal of going abroad since in the two instances he did so, “something bad happens.” Case in point was his mother’s stroke.

He would have wanted to work in a government hospital, where he said the pay was a little better. But landing a permanent post wasn’t easy if you didn’t have the right connections.

According to Joy, a nurse in Bicol, “It’s really hard to get a permanent position, especially if you don’t know anybody from the inside.”

“One time, there was [an applicant] who only had a year of experience, yet was given a permanent position even if there were [others with more experience],” she said.

Joy accepted a job order, as the work offer is called, at a tertiary government hospital for a year, even if the monthly salary was only P8,000 — barely half of the lowest possible mandated salary for nurses of P19,845 — because her previous employer, a private hospital, paid her only about P6,000.

Nurses’ organization Filipino Nurses United said there should be a “renationalization” of health services, especially since the current devolved system had already led to the “politicization of health.”

Even Health Secretary Francisco Duque III supports calls for renationalization, after medical practitioners have observed over the years how health programs and services become “compromised” when local officials do not give them priority.

Under RA 7160, the Local Government Code (LGC), the delivery and promotion of health services are devolved to provincial and local officials.

“We need to review the Local Government Code and see what its impacts are after [28] years. We need to do an assessment. Did it do good in the health outcomes of our people?” Duque said.

Duque pointed out that if education wasn’t devolved to the local governments, the more health services should not be.

He said there could be better management of health centers, especially when it comes to immunization, if health services were the responsibility of the national government.

“Because right now if you would meddle, you would be told that it’s no longer your jurisdiction,” the health chief said.

In a devolved public health care system, the DOH procures medicines and vaccines, but local officials are the ones responsible for distribution of these to the people.

Devolution should’ve also resulted in better delivery of primary health care as local governments can tailor-fit their programs to the needs of the community.

But this has not been the case over the last two decades due to priority and funding problems.

This was the gap that Duque said the Universal Health Care (UHC) Act sought to close by introducing the health care provider network system.

Yet in the UHC’s implementing rules and regulations, municipal and component cities still “retain their existing functions over their respective health facilities and personnel,” as provided by the LGC.

What this means is that the provincial health board that will be created for the UHC will only have “supervision, not control” over health facilities, services and personnel.

Local officials can also opt not to pool their resources to the special health fund for the province. But if they decide so, they would also be “required to provide counterpart funding” for their area.

For now, nurses like Bryan and Joy hope that as the government aims to provide better health services to the public, it wouldn’t forget to look after the welfare of the people who are delivering these programs.

“We should also be given priority. Right now, it feels like we are not being given importance even if we’re the front-liners. They have a lot of budget for the things they want, so it’s impossible that they don’t have the funds for us,” Bryan said. —WITH A REPORT FROM MARLON RAMOS