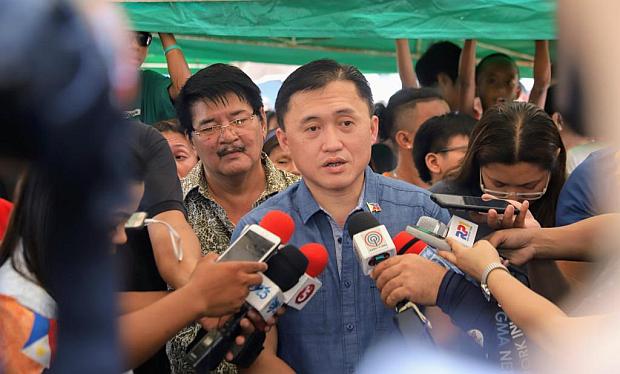 Sen. Christopher Lawrence Go talks with reporters as he visit fire victims in Metro Manila on Friday, Oct. 11, 2019. (Photo from his office)

Sen. Christopher Lawrence “Bong” Go revealed this on Friday, Oct. 11, as he was visiting fire victims Barangay 779 in Santa Ana in Manila. He would also visit Barangay BF International in Las Piñas on the same day to check on the needs of other fire victims there.

During his visit to Santa Ana, where 20 houses were destroyed by fire, Go provided relief and financial assistance and medical assistance to residents.

He also said that he would provide school supplies and uniforms to affected children so they could immediately go back to school.

Go was accompanied by representatives from the Department of Trade and Industry (DTI), Presidential Commission for the Urban Poor (PCUP), National Housing Authority (NHA) and the Department of Social Welfare and Development (DSWD) to provide additional assistance to the residents.

Meanwhile, in an ambush interview, Go was asked by members of the press if he had already talked to President Rodrigo Duterte about last Wednesday’s Senate hearing on the so-called ninja cops controversy.

He said that the President was reviewing the issue himself and was also eager to know the truth.

[As of now, an investigation is already being conducted by the Deparment of Jusitce and the Department of the Interior and Local Government. President Duterte may talk to DILG Secretary Eduardo Año this afternoon. It’s one of the things they will talk about.]

[Let’s look at the evidence. The President himself is interested and he’s been reading all the resolutions and the timeline of what happened in 2013. He knows that the people are waiting also interested to know the truth.]

“Ang Pangulo, hindi basta basta naniniwala. He wants to be fair to everybody,” Go went on.

[The President just doesn’t immediately believes in something. He wants to be fair to everybody.]

[Whoever is involved and there’s evidence, let it come out. If he needs to be dismissed, then dismiss him. The retirement of General Albayalde is getting near. As a member of the blue ribbon committee in the Senate, I’m also interested in knowing the truth.]

[The President and I still give our full support to our police officers. The honest police officers should not be implicated in an incident that was done by a handful of rotten officers.]

Still, he said, the internal cleansing within the PNP should continue.

[We will assist in all cases, as long as they are duty-connected. These cases are disadvantageous to police officers who really like to work. Let us continue the internal cleansing of the PNP.]

[We now trust the police. Twenty years ago, we were afraid of checkpoints. Let’s weed out the rotten ones. There are only a few of them. There are more good officers.]

Asked for his suggestion on who must lead the PNP after Albayalde, Go said that such prerogative lies with the President.

[I won’t make a suggestion. That’s the prerogative of the President. Trust and confidence are important. Whoever can unite and clean up the PNP should be chosen.]

Meanwhile, on the question of possible solutions for the transportation problems in Metro Manila, Go said that the construction of new transportation infrastructure and the development of new cities could diminish the problem.

[The government is already doing something in infrastructure in New Clark City. There’s a new airport being built in Bulacan. I believe these projects could help decongest Metro Manila.]

Asked if the President was still open to the idea of invoking emergency powers to resolve traffic problems in Metro Manila, Go said that it might be a case of “too little too late.”

[No more. In two and a half years, it will be hard to find solutions. The powers should have been given in 2016. Maybe much more could have been done.]

On the issues concerning the New Bilibid Prison, Go said that he was in favor of adding more correctional facilities.

[Yes, I’m in favor of adding more prison facilities. In fact, there’s a bill in Senate that will mandate the creation of a separate facility for heinous crime convicts.]

He was referring to Senate Bill No. 1055 — An Act Establishing a Separate Facility for Prisoners Convicted of Heinous Crimes, which seeks to create maximum penal facilities in secured and remote locations to ensure that unwarranted outside contact will be prevented.

[It’s up to you, incorrigible prisoners. Be good in prison. At least, you’re alive there and the food is free.]