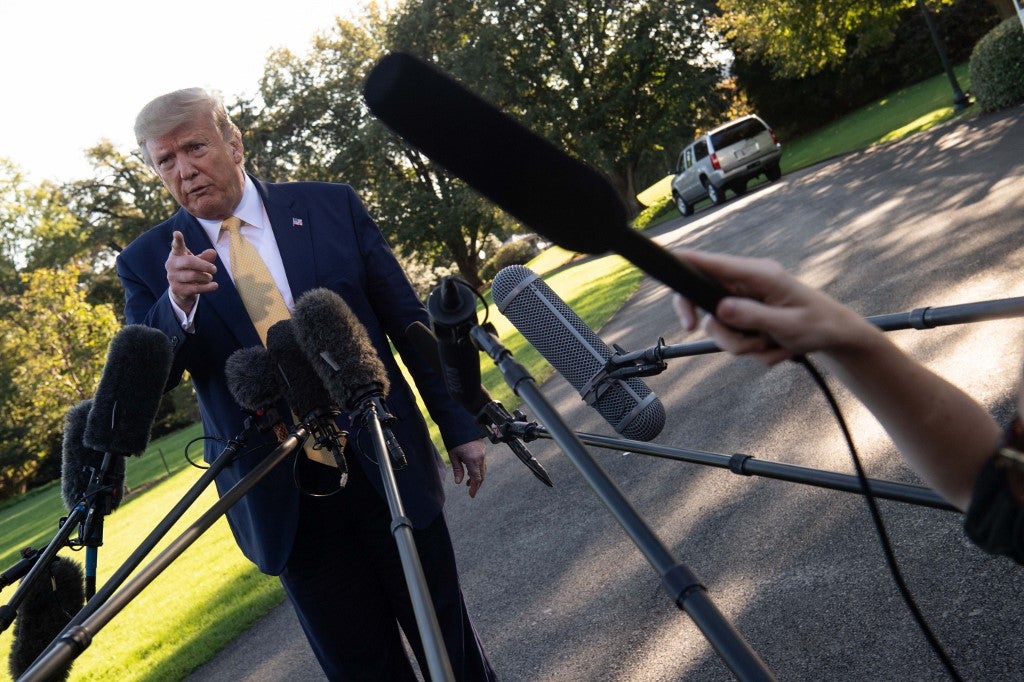 US President Donald Trump speaks to the press from the South Lawn of the White House after announcing an initial deal with China in Washington, DC, prior to departing to Lake Charles, Louisiana to hold a campaign rally on October 11, 2019. (Photo by NICHOLAS KAMM / AFP)

BEIJING, China — A partial US-China deal may only offer a temporary tariff reprieve because it lacks specifics and leaves the thorny issues for later, analysts said, allowing both economic powers to claim success.

Engulfed in an impeachment inquiry, US President Donald Trump heralded the deal as a major breakthrough.

But it will take weeks to finalise and the details are not clear — nor will it roll back tariffs already in place on hundreds of billions of dollars in two-way trade.

“The lack of specificity and even the fact this baby stepped agreement could take weeks to iron out, quickly cooled trader optimism,” said Axi Trader analyst Stephen Innes.

After earlier attempts at a truce between Trump and his Chinese counterpart Xi Jinping did not pan out businesses remained cautious, Innes said.

There is “fear this could be more of the same old lather rinse and repeat trade detente followed by trade escalation,” he said.

For now, Washington will hold off on a massive tariff increase planned for next week and — as negotiations progress — new December tariffs could also be cancelled, US officials said.

Trump said China had pledged to rapidly increase purchases of American farm products to $40-50 billion — a stunning feat, and more than double 2017 levels.

But China is yet to confirm these details.

“The two sides also discussed arrangements for future consultations,” Liu said when he met Trump Friday, according to Xinhua.

Previously, Trump has blamed China for backtracking on its promises.

On Friday, the US president played up the “substantial phase one” deal as a result of his hard-line stance with China.

“It’s not much and it doesn’t get us very far in the big issues, so whether it will lead to anything important is still very unclear,” said Barry Naughton, an expert on China’s economy at the University of California, San Diego.

The Chinese Communist Party mouthpiece People’s Daily warned in an editorial Saturday the trade war would only be resolved by “abolishing all tariffs.”

But to get there, the two sides need to address issues such as scaling back Chinese government subsidies that have skewed competition, and opening up sectors dominated by state-owned enterprises (SOEs).

In a step towards that, China recently announced a timetable to remove foreign ownership limits in finance companies beginning next year.

But “a significant improvement is… not very likely,” said Song Houze, a research fellow at The Paulson Institute.

“The existence of thorny issues like SOE and tech make a major deal unlikely, which means the existing tariff will most likely stay.”

The latest truce, however, was essential for both sides as both face cooling domestic growth, he said.

US restrictions on Chinese investments in its high-tech sectors — blocking Huawei from government contracts — and sanctions on a series of China’s tech giants have also cast a shadow on trade negotiations.

The US commerce department said last week it will blacklist 28 Chinese entities it says are implicated in rights violations and abuses in China’s Xinjiang region.

“Even if the US and China reach a comprehensive trade deal, the US will likely tighten restrictions on China’s access to technology in the coming years,” said Wang Tao, head of Asia economics at UBS Investment Bank.

“The US has elevated this issue to national security and it may be hard to reverse, no matter what kind of agreement they reach (or not) on Huawei,” said Wang Tao, head of Asia economics at UBS Investment Bank.