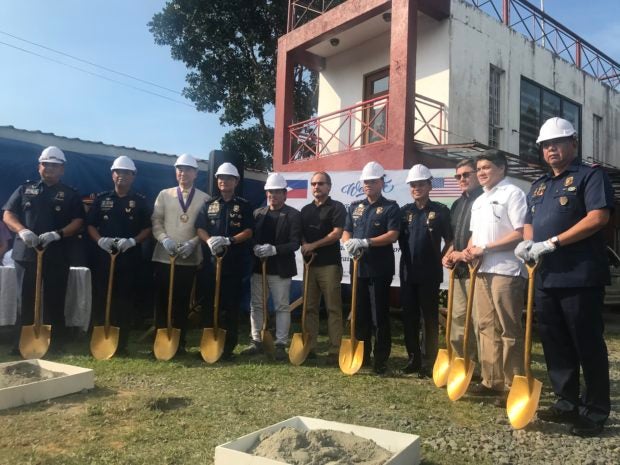 US Ambassador to the Philippines Sung Kim (third from the left) and PNP chief Gen. Oscar Albayalde (fourth from the left) lead groundbreaking ceremony for the first counterterrorism training center in Southeast Asia on Friday, October 11, 2019, at Camp Gen. Mariano Castañeda in Silang, Cavite. (Photo by Cathrine Gonzales / INQUIRER.net)

SILANG, Cavite — The first counterterrorism training center in Southeast Asia, which will be funded by the United States, will soon rise at Camp General Mariano Castañeda in Silang town, Cavite province.

The center will focus on strengthening US and Philippine commitment against terrorism.

Albayalde said the PNP is grateful to the US government for allotting a total of P520 million to establish and jointly operate the center, which is designed to boost counterterrorism capabilities of police forces in the Asia Pacific region.

Some P350 million of the US allocation is for the main facility, while the balance would be for maintenance and operations.

Albayalde said the US government “is always ready” to help the PNP in fighting terror.

Albayalde said the training program that would be the center’s feature would boost efforts to fight both domestic and transnational terrorism.

On August 15, the PNP and the US Embassy signed a memorandum of understanding to establish the training center in the Philippines, which is set to be completed by the end of 2021.

Kim described the training facility as a “very special accomplishment” for the US government and the PNP.

The ambassador said being the only one in the Pacific region, the training center would show the Philippines’ “regional leadership” in the fight against terror.

The project, according to Kim, “reflects the enduring US commitment to support the Philippines’ counterterrorism efforts.”

It also showed US commitment to work with regional partners to “address threats to peace and security in the whole region,” Kim said./TSB