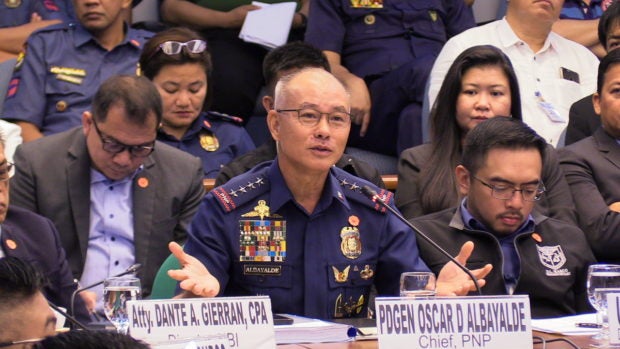 SILANG, Cavite, Philippines — Despite being in the midst of being embroiled in the issues of “ninja cops,” Philippine National Police (PNP) chief Gen. Oscar Albayalde seems set to finish his term.

Albayalde said he spoke with Interior Secretary Eduardo Año, who told him that he will be made to finish his stint as the head of the 190,000-strong police force even as the Department of the Interior and Local Government (DILG), which has jurisdiction over the PNP, is still conducting its investigation into the alleged drug recycling in Pampanga in 2013.

Albayalde served as Pampanga police director during the time the questionable illegal drug operation was conducted.

“Secretary Año and I have talked and according to him, I will finish my term. Sabi naman niya [He has said] I will be made to finish my term,” he said in an interview with reporters shortly after the groundbreaking ceremony for the construction of the Regional Counter Terrorism Training Center at Camp Castañeda which was sponsored by the United States government.

“Depende, hindi pa naman kasi natin alam din talaga pero ‘yun ang so far ang sabi niya (Año) sa akin (It depends, since we still do not know what will happen but so far, that’s what he told me),” he added.

Albayalde, likewise, denied submitting a resignation letter to Año as the inquiry heats up concerning the anti-drug operation in Pampanga.

Albayalde is set to retire from the PNP on November 8 but the change-of-command ceremony for his successor will be held on October 29.

He said the date has been scheduled earlier since President Rodrigo Duterte, who will preside the ceremony, is set to leave for the Association of Southeast Asian Nations (Asean) Summit in Bangkok, Thailand.

Duterte had earlier ordered Año to conduct an investigation on Albayalde and the so-called “ninja cops” or police officers involved in the drug recycling racket.

The President said he would let the Senate finish its investigation into the issue and wait for the results of the investigation of the DILG before deciding what to do with the PNP chief.

Albayalde, meanwhile, said he would wait for the decision of Duterte before taking action on his post, and that he has left his “fate” as top cop to the Chief Executive. /jpv/muf