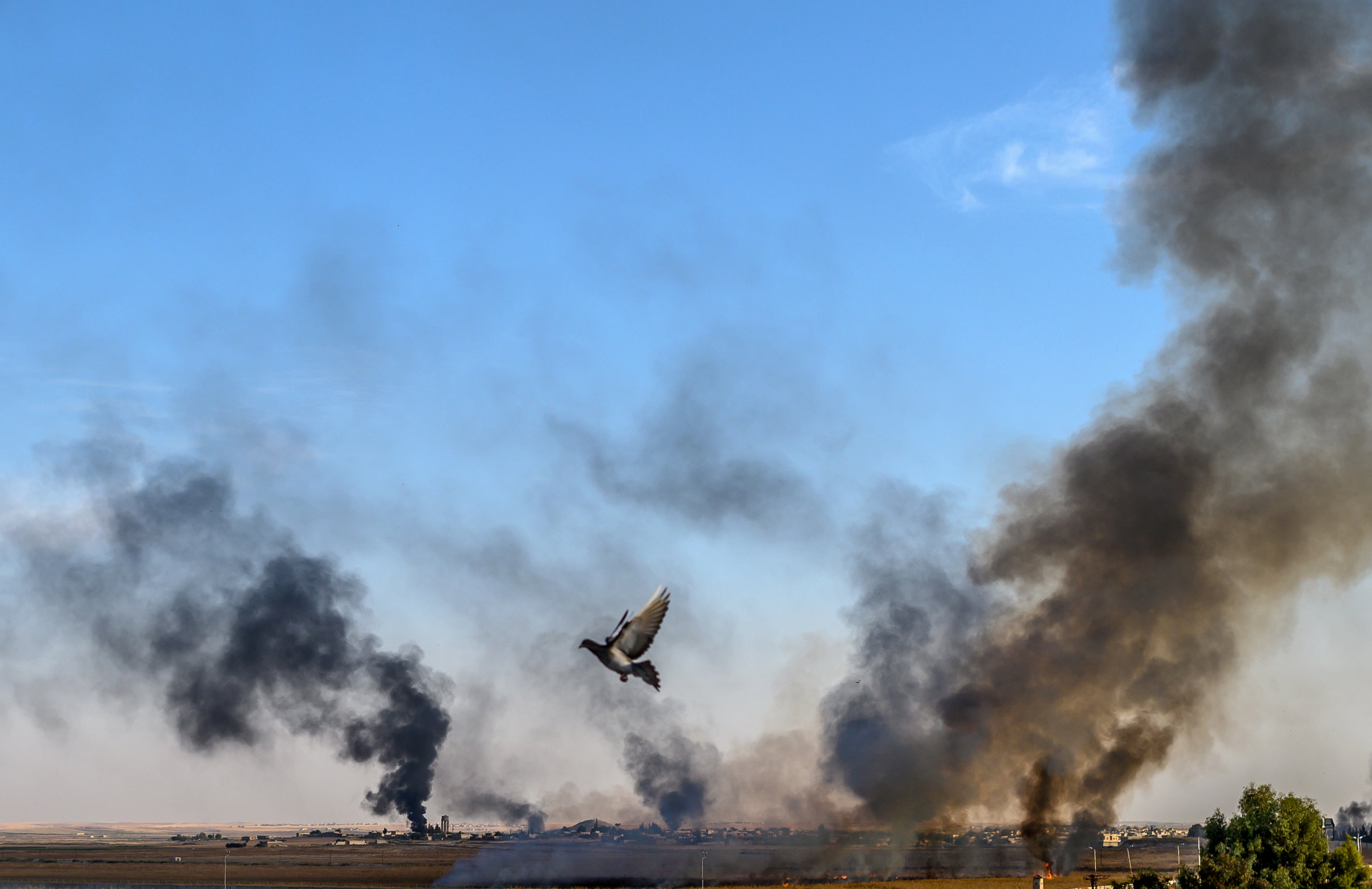 Smoke rises from the Syrian town of Tal Abyad, in a picture taken from the Turkish side of the border where a pigeon is seen in Akcakale on October 10, 2019, on the second day of Turkey’s military operation against Kurdish forces. – Turkey has vowed to destroy the Syrian Kurdish People’s Protection Units (YPG) which controls much of northeastern Syria, and set up a “safe zone” for the return of Syrian refugees. A total of 70 people were so far reported injured across Turkish areas. Families were evacuating and streets emptying in Akcakale, as local authorities called on people to take shelter. (Photo by BULENT KILIC / AFP)

TALL TAMR, Syria — Thousands of civilians fled air strikes and shelling as Syria’s Kurds battled to hold off a Turkish invasion on Thursday, with fears mounting of a developing humanitarian crisis.

US President Donald Trump tried to justify the de facto green light he gave his Turkish counterpart Recep Tayyip Erdogan for an assault seen as a blatant betrayal of Washington’s erstwhile Kurdish allies.

Later Trump suggested that Washington could mediate between Turkey and Kurdish groups and a US official said Trump has asked American diplomats to broker a ceasefire.

But international condemnation of the Turkish assault was overwhelming and the response to the operation was discussed in an emergency meeting of the UN Security Council.

French Foreign Minister Jean-Yves Le Drian called for an emergency meeting of the US-led coalition against the Islamic State (IS) group.

Syrian Kurdish forces lost 11,000 personnel and played a major role in the years-long battle to eliminate the “caliphate” IS had set up in the region.

In scenes all too familiar since the start of Syria’s war in March 2011, civilians were seen abandoning their homes Thursday, in vehicles or on foot with their belongings on their backs.

The UN’s Office for the Coordination of Humanitarian Affairs on Thursday estimated that 70,000 people have been newly displaced since Ankara launched its operation.

“We’re heading to the countryside because we’re scared of renewed bombing and intensified clashes,” said Rizan Mohammad, 33, who fled the Kurdish-majority city of Qamishli with his family.

After launching the assault with air strikes and intense artillery fire on Wednesday, the Turkish army and its Syrian proxies crossed the border into Kurdish-controlled areas.

On Thursday, Turkish jets carried out fresh strikes, the Syrian Observatory for Human Rights and a Kurdish military official said.

Fighting broke out in several locations along the roughly 120 kilometer (75 mile) wide front where operations are focused, they said.

Turkish forces and allied rebels captured 11 villages in the area, the Observatory said.

Fighting mostly centered around Tal Abyad — one of the main Kurdish-controlled towns in the area coveted by Ankara.

Clashes also raged around Ras al-Ain further west, the other main town in the zone that Turkish media reports say is the first goal of the offensive.

The Britain-based Observatory, which relies on a network of sources in Syria, said at least 29 fighters and 10 civilians have been killed since the start of the assault.

Turkey, which staged two previous offensives into Syria since the start of the conflict, relies heavily on Syrian proxy fighters, many of whom once battled President Bashar al-Assad’s troops.

Erdogan wants a buffer zone to which he can send back some of the 3.6 million Syrian refugees his country hosts.

On Thursday he warned the European Union that the alternative was to allow the refugees to head to its shores instead.

“If you try to frame our operation there as an invasion… we will open the doors and send 3.6 million migrants to you,” Erdogan said.

Fourteen humanitarian organizations, including the Norwegian Refugee Council and Mercy Corps, warned that hundreds of thousands of people were in danger.

“An estimated 450,000 people live within five kilometers of the Syria-Turkey border and are at risk if all sides do not exercise maximum restraint and prioritize the protection of civilians,” a joint statement said.

The SDF, which have little armour and no air force, are unlikely to hold out very long against Turkish firepower in the flat and open terrain they are defending.

“The question that remains is how far can Turkey advance before international or regional actors, stop it,” said Nick Heras, an analyst at the Center for a New American Security.

The assault appeared almost inevitable after Trump announced Sunday that US troops deployed in the area were pulling back from the border.

The withdrawal was implemented the next day, effectively clearing the way for Turkey’s offensive.

Trump on Thursday suggested Washington could mediate between Turkey and the Kurds.

“We have been tasked by the president to try to see if there are areas of commonality between the two sides (and if) there’s a way that we can find our way to a ceasefire,” a US official said on condition of anonymity.

One of the Kurds’ last hopes is that the prospect of IS prisoners breaking out and regrouping with increasingly active sleeper cells will spur the world into action.

About 12,000 men linked to IS are held in seven detention centers across northeast Syria, according to the Kurds.

On Thursday, the Kurdish administration said a prison housing IS fighters in the region under its control was hit by Turkish bombardment.  /muf

Your subscription could not be saved. Please try again.
Your subscription has been successful.
Read Next
Manila Water: Cost to build wastewater facilities won’t be charged to consumers
EDITORS' PICK
ACT slams Edca on 124th anniversary of PH-American war: ‘Tila hindi umalis ang mananakop’
Philippines central bank to focus on inflation at next policy meeting – governor
Only 38% of students grade 1 to 3 prefer local language as medium of instruction — Pulse Asia
House energy committee chair Arroyo bats for cheap electricity
Omega Speedmaster super racing: Tiny device massive change
vivo Philippines offers a free bouquet of flowers and a premium necklace perfect for Valentine’s Day
MOST READ
Pokwang admits she lied about cause of split with Lee O’Brian: ‘Umasa akong aayusin pa niya’
Vice Ganda asserts all is well with Karylle, takes swipe at ‘kuya’ who chimed in to be ‘trending’
Immigration detention head, 35 others sacked over foreign detainees’ VIP treatment
OWWA chief Arnell Ignacio: Socmed manager behind post on my love life
Don't miss out on the latest news and information.