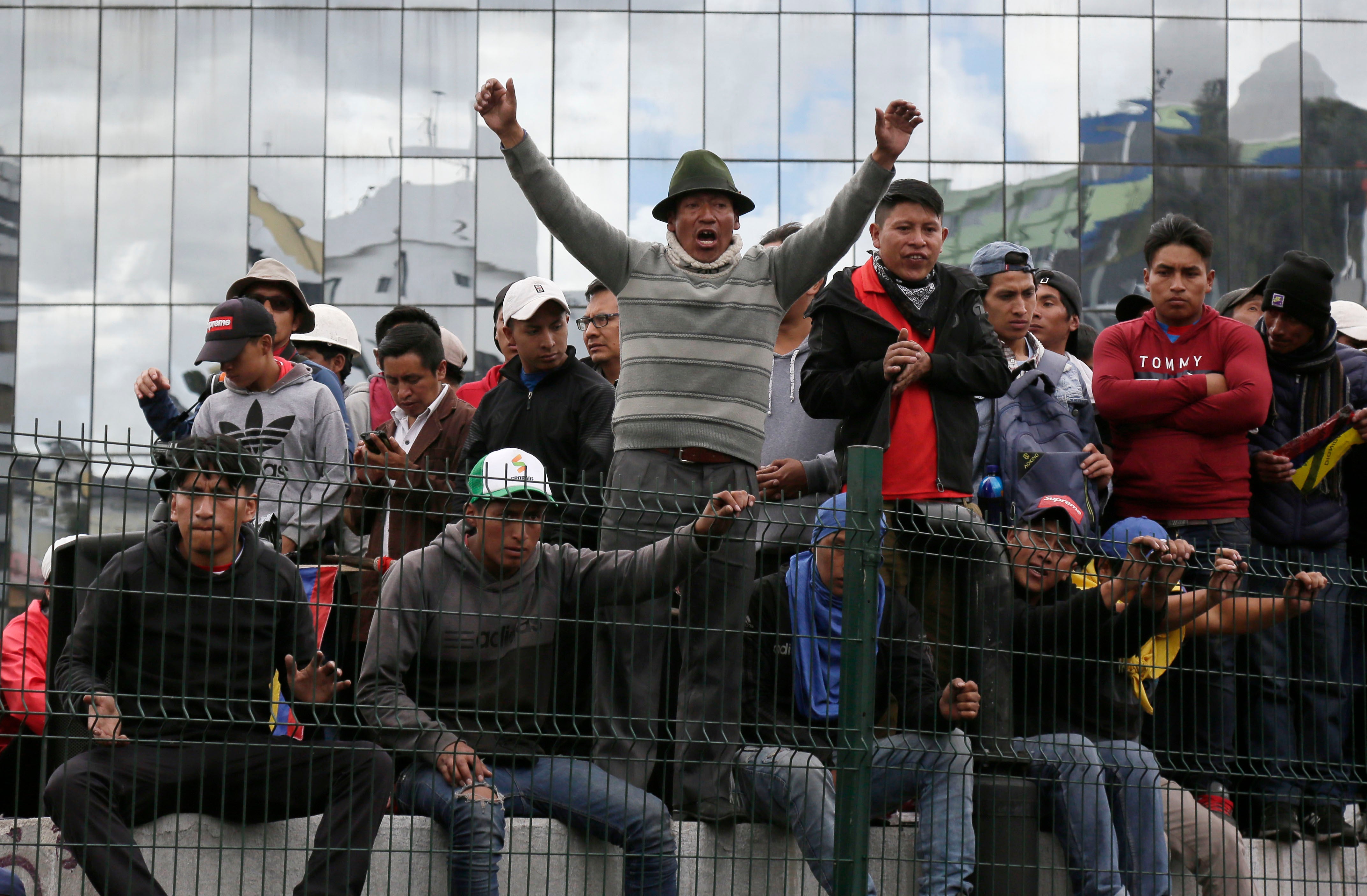 QUITO, Ecuador  — Anti-government protesters forced captive police officers to carry a coffin containing the body of an indigenous activist, underlining the anger directed at Ecuador’s government more than week after rises in fuel prices set off nationwide unrest among indigenous groups, unions and others.

Thursday’s memorial service for an indigenous man said to have been killed during the clashes happened in the capital of Quito, the focus of protests that have plunged President Lenín Moreno’s government into crisis and laid bare Ecuador’s political and social rifts.

“The future is very dark,” said economic analyst Fernando Martin. “I hope both sides realize that what they’re doing is hurting themselves and the country. This isn’t good for Ecuador.”

Big jumps in the costs of gasoline and diesel after Moreno ended subsidies last week set off the upheaval, but other complaints have come out amid the protests, looting, vandalism, clashes with security forces, the blocking of highways and disruptions of Ecuador’s vital oil industry.

Moreno does not appear to be in immediate danger of being ousted, but his political stature is badly shaken. While he has maintained support of the military and other state institutions, his decision to move government operations from Quito to the port of Guayaquil after the turmoil erupted highlighted an image of an administration under siege.

Crucially, Moreno has received statements of support from the Organization of American States and individual Latin American countries that emphasize he took office as Ecuador’s constitutionally elected president in 2017.

Still, the government seems to have been taken aback by the ferocity of the unrest, a miscalculation that undermined its credibility among indigenous groups and others who have long felt marginalized in this nation of 17 million people.

Indigenous protesters are playing a key role in the confrontation with the government, as they have in the past due to their traditional grievances as a minority.

“There’s a lot of uncertainty about what might happen,” said Michael Shifter, president of the Inter-American Dialogue, a U.S.-based research group.

He contrasted Moreno’s decision to cut subsidies while trying to reduce the government’s big debt with the more free-spending policies of his leftist predecessor and former ally, Rafael Correa.  “The big lesson is that it’s very difficult to go from populism to a more orthodox economic policy,” Shifter said.

He also drew a parallel with Argentina, where conservative President Mauricio Macri has faced a backlash for trying to impose fiscal discipline as the country struggles with low growth, rising poverty and austerity measures after leftist administrations.

An indigenous leader and four other people have died in Ecuador’s violence since last week, according to the public defender’s office, which monitors human rights. It identified the leader as Inocencio Tucumbi of the Cotopaxi region.

Police officers were forced to carry the coffin of an indigenous activist during a memorial service at a Quito cultural center being used by indigenous protesters as a base. Earlier, one of eight captive officers was forced to drape a national flag on his shoulders and wear a hat used by some indigenous people. The lone female officer in the group was seen wiping away tears.

All were forced to remove their boots in front of hundreds of demonstrators, some of whom held white roses in tribute to people who have been killed in the unrest. The officers appeared to be unharmed, and were released late Thursday.

“With the blood of our brothers, we won’t negotiate,” indigenous leader Jaime Vargas declared in a speech.

He accused the government, which has floated agricultural aid and other incentives for indigenous groups as a way to resolve the crisis, of deceiving and neglecting Ecuador’s poor.

José Briones, secretary general of the president’s office, said protesters must release all people “kidnapped” before any dialogue with the government can proceed.

Briones also said order was being restored nationwide and that more than 70% of Ecuador’s cities were peaceful.

Protesters temporarily blocked roads in several parts of Quito on Thursday, but traffic was flowing in many areas following clashes around the capital’s historic center a day earlier.

Ecuador’s cuts in fuel subsidies were among measures announced amid a $4.2 billion credit plan with the International Monetary Fund, which says the funds will strengthen the economy and generate jobs.

Moreno has accused the former president, Correa, of plotting a coup against him with the help of Venezuelan President Nicolás Maduro. Both men say the accusation is absurd.

On Thursday, Correa called for early elections to solve the crisis in Ecuador. He spoke during an interview with The Associated Press in Belgium, where he has lived since leaving office in 2017.

He faces an Ecuadorian arrest warrant for alleged corruption that he says is politically motivated. /muf