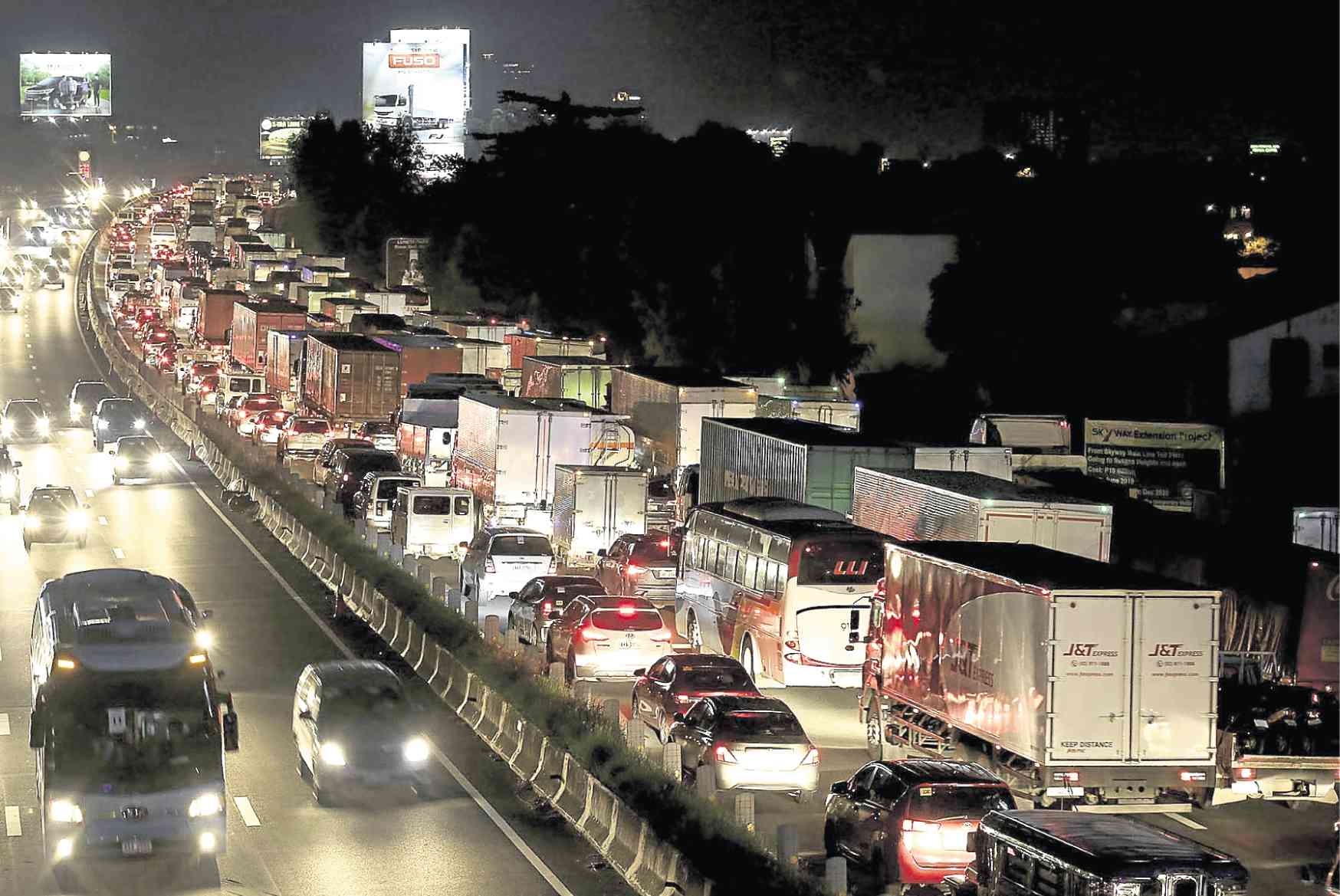 SUPERGRIDLOCK Heavy vehicular traffic stretching to 24 kilometers hounded motorists on the night of Sept. 26 on the South Luzon Expressway, from Alabang to the Eton exit in Sta. Rosa City in Laguna province. —RICHARD A. REYES

Every day, five days a week, I travel from Cavite province to Makati City for work. That is 38 to 45 kilometers one way, depending on what route I take.

South Luzon Expressway (SLEx) via Carmona is my preferred route. For three years, this has allowed me the fastest travel time for the total distance of 45 km despite the toll of P158 if I take SLEx at-grade or P204 via Skyway.

Despite the distance and higher cost, my travel time is more predictable. I avoid PUV drivers stopping in the middle of the road to pick up passengers.

It usually takes an hour on a good day to reach my office, or an hour and a half on a regular day.

I have realized that apart from the costs of toll and gas, more time spent on the road is causing further stress and limiting quality time with my family.

Two weeks ago, I had to look for alternative routes as the third northbound lane after the Alabang viaduct was closed on Sept. 25 to give way to the construction of a 6-km extension of Skyway from Barangay Cupang to Susana Heights in Barangay Tunasan, Muntinlupa City.

Motorists were surprised by the closure and spent at least twice the time to traverse that stretch of SLEx.

At least an hour has been added to my travel time. Every morning, I refer to apps like Waze or Google Maps to have an idea of heavy traffic on SLEx or alternative roads to take to reach my office.

One option is to take Cavitex via Aguinaldo Highway, which means a shorter route by 7 km and a cheaper toll at P24.

I try to avoid Aguinaldo Highway, however, because of flooding and vehicular congestion. When it rains, a portion of the highway in Bacoor, Cavite, is flooded, forcing motorists to use only two of the four lanes.

My travel time is unpredictable using Aguinaldo Highway, which is also the main artery used by buses and jeepneys going to Metro Manila. One time, it took me more than three hours to get home.

On days that I don’t want to drive or can’t drive because of car number coding, I take a P2P bus, which is more comfortable and faster compared with regular buses. The bus doesn’t take Aguinaldo Highway but SLEx via MCX (Muntinlupa-Cavite Expressway).

But it comes with a price. The bus fare from my place to Gil Puyat Avenue in Pasay City is around P60. From Gil Puyat, I take a jeepney to my office.

P2P costs me P150 one way, but it’s not crowded and goes straight to Makati. From where I get off, I walk a few hundred meters to my office.

Now, I take Daang Hari and go straight to Alabang via Commerce Avenue in Filinvest City before entering Skyway on Zapote Road.

This allows me to avoid the construction and road closure just after the Alabang viaduct. Few more minutes are added to my travel time because I had to take secondary roads, but this is a better way to avoid getting stuck on the northbound lane of SLEx before the entry to Skyway.

In recent weeks, however, the route has gotten more congested, probably because more motorists are taking it.

Taking the P2P bus is not an option now. The route from MCX to Skyway is where construction is going on and will probably add more than an hour to my travel time.