Dormitorio family won’t stop until everyone behind attack on kin is punished
Philippine Daily Inquirer / 05:04 AM October 10, 2019 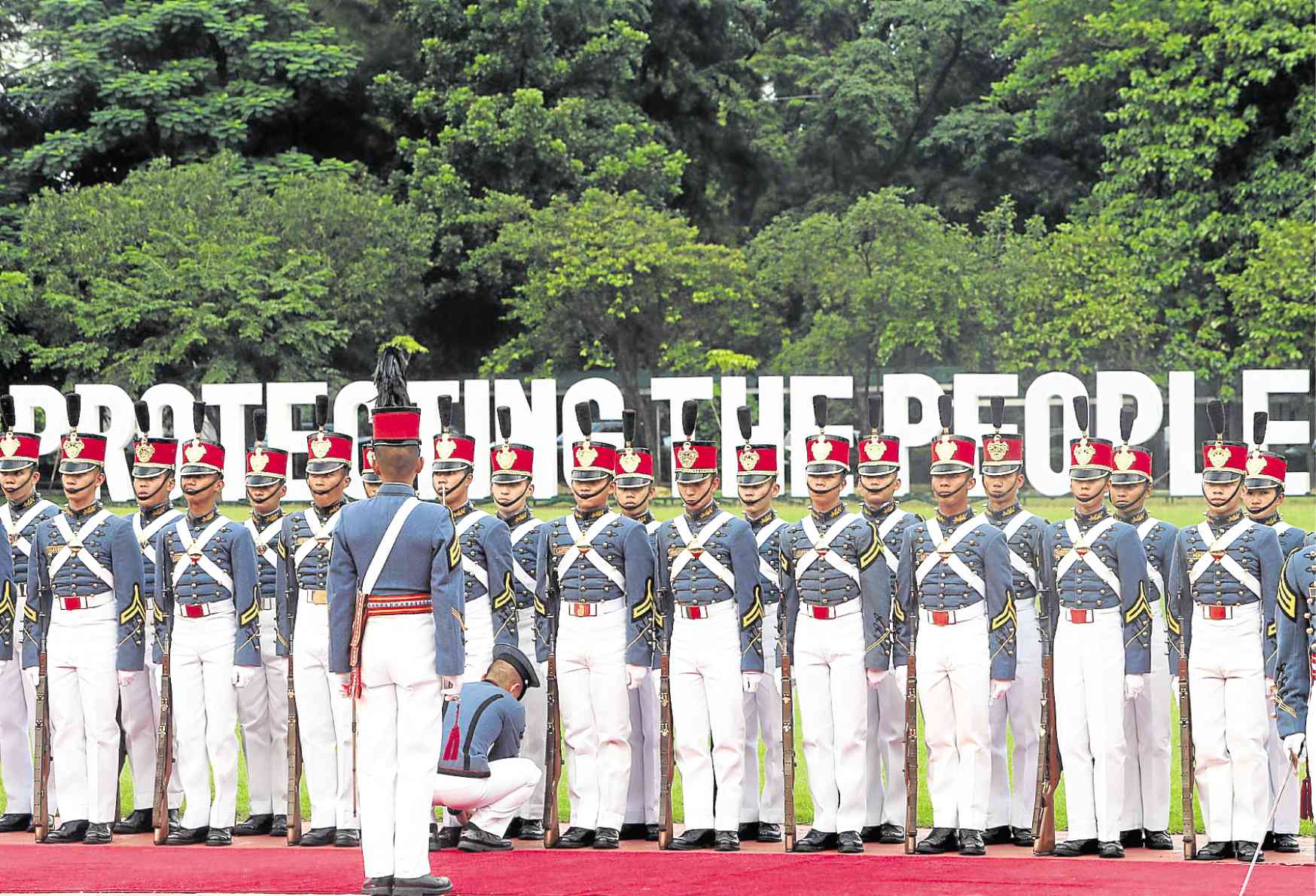 PROTECTORS OF THE PEOPLE The Armed Forces of the Philippines is instituting reforms to stop hazing at the Philippine Military Academy (PMA), where young men and women are molded to become protectors of the Filipino people.—EDWIN BACASMAS

The seven cadets faced charges of hazing and murder and for torturing Dormitorio, while the five PMA personnel were indicted for “dereliction of duty,” according to a 34-page criminal complaint filed by the plebe’s family in the Baguio prosecutor’s office on Tuesday.

Maj. Rex Bolo and Capt. Jeffrey Batistiana were the tactical officers supervising the cadets. The complaint said they were “responsible for the professional military training, character development, leadership and physical training of the cadets.”

Bolo, who heads the PMA Tactics Group, and Batistiana, who oversees the Echo Company, were relieved last month by Lt. Gen. Ronnie Evangelista shortly before he resigned as PMA superintendent, along with Brig. Gen. Bartolome Bacarro, the commandant of cadets, due to the Dormitorio hazing.

Evangelista and Bacarro said they stepped down for “command responsibility.”

The Dormitorio family told reporters here that it had yet to decide whether Evangelista and Bacarro should also be held liable for the plebe’s death.

The family and the police also charged Capt. Flor Apple Apostol and Capt. Maria Ofelia Beloy, doctors at the PMA hospital, with failing to detect and treat Dormitorio’s internal injuries that led to his death on Sept. 18.

Hospital records showed that Dormitorio had been treated at the hospital weeks before his death for contusions. The cadet was diagnosed with urinary tract infection when he was taken there after he complained of stomachache on Sept. 17.

The doctors allowed Dormitorio to return to his room, granting him a “sick in quarters” status. Many of the beatings suffered by Dormitorio occurred after he was discharged from the hospital, according to the police.

Lt. Col. Cesar Candelaria, commander of the PMA hospital, was also included in the complaint. He and Apostol were also relieved by Evangelista last month. 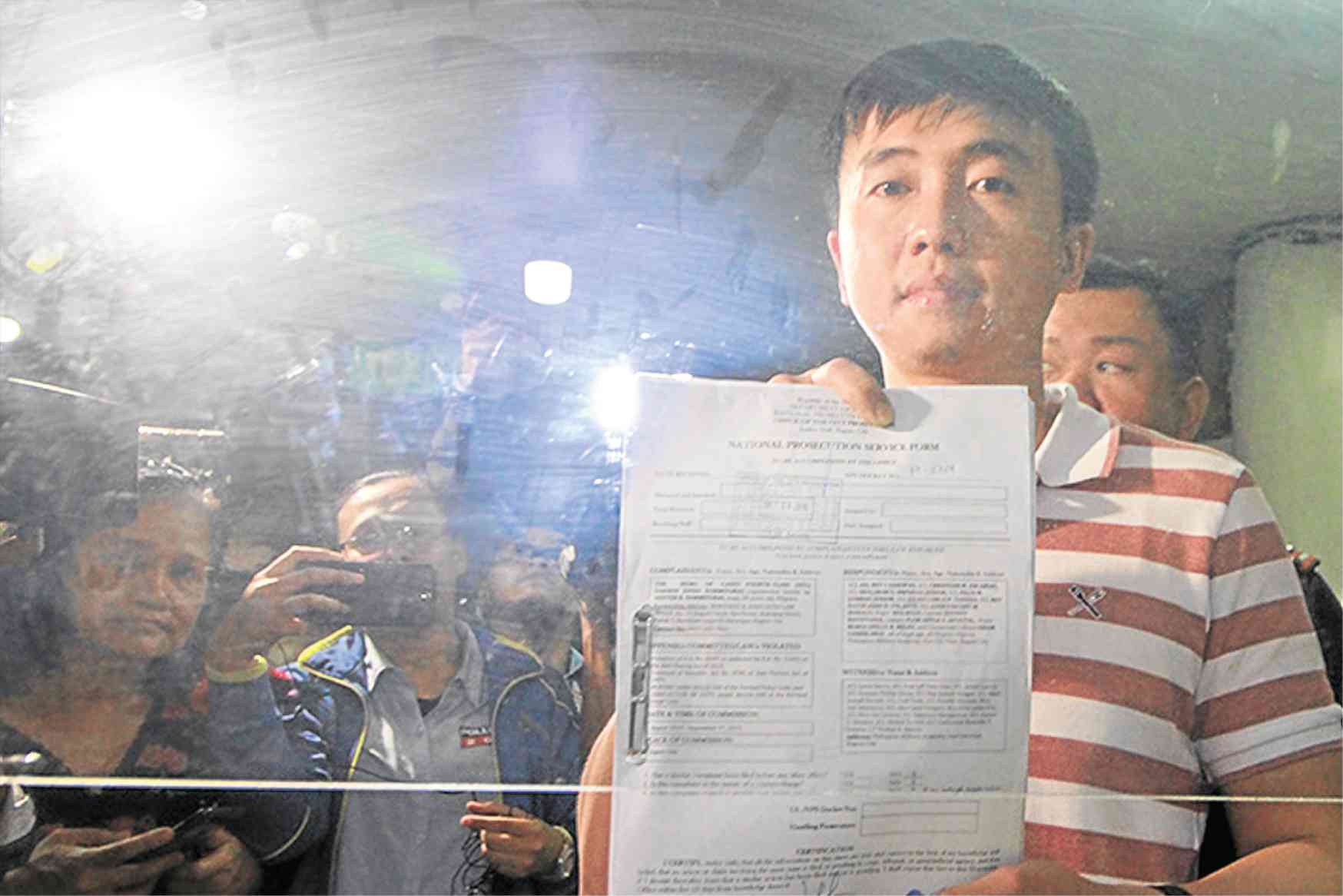 SEEKING JUSTICE Dexter Dormitorio, representing his family, files a criminal complaint against PMA officials and cadets over the death of his brother, Darwin, who was subjected to physical abuse in the military training institution.—PHOTO COURTESY OF NICOLE PAUS

“I would like to tell my brother that this was just the start of the battle. We will not stop until everyone responsible for his death is punished,” said Dexter, Dormitorio’s older brother.

Cadets 3rd Class Shalimar Imperial Jr. and Felix Lumbag Jr. were tagged as principal suspects for allegedly inflicting most of Dormitorio’s injuries through beatings that dated back to August. The police said witnesses could not explain why they targeted Dormitorio, a son of a retired military colonel.

Cadet 3rd Class John Vincent Manalo was charged with helping pin down Dormitorio when Lumbag and Imperial allegedly tried to suffocate him on Sept. 14.

Cadet 2nd Class Christian Zacarias allegedly assaulted the plebe earlier that day for sleeping in his bunk. But Zacarias alerted academy officials, who took Dormitorio to the PMA hospital in the morning of Sept. 17 when the latter complained of a stomachache.

After Dormitorio was discharged in the afternoon, Zacarias was one of the cadets who took care of the plebe who kept vomiting that same night.

Cadet 3rd Class Rey David John Volante allegedly kicked Dormitorio in the head on Sept. 17, according to fellow cadets, while Cadet 3rd Class Julius Carlo Tadena allegedly hurt Dormitorio using an unauthorized stun device in their barracks on the eve of his death. —Reports from Vincent Cabreza and Kimberlie Quitasol