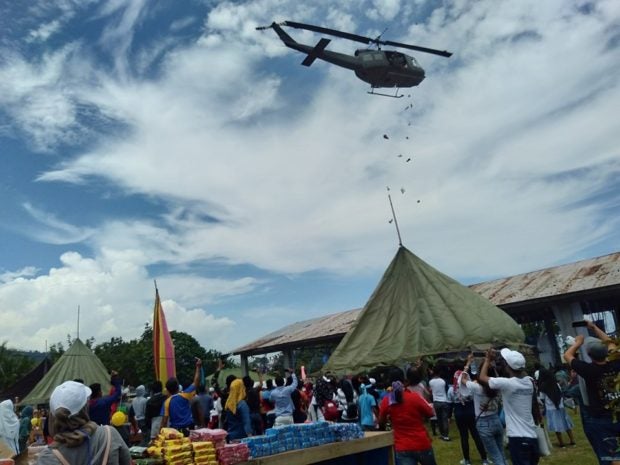 MANILA, Philippines — When the whipping blades of Philippine Air Force choppers roar in the skies of Basilan, it usually means military operations are underway.

But on Friday last week, two helicopters of the 206th Tactical Helicopter Squadron did not drop bombs but poured out toys, balloons and candies for the children of Barangay Tuburan in the town of Mohammad Ajul.

Basilan is an island province near Jolo, where some members of the Abu Sayyaf are believed to be hiding. Tourists usually can only get around when they have security personnel.

The island gets in the news from time to time when deadly clashes and military operations are reported.

In a separate statement, the Western Mindanao Command said the helicopter drop was aimed at helping the children recover from their traumatic experiences in seeing bombs drop.

About a hundred of these children are currently enrolled in the Program Against Violent Extremism, one of the government’s programs for Abu Sayyaf members who have surrendered to the government.

The outreach program was initiated by Dr. Arlyn Jawad-Jumao-as, founder of Save the Children of War Foundation, in collaboration with the Armed Forces of the Philippines, the Office of the Presidential Adviser on the Peace Process, the Basilan government and other stakeholders.