BEIJING  – China has demanded Washington lift sanctions on Chinese tech companies and warned it will “resolutely safeguard” the country’s interests. 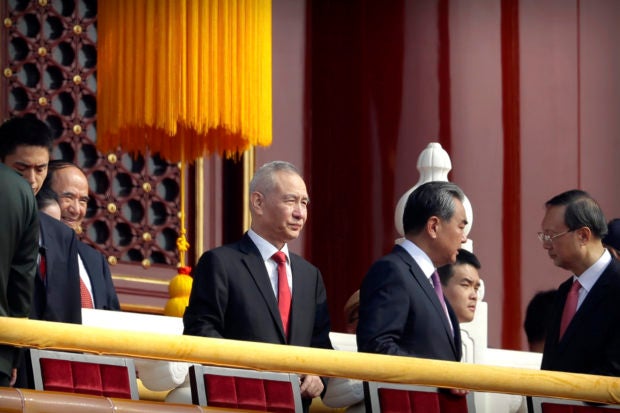 In this Oct. 1, 2019, photo, Chinese Vice Premier Liu He, center, stands on Tiananmen Gate near Tiananmen Square with other leaders before a parade to commemorate the 70th anniversary of the founding of Communist China. Liu will lead a delegation that includes China’s commerce minister and central bank governor and industry, technology and agriculture regulators to Washington on Thursday for talks aimed at ending a tariff war, the Ministry of Commerce said Tuesday, Oct. 8, 2019. (AP Photo/Mark Schiefelbein)

The Ministry of Commerce on Wednesday criticized curbs imposed on sales of U.S. technology to a group of Chinese companies as interference in the country’s affairs.

The ministry said Beijing will “take all necessary measures to resolutely safeguard” the country’s interests but gave no details of possible retaliation.

The measure announced Monday restricts sales of U.S. technology to a group of Chinese companies working on facial recognition, artificial intelligence and other advanced products. /gsg

Read Next
BOC intercepts P4-M worth of chemical refrigerants from China with no DENR permit
EDITORS' PICK
Smart sweeps Opensignal’s Mobile Experience awards in Cebu
EuroMillions Superdraw: A lottery draw unlike any other is coming to the Philippines
MRT-3 eyes reducing number of trains after 127 personnel get infected
DOH: Remdesivir shows ‘positive effects’ on COVID-19 patients but not conclusive
Smart releases Hyun Bin’s second TVC
Over 15,000 prisoners freed to decongest BJMP jails amid pandemic—DILG
MOST READ
Army: Soldiers, not cops, in CCTV footage in aftermath of Sulu incident
Lawmakers hit ‘very unfair’ NTC orders vs ABS-CBN
Army loses track of 2 Jolo bombers after agents’ slay
Mayor Labella: ‘Business is hurting in Cebu City’
Don't miss out on the latest news and information.