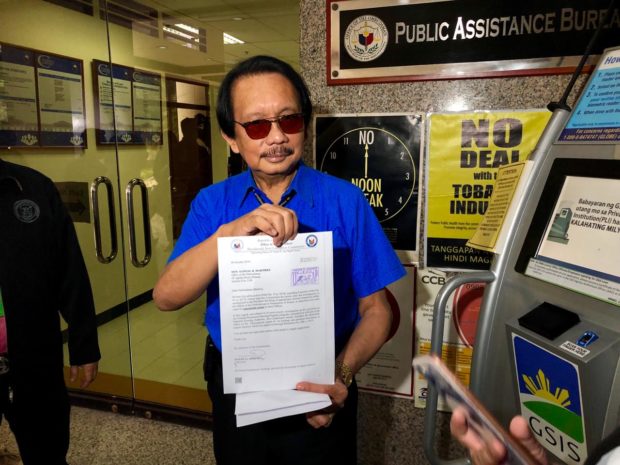 MANILA, Philippines – The Presidential Anti-Corruption Commission (PACC)  prodded the Office of the Ombudsman Wednesday to expedite the filing of administrative and criminal charges against former and current officials of the National Housing Authority (NHA) linked to an alleged fraudulent housing project for victims of super typhoon “Yolanda” in Eastern Samar.

PACC Chair Dante Jimenez said this recommendation was based on their findings that the 12 respondents “violated Sec. 8, Rule VI of the Code of Conduct and Ethical Standards for Public Officials and Employees; the Government Procurement Act; and Section 3(e) and 3(g) of the Anti-Graft and Corruption Practices Act.”

The PACC Investigation Service found prima facie evidence that the officials gave “unwarranted benefits, advantage, and preference” to a lone contractor  which was found to have “fraudulently misrepresented its technical capacity into entering contracts with the government for the nine projects for the YPHP (Yolanda Permanent Housing Program),” he added.

Jimenez said they also informed the Office of the President of their findings that the contractor failed to complete the construction of 2,559 units in four municipalities of Eastern Samar alone despite receiving an initial 15 percent or roughly P111.23 million payment.

After more than two years since a Notice to Proceed was awarded, Jimenez said only 36 units, or 1.41 percent, were completed when the contract–  worth P641.53 million– was terminated on Nov. 27, 2017.

The Commission refused to name the respondents.

Jimenez also castigated the House of Representatives for failing to file charges against NHA officials even after uncovering anomalies during the committee on housing and urban development public hearings in September 2017.

Jimenez also asked the Ombudsman to quickly validate the result of their six-month investigation, which he said was just the tip of the iceberg.

“I’m pretty sure with the leadership of Ombudsman Samuel Martires eh siguro naman mapapabilis na (the validation would be expedited),” he said.

Jimenez also chided the House of Representatives for failing to file charges against NHA officials after uncovering anomalies during the Committee on Housing and Urban Development public hearings in September 2017.

“Ang Kongreso natin imbestiga kayo ng imbestiga, ang daming nagagastos na people’s money. Karamihan sa mga investigations ninyo walang nangyayari. Why? (Congress keeps on investigating anomalies and using people’s money but most of their congressional probes has no results),” Jimenez asked, expressing confidence that the respondents would face the “harshest penalty of the law” with their pieces of evidence.

Supertyphoon Yolanda (international name: Haiyan) whipped Eastern Visayas and other nearby provinces on Nov. 8, 2013, and claimed over 6,000 lives and damaged billions of pesos worth of infrastructure.

As early as 2017, the Commission on Audit (COA) has urged NHA to sue its erring officials and an unnamed contractor who was awarded P654.6 million worth of housing projects for Yolanda survivors but is not qualified to handle big-ticket projects.

State auditors had said the low percentage of completion was caused by “land boundary disputes, issues on road right of way, unbuildable area on-site, non-issuance/delayed approval of permits, inclement weather conditions, change of site location/housing design, issuance of Notice and Order of Termination of Contracts, and termination of contracts.” /gsg